I have been a fan of the Predator franchise since I caught the first movie one weeknight on the WB. I was just in the fourth grade, but I remember it clear as day. The complete captivation, seeing larger than life action heroes like Arnold Schwarzenegger struggling against a mysterious alien hunter, is a feeling I get to relive each time I watch the 1987 classic. Even through the dark times of the franchise (looking at you, AVP:R), I have never been ashamed to call myself a Predator fan. Never, until today.

The sixth installment, simply titled The Predator, follows Boyd Holbrook as Ranger sniper Quinn McKenna. After his team is butchered by a crashed Predator, McKenna is committed to a veteran’s psychiatric hospital as part of a government cover-up. But not before mailing Predator tech back home to Georgia to be discovered and activated by his autistic son. Now, different Predator factions are after the missing gear, and McKenna must team up with other former soldiers from the psych ward to save his son.

If that sounds like a jumbled mess, that’s because it is. This movie is the crossover between Predator, One Flew Over The Cuckoo’s Nest, and Mercury Rising that nobody asked for. On top of that, the first 20 minutes flies at a mile a minute. Characters are thrown in with little to no introduction and honestly, I couldn’t tell you any of their names (I had to look up the LEAD CHARACTER’S name for this review). Instead, they’re just defined by their whatever quirk they have. I mean, who could forget “Guy With Tourette’s” or “Guy Obsessed With The Rapture” or my personal favorite: “Guy Who Is Scottish And That’s Literally It”?

That said, in a creature feature like this, you don’t need the strongest characters to move the plot along. But did every character have to be a comedian, too? The entire movie, every line of dialogue, is played for laughs. There isn’t a single sincere moment in this whole thing. Worse, the jokes aren’t even funny, using a horrifically dated and juvenile sense of humor. Between filthy “your mom” jokes and dropping an F-bomb every other word, this flick takes a page out of every middle school jokester’s repertoire and tries to sell it as blockbuster comedy. Even the Predator itself can’t get away from the jokes, at one point using a severed limb with a thumbs up to hide inside a mercenary truck. I didn’t realize the Predator was played by Wile E. Coyote. 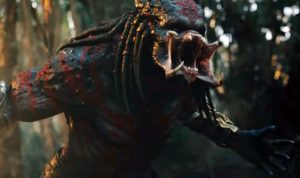 And that’s where the film goes completely off the rails: the Predators themselves. 20th Century Fox seems hellbent on retroactively ruining their classic sci-fi monsters. Last year, they did it with Alien Covenant by revealing the secret origin of the xenomorphs as “robot Michael Fassbender made them for the lulz.” This time, it’s Predator behavior that’s being retconned. In previous installments, Predators would rip out the spines and skulls of their victims as hunting trophies. Not anymore! This movie reveals they’ve actually been harvesting spinal fluid from strong specimens of other species to upgrade their own biology. This leads us to the Ultimate Predator: an 11-foot tall, ballerina-legged, entirely CGI piece of crap that comes complete with dopey Predator dogs.

Never mind the 30 years of movies, comics, novels, and video games establishing these creatures as honor-based hunters. Nope, they just wanted our DNA all along so they could take over the planet after global warming wiped us out (???). Oh, and did I mention that the name “Predator” is now the in-universe term for their species? I cringed every time I heard it said out loud.

There are only two things I can say positive about The Predator. First, Henry Jackman’s score is pretty good, mostly because it liberally uses Alan Silvestri’s music from the first one. Second, the normal Predator (seen in all the trailers and portrayed practically by a man in a suit) looks pretty fantastic. It’s just a shame that he gets his head ripped off by the aforementioned CGI oaf before the halfway point.

Predator fans, don’t be like me. Don’t sit there in the theater, gritting your teeth and desperately hoping the movie will end sooner rather than later. Save yourself the heartache. Skip this one.