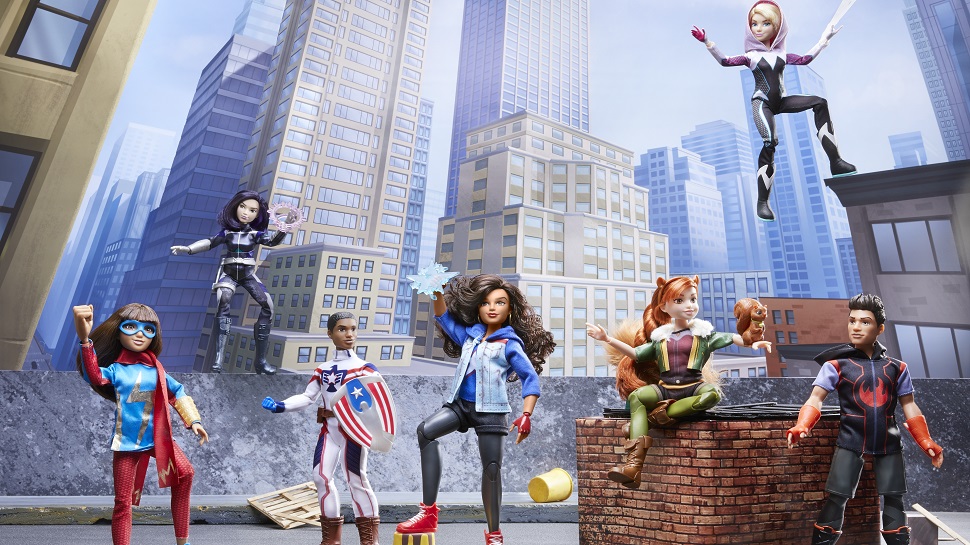 Nerdist.com reports that last year, the folks at Marvel announced a new initiative called Marvel Rising, which would focus not on the well worn (and mostly male and white) heroes that fans have come to know so well, but instead, would focus on a diverse group of rising super heroes such as Spider-Gwen, Squirrel Girl, Ms. Marvel, Quake, Inferno, America Chavez, Patriot, Exile, and future movie star Captain Marvel. The Marvel Rising: Initiation shorts can be currently seen on Disney XD and Marvel HQ on YouTube, and the feature-length film Marvel Rising: Secret Warriors is set to premiere on Disney Channel and Disney XD on September 30. Now, the folks at Marvel and Hasbro are introducing a brand new line of toys inspired by the storyline and characters introduced in Marvel Rising, and are very much in the same vein as the recent and super cool Star Wars:  Forces of Destiny line. This dynamic new series of toys includes 11-inch scale dolls, along with innovative role play gear to complement the animated franchise, and will be available exclusively at Target stores starting in October.

In the world of Marvel Rising, super-powered kids balance their ordinary lives with their extraordinary ones to discover that their greatest powers lie within. Strong on their own, but even stronger as a team, these super teens use their unique skills and experiences to unlock their potential and find the confidence to better the world. These new dolls come in a variety of forms, including Training Outfit, Secret Warriors, and Secret Identity assortments, with the latter including superhero and civilian clothing. You can check out images of these exciting new line of toys down below in our gallery.

Are you excited in this next evolution in the world of Marvel heroes? Be sure to let us know your thoughts down below in the comments.