Believe me, Nerdbot was in full effect at this year’s Long Beach Comic-Con.

Have you ever heard of Reggie and the Full Effect? Yeah… it was like that. 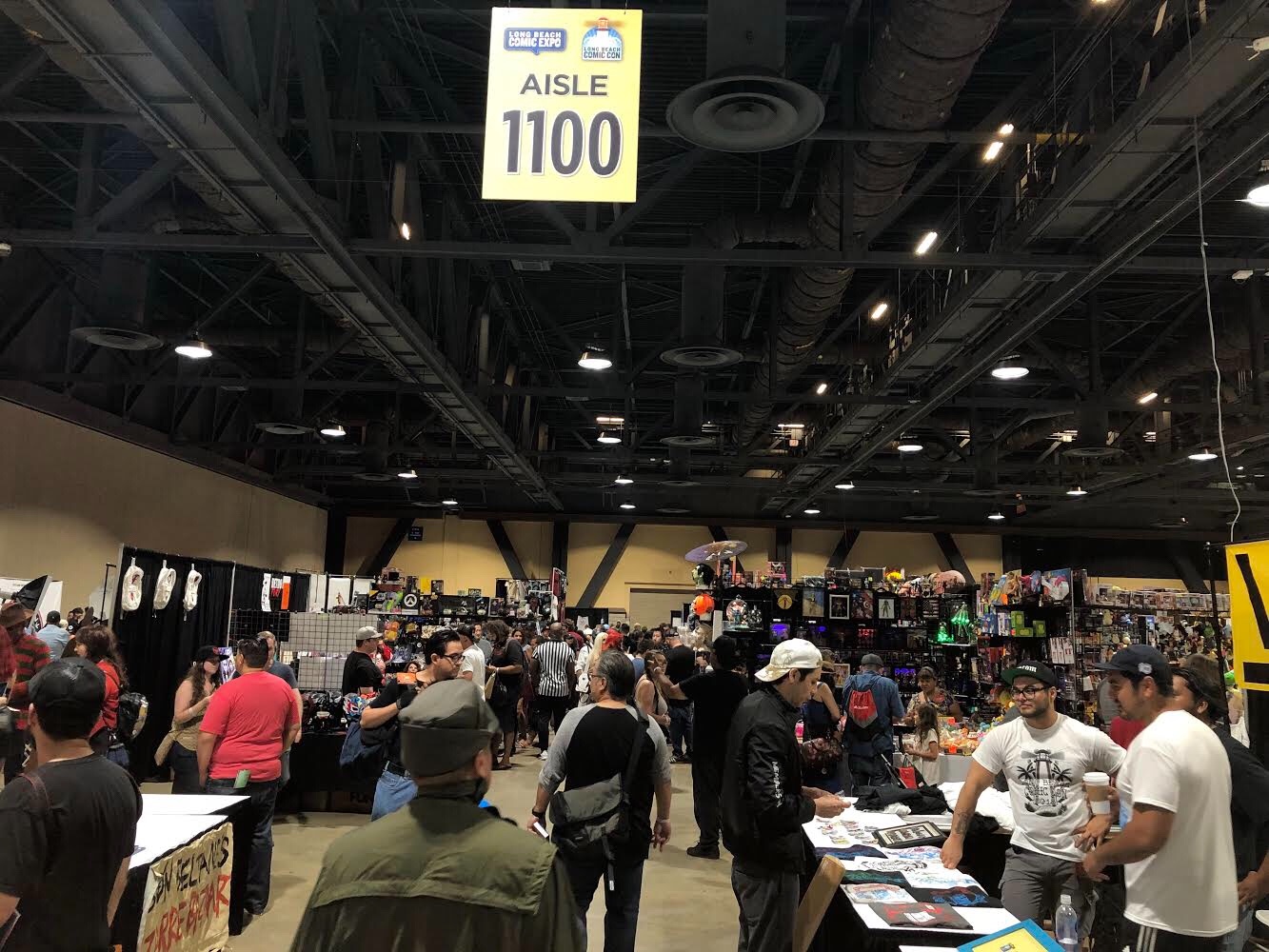 Nerdbot was fortunate enough to have the opportunity to partner up with Mad Event Management, the excellent team of convention show runners lead by Martha Donato to help make LBCC…well… a little more nerdy. Nerdbot heeded the call full throttle by bringing the house to the LBC that even included live interviews on our Facebook page, the Nerdplay Girls partying at their booth, and life sized Teenage Mutant Ninja Turtles costumes, And yes, you’d better believe people lined up to take pictures with those beauties. It proves a point I’ve been making for years; put something cool up, then people will naturally create their own photo opportunities. Hashtag truth. 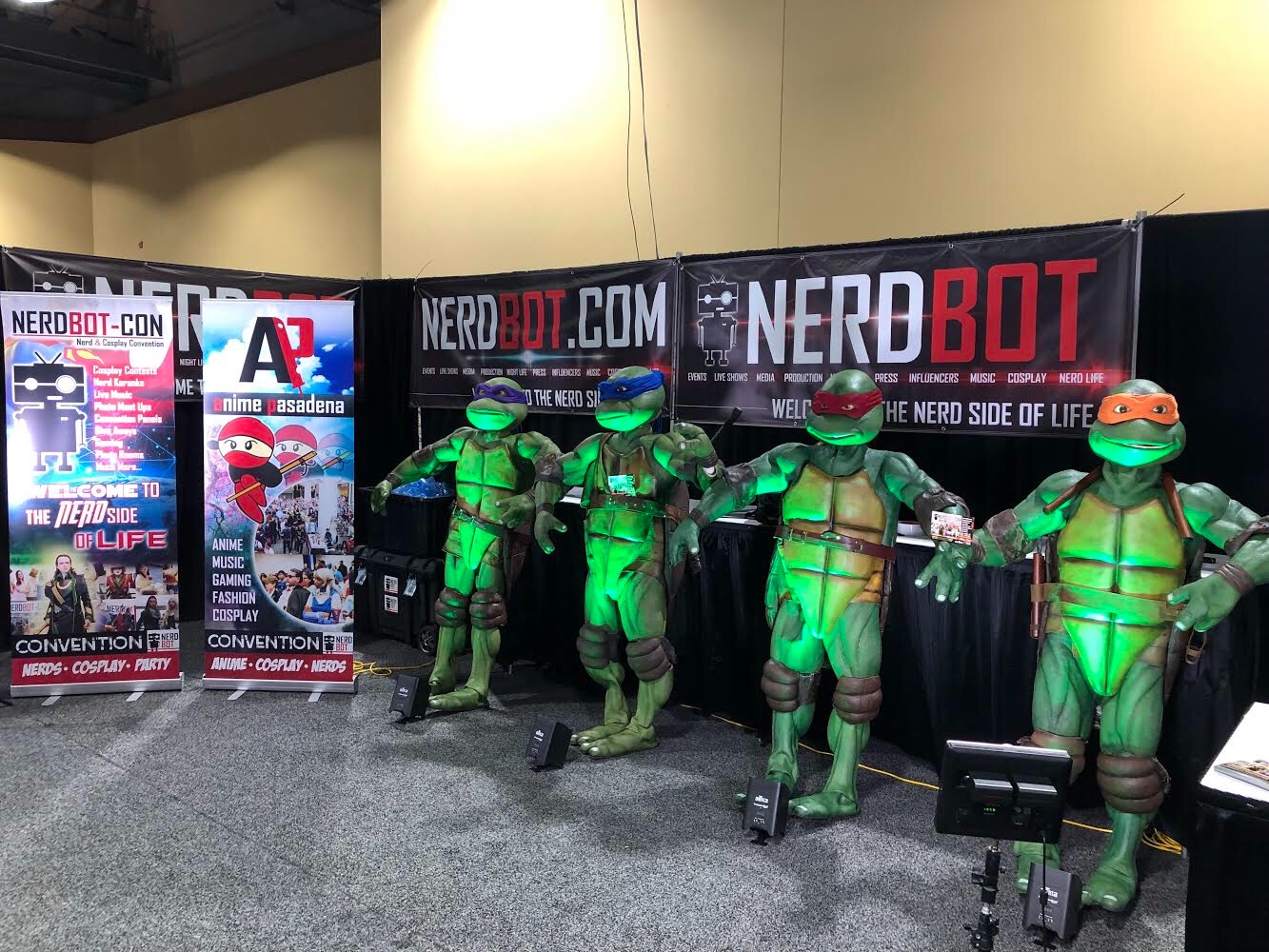 You bet the morning started off on a high note. Nerdbot’s own Kurt Broz sat down with actor/DJ Kristian Nairn, Hodor from Game Of Thrones this morning. The 6’10” man from Belfast, though tired, was a warm, welcoming delight for fans who were about to begin their convention experience.

Narin shared stories of his world travels, (dude’s traveled thousands of miles this week), running into fellow Westerosi cast members at the LAX In-N-Out Burger (no names were dropped), and an adorable encounter with Sally Field. Even those who are almost seven feet tall can turn to mush around their favorite stars. It happens, you’d do it too. Remember, celebrities are just like us, right?

Just so you know, questions regarding the final season of Game Of Thrones, and believe me, some folks tried to get what they could out of him, were handled beautifully. The PR people at HBO would be very happy, we got nothing. However Hodor did let us know it “will be the best one yet!”

I was given the opportunity to ask Kristian a question during the panel, and with his DJ career blossoming I felt it only appropriate to ask about his tastes in music. Much to my surprise it wasn’t club popping EDM at the top of his list, but heavy metal. Megadeath, Danzig, a comment on not being into new-metal, who can blame him. What I found incredibly interesting was he toured with Calvin Harris before Calvin Harris became Calvin Harris. Maybe one day Narin will headline Bonnaroo, the way that festival is going it’s entirely possible.

Next was a full afternoon of Nerdbot broadcasting live on Facebook and wandering around trying not to spend my entire first LA paycheck. 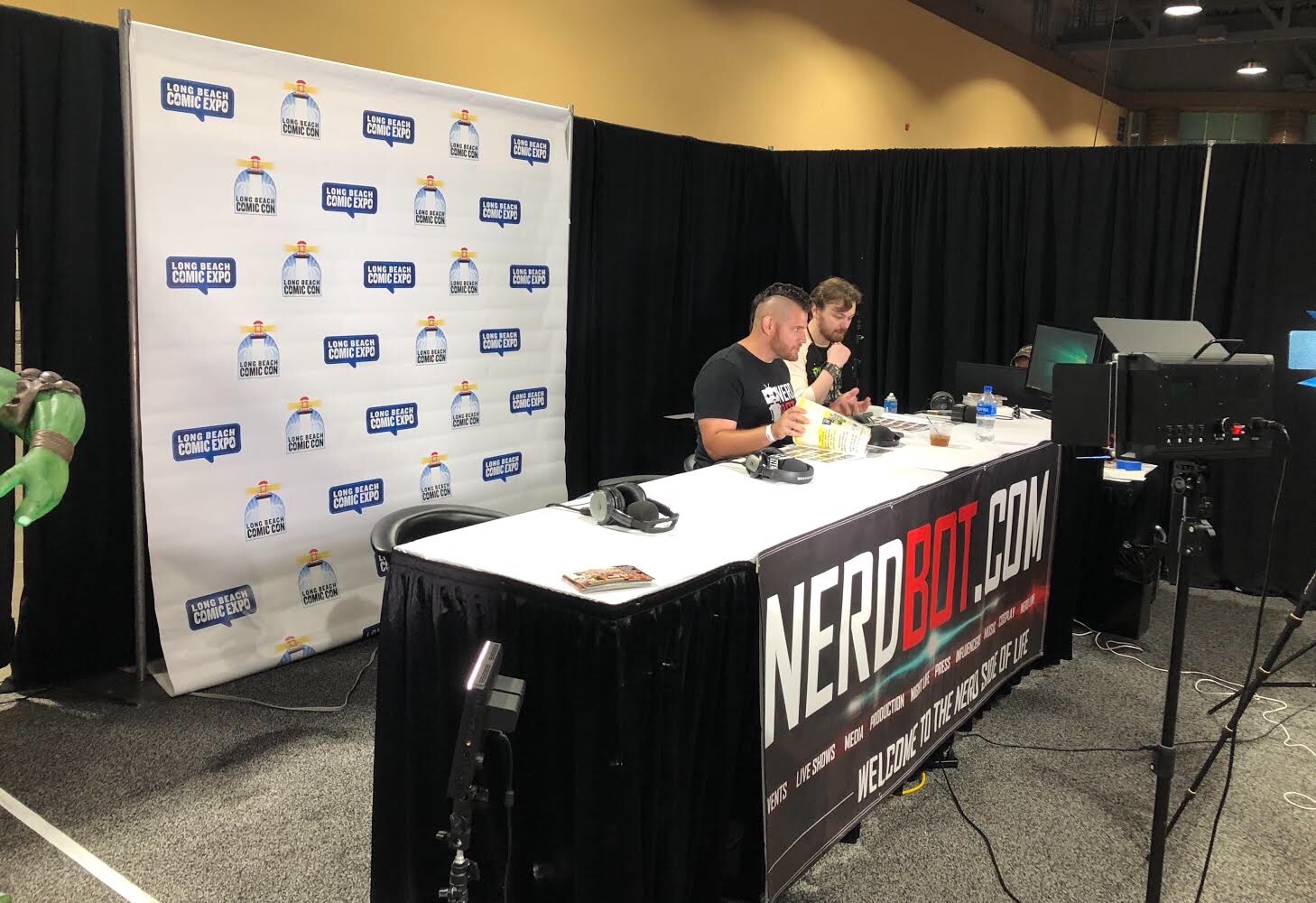 Jeromy Dechant along with Kurt, and Rob Armatys running the boards, set up shop in the Social Square to begin a marathon of interviews that included a variety of guests. Jack E. Curenton (Star Wars fanatic), Tony Kim (founder of the Hero Within clothing), Tom and Brian Nagel (from the movie Toy Box), Ben Dickow (President of the Columbia Memorial Space Center), Colin K Bass and Michael Macrae (from the Reverse Flash Origin series), this was only the first day. In case you didn’t know, Nerdbot has a bunch of quality programming coming at you via our Facebook page, so check us out sometime.

Tag teaming with Jeromy Dechant on Sunday was Nerdbot’s Editor-in-Chief Loryn Stone for an exclusive interview with Martha Donato and Kris Longo of Mad Event Management. Not only did they discuss the history of Long Beach Comic Con (this show is the 10th in production!) but they let us know about C3, the new comic book and artist professional networking convention that will be held the Friday before Long Beach Comic Con and their February show, Long Beach Comic Expo! 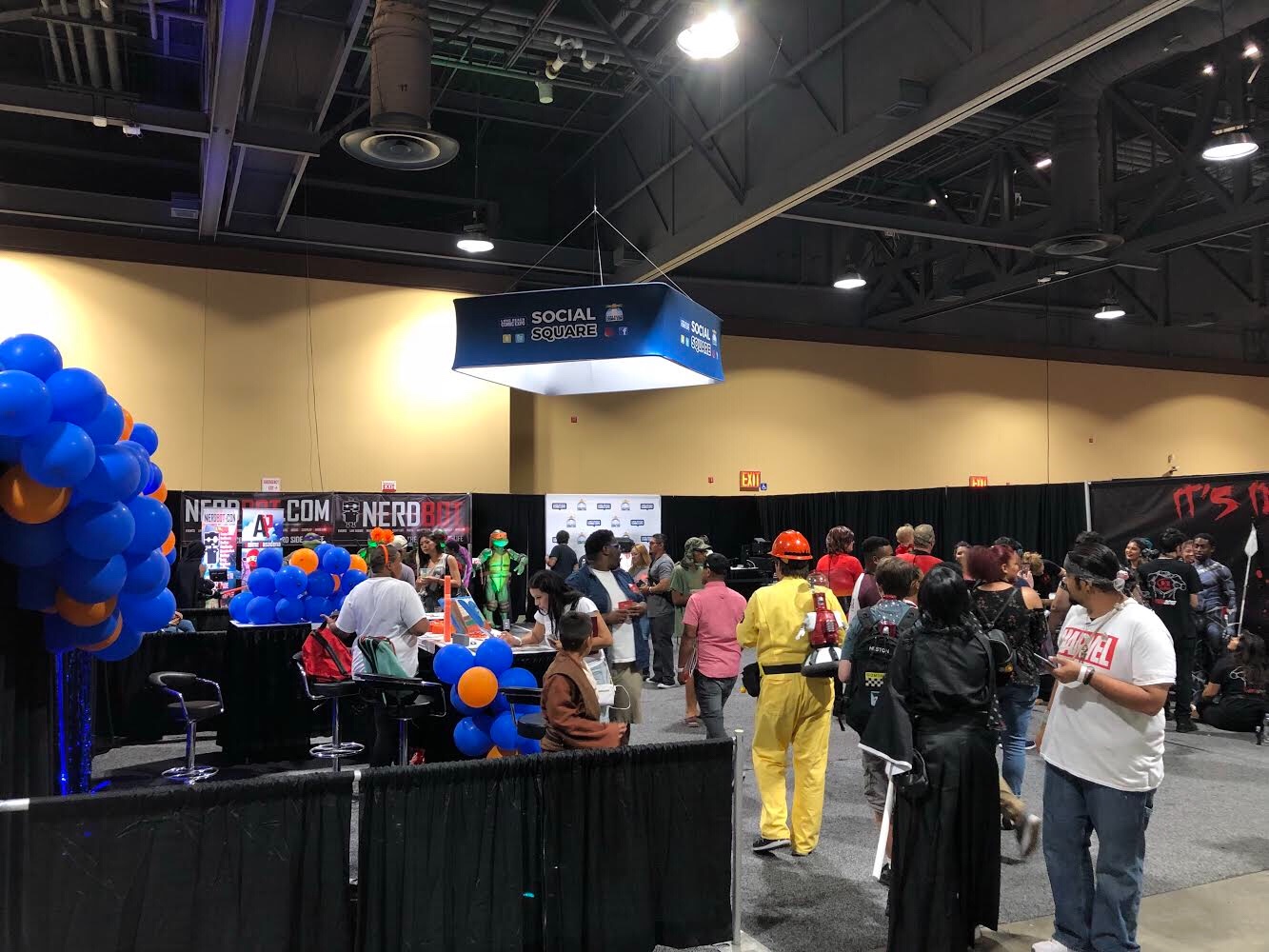 When I said I had to do my best not to spend my entire paycheck, truer words have never been spoken. The floor of a comic convention is a pop culture retail wet dream. Of course you have all the graphic content you can imagine, but where these places really shine, is items that fit in the palm of your hand. Refrigerator magnets (personal favorite), custom buttons, pins, Funko figures, characters from our lives juxtaposed into forms of art that walk the line between genius and abstract. 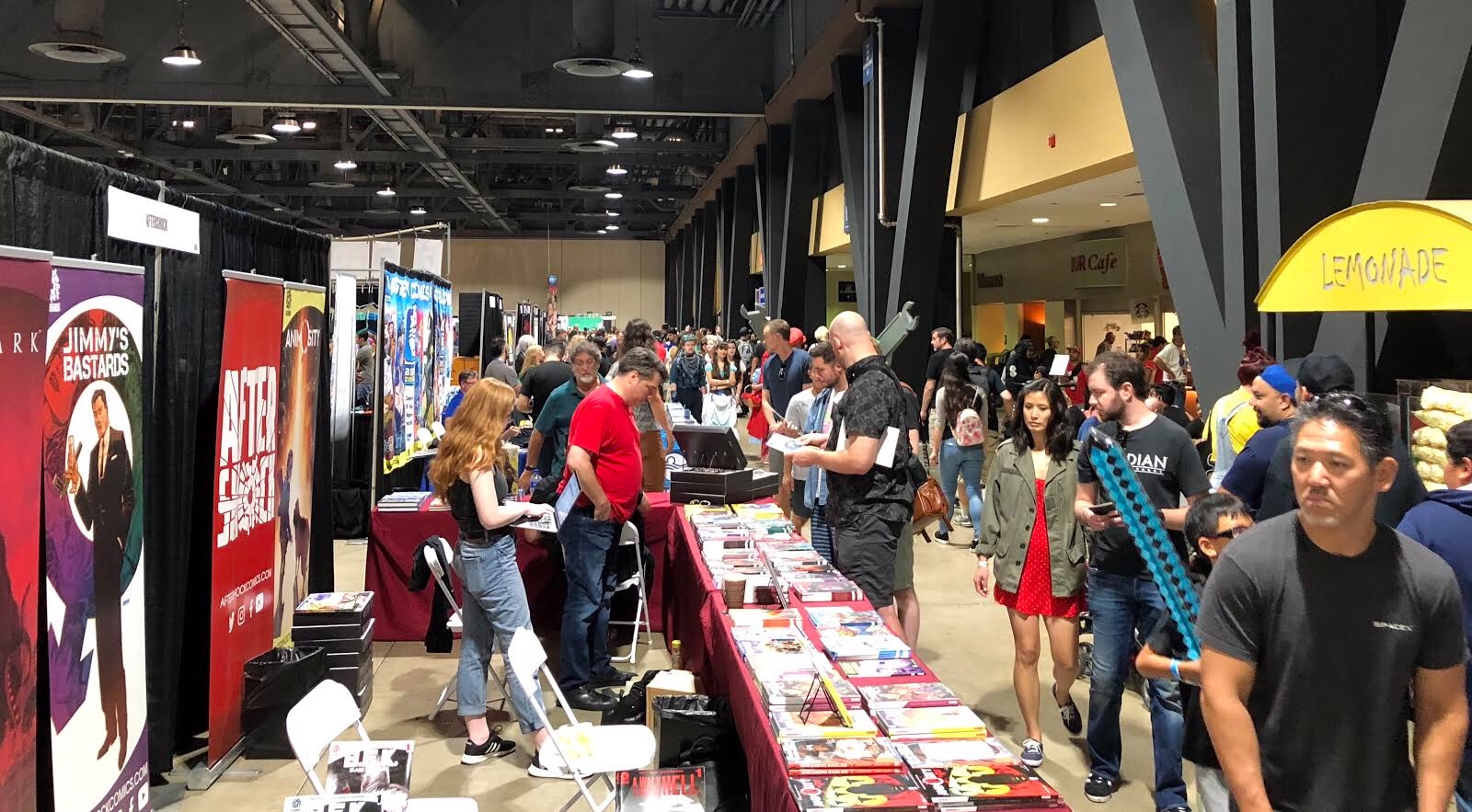 Have you ever seen a lapel pin of a shirtless Morrissey in handcuffs? Because I have… now I own one. There’s something about the Moz I love and hate at the same time. But that’s the intrigue of one Steven Patrick Morrissey.

To end on a personal note; I guess I’ve always displayed loneristic personality traits. There’s an inescapable beauty in solace, whether it be for comfort or coping, we all need a little time to ourselves. However today, while walking around the floor with the Nerdbot crew, or discussing an unexpected brilliance of the dude who played Reverend Newlin from True Blood with my fellow nerds. I had felt a sense of community that had been lost on me for years. 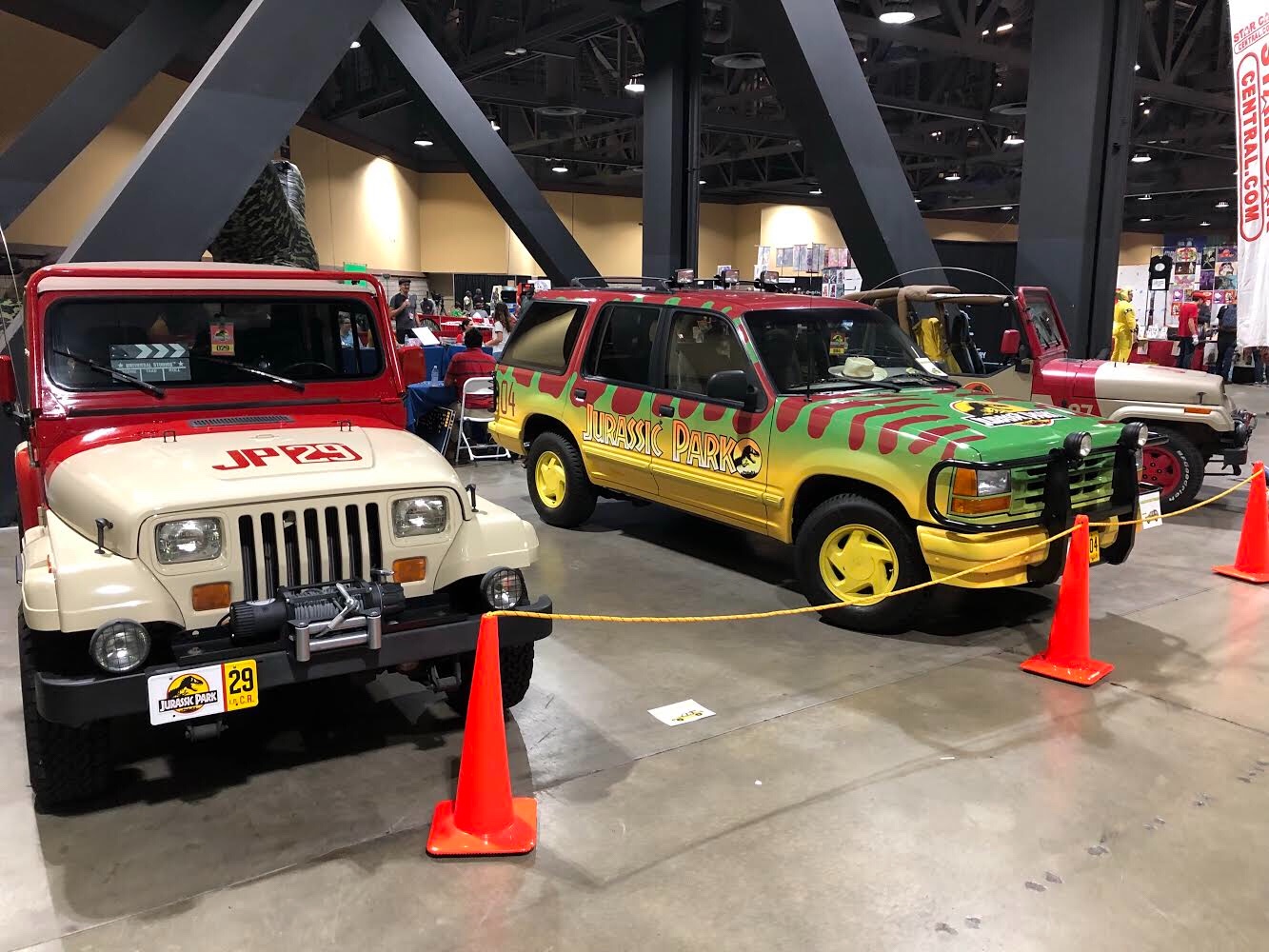 In the end, I realized community is what these events are all about. People gathering together with a common interest. Same with concerts, weekly poker games, writers groups, book club, or those Critical Mass things where a bunch of people ride bikes and stuff. As humans, we seek a level of acceptance from others. The people that surround us define who we really are. If it takes a convention center in Long Beach to be the venue for such acceptance… then so be it.

Did you attend Long Beach Comic-Con this year? Let Nerdbot know in the comments!!