6 Incredible Books That Will Rock Your Face Now

Nerds love books. And here at Nerdbot, we’re not only comic book and movie nerds, but reading amazing novels is an amazing way to stimulate all the senses. So today, we’re counting down 6 amazing books that you can add to your reading list today.

One of my favorite novels comes from the Dragonlance Preludes series of books and is a story set before the events of the War of the Lance, Brothers Majere by Kevin Stein. Twins Caramon and Raistlin Majere are broke and looking for jobs to make them decidedly less broke, when they come upon the town of Mereklar.

The town has been experiencing a peculiar case of its cats going missing, and oh there’s some pesky murders afoot as well. The twins yield the help of kender Earwig Lockpicker to solve the mystery and once again, become decidedly less broke in the process. One of the running gags of the story is the townsfolk of Mereklar constantly getting Earwig’s name wrong.

Brothers Majere has dark magic, sorcery, a beautiful seductress and intrigue but isn’t quite as foreboding or serious in tone as the later Chronicles trilogy. This is a brisk, fun read and is a book I read more times than I could count all throughout high school.

A Court of Mist and Fury by Sarah J. Maas

Funny enough, this novel is actually the second in the A Court of Thorns and Roses series by Sarah J. Maas, and the second of (two) fantasy series she is in the process of writing. (The first series is the Throne of Glass series, which is about seven books deep and is fantastic.) But the Court of Thorns and Roses series is irresistible and one I consume with enthusiastic fervor.

The first book is a Beauty and the Beast retelling about a young woman named Feyre who is given to a masked shape-shifting beast named Tamlin by her father and sisters after she kills his friend to protect her family. The beast turns out to be a cursed Prince of the Spring Court and Fayre is the one who needs to restore the kingdom from the clutches of an evil sorceress queen named Amarantha. Amarantha had taken a high faerie named Rhysand captive and was using him as a sex slave. Feyre thought Rhysand was her enemy…but he was in fact, the opposite.

Enter the sequel, A Court of Mist and Fury. This is where the fairy tale nonsense is dropped and the series really becomes its own. While the courting between Feyre and Tamlin in the first book felt natural and sweet, her slow burn with Rhysand is nothing short of fire. A strong story with incredible, unforgettable characters, coupled with fiery passion and deliciously satisfying lusty scenes make for a world you want to be a part of. The third book, A Court of Wings and Ruin was also very strong and satisfying, with only a few scenes that bordered on schlocky. And fortunately, the fourth book A Court of Frost and Starlight will be out this May by Bloomsbury. Believe you not, I will drop everything I am doing to pound it down in a hurry.

John Dies at The End by David Wong

I’ve read my fair share of horror books, and I’ve ready my fair share of comedy books.  But when you combine the two, you either get decent comedy and few – if any – scares, or a book that is heavy on the fright and light on the comedy.  Wong’s book is the perfect intersection of these two: it’s legitimately scary in several places and is utterly hilarious from start to finish.

But at the risk of turning into one of those guys who has been into that band since they were playing in small clubs, man, I’d like to say that this book is much more than scary and funny to me.  This book is, simply put, nostalgic.  There are quite a few shout outs to David Wong’s earliest work (Wally’s Videe-Oh!, having two people play a sports video game against the CPU, et cetera) that remind of some of the deepest laughs I’ve ever had.

This book isn’t just scary. It’s not just funny.  It’s a time capsule of one of the funniest people I’ve ever read, and that’s why I recommend it.  To pick up your own copy, merely go buy it at a bookstore.  I’m not your caretaker.  You can figure this out.  You found this website, you know how to browse the Internet; I’m sure you can figure out how to exchange money for a book at a place.  If you really don’t, I’ll show you for $500.

For those of you who don’ know, this book is part of the Discworld series, a set of about forty books that all take place in-you guessed it-the Discworld. A flat world balanced on the back of four elephants, who themselves stand on the back of the great turtle A’tuin. If that doesn’t already have you hooked, then what are you doing with your life? Reaper Man is one of the Death and company books, which follow-you guessed it again-the anthropomorphic personification of Death in the Discworld. The story follows what happens when Death is fired as death and made to live as a mortal on earth. The whole story is full of an incredible amount of heart, as Death ruminates on his duty and his place in the world. It dwells on all kinds of philosophical themes and ideas, like the point of life, and the power of our own perception of things. And most of all, it asks the question of what exactly the point is of kindness or mercy or justice in a world where those things are just ideas, devoid of any weight in an objective universe. And it answers; because they’re devoid of weight. Because if we aren’t merciful, if we aren’t kind or just, then no one else will be. I have an automatic affection for any story that features death as something other than a dour, terrifying figure, and this story quite literally humanizes Death. Pratchett makes him someone we can relate to, by making him relate to us, and he does it all while being consistently hilarious, with frequent injections of awesome.

The Gun Seller by Hugh Laurie

How many people on this planet could make a story involving international arms deals, intelligence agencies, and terrorist groups genuinely funny? I’d argue they can be counted on your fingers, and Hugh Laurie is at least three of them. I can’t stand Tom Clancy-type espionage novels, but The Gun Seller is so much more than that. The protagonist, Thomas Lang, isn’t a superhuman spy. He’s a run-down, retired military officer who has an affinity for drinking. He’s not so much James Bond as he is a grizzled cop, two weeks from retirement.

When Thomas decides to do a good deed for a stranger he’s been hired to kill, the universe chooses to punish him for it. What follows is a series of events packed with as much wit as it is action. Place Wooster from Jeeves and Wooster in the plot of a Tom Cruise movie and you’ve got something that’s still not nearly as entertaining as this book. You can tell Laurie did his research when he writes about the more technological stuff, but it never comes across as intimidating for the reader. If you like your spy novels grounded and entertaining, order The Gun Seller – shaken, not stirred, of course. 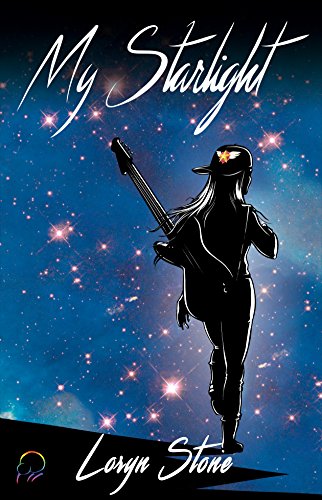 My Starlight by Loryn Stone

No, we are not just recommending this amazing novel because it was written by Nerdbot Editor-in-Chief Loryn Stone (although we wouldn’t stop you if you wanted to purchase a copy and support her work!). My Starlight is truly one of a kind in its genre. How many young adult novels are there about cosplaying, anime clubs, convention life, and a bisexual romance are there that take place in the familiar high school setting? That’s right- almost none. My Starlight is a book geared toward any queer or simply nerdy person who has ever felt like a marginalized outcast. Or simply fell in love with the wrong person.

My Starlight follows Jewish American bisexual nerd Orly Kochav, a girl reeling from the loss of her mother. She’s unsure of how to balance her feelings for the people and situations around her. Ultimately, this girl has a lot of midguided and misplaced feels. Something many of us can identify with. And with the underlying theme of “If only we could have met sooner”, My Starlight is a gentle reminder to embrace the life you have- because time could be up before you know it.

What are some of your favorite books? Have you read any of the titles on the list? Tell Nerdbot about it in the comments!