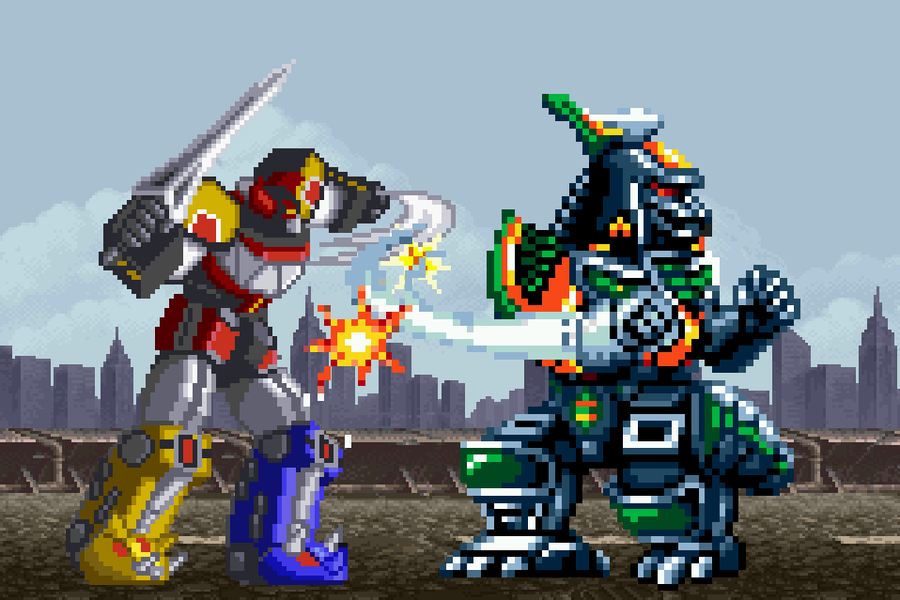 The only thing more exciting than watching Power Rangers is watching that awesome moment when the Rangers’ zords combine and form a huge Megazord. A lumbering robot with an amazing weapon ready to stumble toward the bad guy and kick some Tokutatsu Chogokin ass. But naturally, not all Megazords are created equal. Here’s my list of my Top 10 favorite Megazords of all time.

Sure, the CG is a little crude, but the end result is just so good. With it’s amazing wing-span and sharp angles, the Titan Megazord is just super cool and clean looking.

Sure, this bringing over the full season of the pirate-based series Gokaiger where infinity billion sentai teams appear might have been a difficult task, but that doesn’t make this Megazord any less awesome!

The return of Power Rangers to the hands of Haim Saban brought forth an incredibly engaging season of the show. Not only was the actual story of Samurai fun and engaging, but the zords themselves were great. And when the sleek and scrappy Megazord showed up, it was excitement all the way!

Making its debut as the second Megazord (and taking footage from a completely separate Super Sentai season) the Thunder Megazord was mindblowing. The fire. The lightning. The huge green gem. This sucker was a beauty and powerful as hell!

Wildforce was another one of those seasons that stood out for its strong story. But that wasn’t all it had going for it! With its majestic crown and huge barreled lion’s chest this Megazord is a king among the battle machines.

When the Green Ranger lost his power and was recreated as the White Ranger, he got his own full-sized Megazord. While the White Tiger Megazord may not be a full qualifier among some fans, the thick, bulky bot has an undeniably awesome design that earns it a place on this list! (And watching Saba’s little mouth move when he talks is so damn cute!)

The design of this beast is just amazing. It has the familiar elements of a Transformer, with the small nuanced touches of 80s mecha that are just so powerful and glorious. And the sight of it transforming among the backdrop of space blackness with pew pew laser sounds make me happier than it should.

Whereas the Astro Megazord has the Transformers flair, the Lost Galaxy Megazord teeters more on Voltron. It’s thick chunky aesthetic makes for a classic look and affects the way it moves in such a cool way. And come on, that Ape zord forming the legs and belt is just so freakin’ cool. It’s got a Henshin belt, people! Any Megazord that wears a crown wins a place in my heart.

Similar to the White Tiger Zord, the Dragon Zord was the Green Ranger’s stand-alone zord. One part Mecha-Godzilla and forty parts awesome, this beautiful creature rose from the sea when summoned by the Green Ranger’s synth-based Power-Flute. And you know we all stood on rocks and pretended we were Tommy making this beauty rise from the depths, don’t deny it! He may have started bad, but in the end he was combining with the Megazord to take down the baddies too!

To this day, just hearing the phrase “Megazord sequence has been initiated- Megazord activated!” is enough to give me chills. All early Power Rangers fans have a special connection to the Dino Megazord. With his horned helmet and lightning sword, he was like nothing else we’d seen. Even seeing him rise and stand up is emotional for me. We always cheered for him and knew he would use his strength to save the day! Power crystals out!

Did we miss your favorite Megazord? Tell Nerdbot which one you love in the comments!