Spider-Man is swinging his way back into theaters with his first animated movie! But Peter Parker is going to have to share the spotlight this Christmas. Into the Spider-Verse revolves around Miles Morales, Peter Parker’s successor from the Ultimate Universe, as he meets Spider-Men from across different dimensions.

We already have confirmed appearances by classic Spidey, Spider-Gwen, Spider-Man Noir, Spider-Ham, and mech-suit pilot Peni Parker. There are countless other iterations of Spider-Man that could appear, too. Spider-Man 2099 is probably a shoo-in, along with the Jessica Drew Spider-Woman, Ben Reilly’s Scarlet Spider, and the classic Spider-Girl, Mayday Parker. But how about those Spider-Men that are too peripheral, too convoluted, or just too weird to be tossed into the mix? Is there even such a thing as too weird when Peter Porker the Spider-Ham is already confirmed? Here are just a few that may not make the cut, but would love to see anyway. 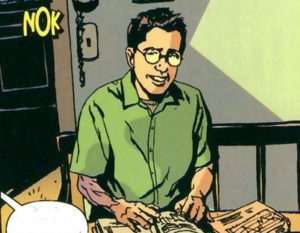 Spider-Man may have great responsibility, but not all versions have great power. Case-in-point, Powerless Peter Parker. As the name suggests, this Parker didn’t gain any superpowers from a radioactive spider bite. Instead, he gets an immediate infection that completely atrophies his arm.

Despite his lack of powers, this Peter still manages to fight crime by incriminating Norman Osborn in industrial espionage. Unfortunately, a powerless Peter Parker might not be well suited to an animated epic. 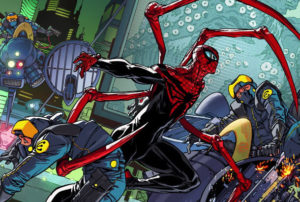 What do you get when you cross the body of Peter Parker with the mind of Doctor Octopus? A Spider-Man with a twisted idea of justice. After swapping bodies to escape his own death, Doc Ock inherits Peter’s memories and sense of responsibility. However, he also remains an arrogant douche and sets about to prove that he’s the best at doing whatever a spider can. Killing his enemies, assembling armies of minions, and calling everyone he sees a “dolt,” this Spider-Man is anything but “Friendly Neighborhood.”

Superior Spider-Man could provide an excellent straight-man when paired with a sea of wisecracking Parkers. But with so many Spider-Men already, and a clear focus on Miles Morales, can they really take the time to explain the “Ock-In-Spidey’s-Body” gimmick? His backstory might just be a bit too convoluted for this one. 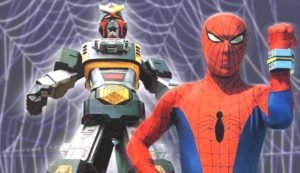 Change, Leopardon! This is what you get when you give the studio behind Super Sentai the chance to do their own Spider-Man show. This cult classic (often called Supaidaman or Spy Darma in reference to the theme song) follows Takuya Yamashiro after he is injected with alien blood from the Planet Spider to fight Professor Monster and the Iron Cross Army. If you couldn’t already tell, Toei Studios were not required by Marvel to keep any story elements in their adaptation.

All the better, since this let them throw in a butt-kicking robot! Spidey’s massive mech Leopardon absolutely MAKES this character. Even Stan Lee had to admit that the robot was wicked cool. This Spider-Man, with Leopardon in tow, was brought into official Marvel canon in the Spider-Verse event comic. Fingers crossed for at least a Leopardon cameo in the movie, but with one mecha Spidey already confirmed, it may be a bit too crowded for more robots. 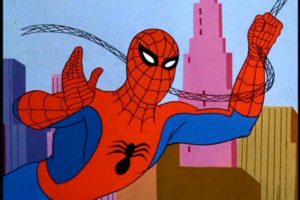 Want the charm of a classic Spider-Man comic with the animation quality of Hanna Barbara’s Jabber Jaw? Look no further than the 1967 series, Spider-Man’s first-ever foray into cartoons. This version is best known for its jazzy theme song (I mean, how else would we know he could spin a web of ANY SIZE?), not to mention its colorful and lighthearted style. This show tended to get pretty goofy, though. In recent years, folks have taken especially zany frames from it and made memes out of them. But that’s only bolstered Spidey’s legend!

‘60s Spider-Man was considered unique enough to feature as an alternate universe in the Spider-Verse comic, where he was visited by Miles Morales and Disney XD’s Ultimate Spider-Man. There, the distinct art style of the ‘60s version set him apart from the crowd. But with Into the Spider-Verse going for such a unique look, a character who exists solely to deviate from that look might be out of the cards. Case in point… 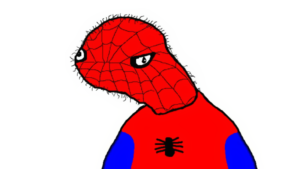 Not officially sanctioned, not well-spoken, and certainly not well-drawn, Spoderman is a meme character that showed up around 2012. Created in the vein of Dolan Duk, Spoderman comics usually end with the distorted hero crying over Uncle Ben puns.

With all the great Spider-People to put into Spider-Verse, Spoderman does not deserve a spot. But just think about it. A room full of awesome spider heroes from past, present, future, and everything in between…and this thing just lurching around in the back. Occasionally muttering “y u do dis.” I’m going to love the movie either way, but I feel like I need a bit of extra Spoderman in my life.

What Spider-Men do you want to see in the movie? How excited are you for the ones already confirmed? Let us know in the comments!