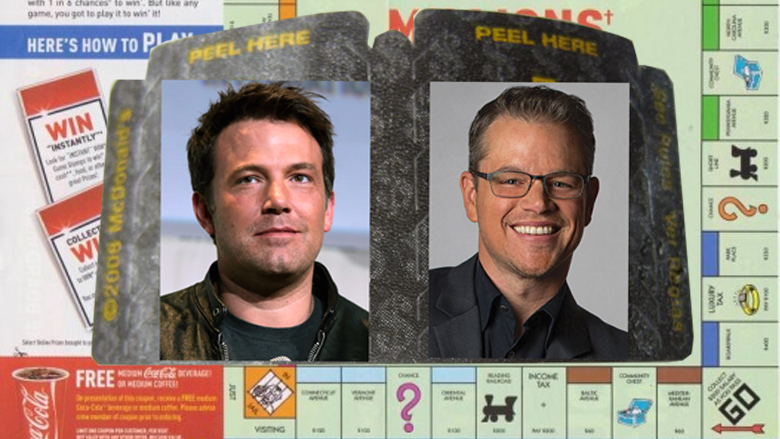 Ben Affleck is set to direct a new McDonald’s movie centering around a McDonald’s  Monopoly rigging. Matt Damon is set to star in the film as the man who broke the system and conned McDonald’s out of $24 Million. Pearl Street Films is set to produce and Deadpool writers Paul Wernick & Rhett Reese will be responsible for the script.

This isn’t the first time that we have seen a McDonald’s movie come out and it probably wont be the last. The Founder, which was about how McDonald’s came to be was currently released in 2016 and grossed  over $21 Million in the duration of being in theaters. That movie also based on Ray Croc, the man that wedged his way into the Billion Dollar corporation and essentially screwed over the McDonald brothers. The movie that Ben Affleck has signed up to direct according to deadline is about “2001 in Rhode Island, as a million dollar check is delivered to a man who said he’d won the $1 million grand prize after collecting Monopoly pieces attached to food products, defying the 1 in 250 million odds and modeled after the venerable board game that the piece says was invented as a warning about the destructive nature of greed. A camera crew was dispatched to hear how the man won, and they chronicled his series of lies. They were FBI agents closing in on a sting that began with a tip about an “Uncle Jerry,” who’d sell stolen game pieces. Solid detective work unearthed Jerry Jacobson, a head of security for a Los Angeles company responsible for generating the game pieces. It led to a wide conspiracy that involved mobsters, psychic, strip-club owners, drug traffickers and a family of Mormons who falsely claimed to have won more than $24 million in cash and prizes.” The internet has dubbed this crime a McScam and it gets more interesting the more you look into it.

It seems to everyone involved that the movie will fair well as long as it has the McDonald’s name on it. There have been many other movies about McDonald’s including Super Size Me(2004), The Founder(2016), to the more obscure stuff like Mac and Me(where Eric is forced to take the alien, whom he has now named MAC “Mysterious Alien Creature”, to a birthday party at the McDonald’s) and a series of video games including M.C. Kids(1992) and McDonald’s Treasure land Adventure(1993).

Admittedly after seeing the movie The Founder I am in for anything that has to do with showcasing how McDonald’s was scammed out of money. You should watch it if you haven’t that guy Ray Croc was a total.. not nice person. The movie should be very well done and the fact that Affleck and Damon have hands in this makes me very hopeful for an intense crime docudrama.

What do you think about the prospect of this new movie? Tell Nerdbot in the comments and get the conversation rolling!

NES Classic is the Best Selling Console of June 2018