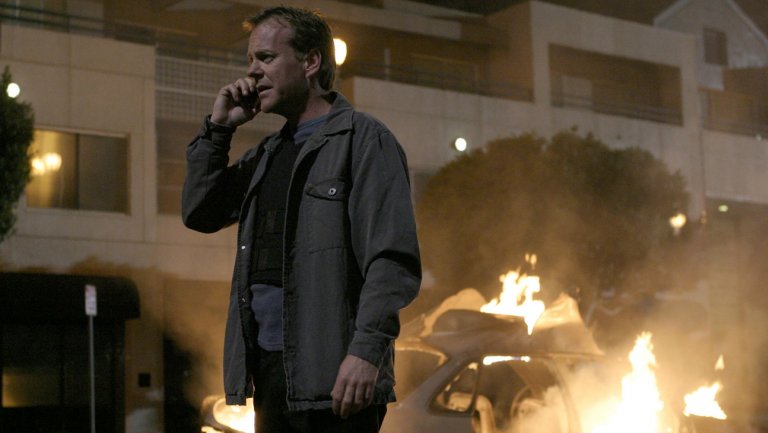 By Loryn StoneJuly 31, 20182 Mins Read
Share
Facebook Twitter Pinterest Reddit WhatsApp Email
Original creators Joel Surnow and Bob Cochran are teaming to pen the script for what sources say may be a new ongoing series. Jack Bauer’s next chapter may be an early one.
Per The Hollywood Reporter, sources state that the next installment in the 24 franchise will be an ongoing prequel series that tells the origin story of how Jack Bauer became Jack Bauer. Original series creators Joel Surnow and Bob Cochran are said to be teaming on an idea for the character originally played by Kiefer Sutherland. Executive producer Howard Gordon is attached to the project and is working with Surnow and Cochran on the idea.Surnow and Cochran are co-writing the script for what sources say could be an ongoing series rather than a closed-ended limited series like the most recent incarnations in the franchise, 24: Legacy and 24: Live Another Day. It’s unclear when the series could be on the air, though there had been rumors in May that Fox could launch the new installment for midseason. Casting has not begun.A valuable franchise for Fox, 24 initially ran for eight seasons before being revived with original star Kiefer Sutherland for the event series 24: Live Another Day. Legacy followed that, but it was built around Hawkins (Straight Outta Compton, The Walking Dead) and told a new story. Sutherland did not return but was credited as an executive producer. For his part, Sutherland’s ABC drama Designated Survivor was canceled after two seasons and is near a deal for a third at Netflix. Sources told THR last year that Gordon flew back to the U.S. in April and early May in an effort to revive 24, with talks said to have included a pitch to save Legacy.

A 24 prequel would certainly be a welcome title for “New Fox.” Following the Disney deal, the broadcast network is focusing on broad-skewing procedurals and multicamera comedies. An ongoing 24 with a new Jack Bauer would give it a recognizable franchise at a time when the network needs it the most.

Were you a fan of 24? Are you craving more Jack Bauer, or is this another pointless reboot? Give Nerdbot your thoughts in the comments and get the conversation going!