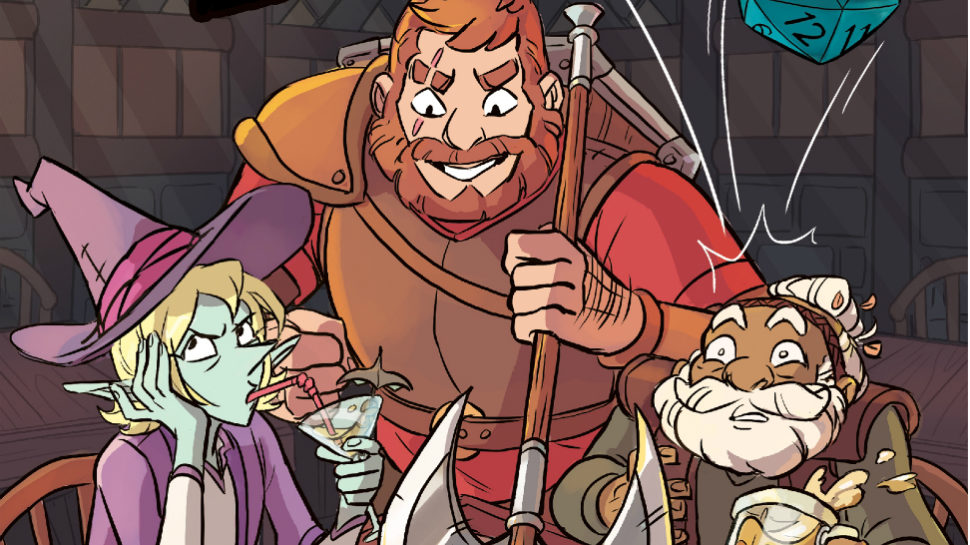 Dungeons and Dragons is a game where friends sit around the table and play a mostly audio, imagination-fueled, game that has no winners. The only competition comes from trying to do the most creative, funny, badass thing you can through roleplaying an entirely fictional character of your own creation. To put that into a podcast format and make it something so beloved that you sell out entire theaters just so people can watch you do that is something of a rare gift. The McElroy brothers and their dad (loving called daddy by three grown-ass men) have made a living out of it. Now, they have decided to take The Adventure Zone, a D&D podcast that is entirely an audio experience filled with purposely vague character descriptions to let the audience make their own imagination a part of the story, and make it into a graphic novel that relies almost entirely on visuals set on paper.

That was the most roundabout way of saying that The Adventure Zone: Here There Be Gerblins graphic novel is out and absolutely nails this ridiculous endeavor.

For those not in the know, The Adventure Zone is run by three brothers, Justin, Travis, and Griffin McElroy and their dad Clint McElroy. They have somehow created something that is not only one of the funniest shows out there, but still has an emotional impact that sneaks up on you as you recover from laughing so hard the people next to you on the freeway quickly move away from your lane, thinking they are the next target of your maniacal agenda. And remember, this is all within the confines of maybe one of the geekiest things you can do. (I say that needing to finish this article so that I can get back to setting up the next session for my own players).

The magic of bringing this to the paneled page is the same thing that makes it extremely difficult: visualization. It’s more than just describing the environment, it’s having action play out visually that allows the story to progress, while still capturing the fourth wall breaking antics of its creators. For this adventure…hey I said the word that’s in the title of their show!…the McElroys worked with the talented Carey Pietsch to convey the perfect blend of comic hijinks and visual emotion. Where her illustrations shine the most are in the characters reactions. The wizard Taako, Justin’s character, has never seemed sassier than being able to actually see his face implode on itself when things don’t go his way.

This brings a whole new layer to the comedy that gets worked into the already hilarious dialogue. So many panels are just the characters reacting to a situation, or someone else’s answer, and it needs no dialogue to make it funny. The visual format and condensed narrative also make it difficult for proper representation of Griffin McElroy, the Dungeon Master. The person enforcing the rules and guiding the story is automatically worked in without any need to have a visual representation of that person.

I had the privilege of making it to the live reading of the novel in Cincinnati and most of their discussion of adapting the podcast revolved around what the hell to do with Griffin. One idea was to make him an orb that just went along with the group, almost a part of the world. Another, and personal favorite, was to make every extra character have Griffin’s looks and traits, considering that he was the voice work and creator of every single aspect that wasn’t the three other players. I still think a Bugbear with glasses and hoodie over a green collared shirt would have made for humor all its own.

Ultimately, I think they did what was best and what worked in the podcast itself; break the fourth wall. The characters are just as startled by this narrative figurehead appearing before them as they should be, realizing that this otherworldly presence will be with them every step of the way. Griffin, the character, now can interact with the world and bring in the D&D feel to a comic that would otherwise just be a fantasy story. This graphic novel also has the challenge any long format story has when being placed into something smaller, things just need to get edited. You can’t have every song J.R.R. Tolkien decided to include about roads in the Lord of the Rings movies, and here you can’t have every dad joke that Clint makes in the story either. (Nor can you have every moment he fumbles around looking for the correct dice either, much to my own disappointment).

It’s weird because the usual phrase is “the book was better.” Things get cut from movies because there is no other way to have it. Sometimes those are your favorite things. So it will be similar here, just a warning Adventure Zone fans. Now it’s something cut down for a book. Then you realize that the Here There Be Gerblins arc, plus the bit of Moonlighting used, sits around nine hours of content. That’s a lot of material to condense.

I vividly remember having to pull my car over because I was laughing so hard at Clint’s character Merle arguing about wolves jumping up his ass. That conversation is partially in there, but not like it is in the podcast. That’s just necessity. It’s a double edge sword; when you are as funny as the McElroys you will inevitably have multiple things that are favorites, some get cut, but luckily there’s so much goodness in that podcast that some makes it too.

It’s not easy making this audio format entertainment work in a visual narrative, but the McElroys and Carey Pietsch did it with style. What gets left out (and some changes because of licensing with Wizards of the Coast) is ultimately made up for with fantastic art and a story that hits on the essence of what makes The Adventure Zone great. It’s comedy, and it’s excellent storytelling rolled into one.

This is only the beginning, the podcast itself is broken up into different arcs that flesh out what is a surprisingly compelling narrative leading for plenty more graphic novels in the future. The breadcrumbs are set even better this time around because in the podcast version of Here There Be Gerblins the McElroys were still figuring things out. The comic has the advantage of knowing where the story will go and setting those things up earlier, establishing character traits sooner, and lending itself to even better storytelling.

This stands on its own as a super entertaining graphic novel but really is a must-have for Adventure Zone fans. Go get yourself a copy and enjoy the work of these good good boys (and the amazing Carey Pietsch).

Chris is a writer, co-host of The Brothers Geek podcast, and wanna-be Hobbit. He loves examining the storytelling elements of movies and video games while drinking the darkest stout he can find. He especially loves Star Wars, Lord of the Rings, and anything made for the N64.
He also has more MRxL than you, just accept it.

That Fortnite TV series everyone is talking about? Not happening.