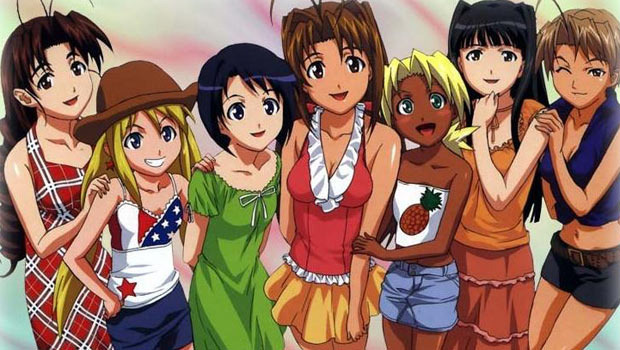 Pop Culture Infiltration: “Everyone Wants to Do Me” Anime

Welcome to Pop Culture Infiltration, where we zero in on a particular pop culture aspect and expose it for the repetitive nonsense it is. Today, our conversation leads us to anime. But this time, we’re heading back to the past. The not-too-distant past.

Now, I consider myself an Oldtaku (think about it, it’ll click) and my interest in anime peaked with late-90s shows. And back then, there was a certain genre that I just kept seeing over and over again. I call it “Everyone Wants to Do Me” anime.

There are a few variations within the genre, but typically, the shows function the same. Boy character finds himself surrounded by (or living with) multiple girl characters and they all want to fuck him. Hilarity ensues. Everyone and no one goes home happy.

The first of these shows I remember seeing was Ranma ½, although at the time I didn’t categorize it in the genre. You had a boy, a martial artist named Ranma and his dad who were living with Dad’s friend and his three daughters. Ranma was engaged to Akane, the youngest girl, and the two functioned as though they couldn’t stand each other so that when the few tender moments arose, the audience would get all squirmy-pants and giddy. Meanwhile, a slew of characters who wanted to bone either Ranma or Akane cycled through the show, thus creating conflict and comedy. The show doesn’t fit neatly into the genre, but aspects are there, and it had a great hook.

I think the very first one that made me stop in my tracks and say “Wait, this is a thing, isn’t it?” was Tenchi. Tenchi Muyo, Tenchi Universe, Tenchi in Tokyo, Tenchi Ryo-oki, Tenchi on Ice, Raspberry Tenchi, Lady Tenchi, Tartar Control Tenchi…seriously, I’ve never had a show whose timeline or iterations confused me more. But each one had one thing in common. Everyone wanted to pork Tenchi.

Now Tenchi had one distinct character trait that in my opinion, carries through the genre/trope/whatever you want to call it. He’s a wiener- a bunch of beautiful girls are vying for his attention and no one can quite figure out why. But that’s likely part of the comedy- that’s he’s an every-boy, maybe a reflection of a typical Japanese boy at the time, and this cast of extraordinary women all want to have sex with him.And then something-something Jurai/light saber/space pirates?

Shortly thereafter, I remember seeing the original Ah! My Goddess OAV (I want to say there was somewhere around four episodes, but my oldtaku memory might be failing). It was again, a show about a typical young man who meets a demure, sweet goddess named Belldandy. Soon enough, her two sisters show up, the sultry Urd and the snappy little Skuld. They all live with our clueless male protagonist while we, the viewer, hope that he and Belldandy find love without the meddling insanity of her two sisters. That’s all that anime gets from me because truthfully, it’s not especially memorable. Other OAV specials and a television series came thereafter, but the original early-90s animated videos were the extent of what I saw and only prove my point and make this article better.

The series takes place in a world inhabited by males. A set of male astronauts found a new territory/world but because there were no women present, they all just cloned themselves. Later, female robots were created for company, etc. but they were still just robots. Eventually, a special sort of robot was created with a Maiden Circuit, which makes said robot more human. Enter Lime (spunky), Cherry (demure), and Bloodberry (sexy) and they all live with a lazy, cocky weirdo named Otaru.

In this case, it makes sense that all the girly robots want to tap that, because he’s not awkward. He’s just effortlessly cool as hell, but not in a shonen sex-boi kind of way. Otaru is a real person. The fun twist in the show is that another male named Hanagata wants to get in on that Otaru-loving action too, so it makes for a really fun/dysfunctional kind of show.

It seemed like this kind of series was held at bay for a minute until Love Hina showed up. By then, I was personally just done with this genre. I was over it. I’d seen enough and didn’t want to see anymore. In Love Hina, a boy who didn’t make it into university moves into a dorm near his school of choice and suddenly has a bunch of female roommates. The show’s popularity exploded, but I don’t think I saw more than six episodes or so. It was just trite and tired, and I couldn’t watch another wiener boy with ladies hanging all over him. Especially in a boring slice-of-life setting.

I’ll always find it fascinating what happens when the script is flipped on this genre, and it got me thinking about Fushigi Yuugi from the mid-90s. The show was about a girl named Miaka (age 15) who gets sucked into another world (ala Escaflowne and Magic Knight Rayearth) only to be told she’s the Priestess of Suzaku with a group of Star-Warriors she must collect into a singular group. In typical form, they’re all male soldiers, 6 out of 7 are gorgeous, and 4 out of 7 would totally play air-guitar on her ass if she let them. But whereas in the male-protagonist versions of these show where all the girls wanting to wreck a dorkus is played up for laughs, in Fushigi Yuugi, Miaka figuring out which of these guys should hold her heart and body is played in a serious fashion. And truthfully, the show just doesn’t age well. When I saw it at age 14/15, it was some of the most romantic junk in the world. Now as a jaded grown-up with the series on cheap Hong Kong Bootleg, it’s just laughable. I’ll always remember fondly how invested I was in these characters and how important everything seemed, but the pacing now is just a joke. Plus, the amount of “near rapes” is sickening, but that’s another conversation. I guess you could say the male characters in their own “Everyone Wants To Do Me” narratives come close to assaults, but because society doesn’t take male rape seriously, it’s once more, played up for laughs. So, just give me more magical girls and robots. At least those make sense.

Do you have a favorite “Everyone Wants Me” anime? Did we leave some out? Tell Nerdbot about it in the comments and let’s get the conversation going!

Follow Loryn on Twitter. She also has a personal blog. Her debut novel My Starlight, a young adult novel about anime, cosplaying, fandom, love, loss, and friendship will be released August 3rd, 2018 by Affinity Rainbow Publications.