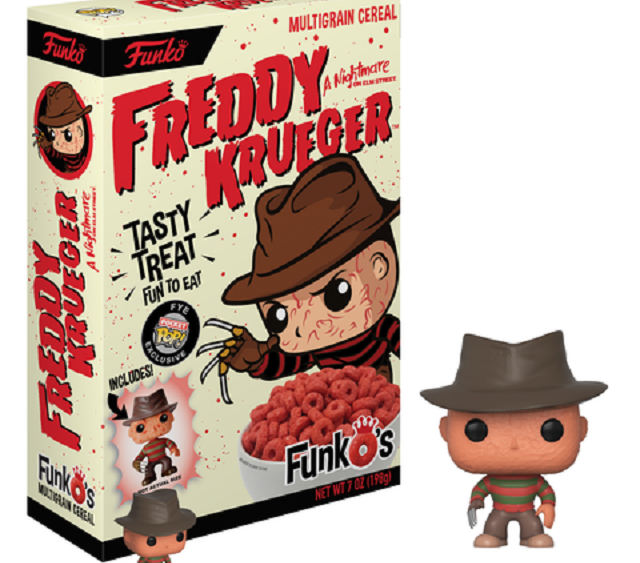 The 80s are Back: Megaman, Freddy and Jason Get Breakfast Cereals

Pop culture toy company Funko is releasing a line of breakfast cereals to help you celebrate the most important meal of the day with a healthy dose of nostalgia.

According to Variety, the toy giants are putting out its own cereal line this summer featuring characters from its Pop! Vinyl figure collection. Characters like Mega Man, Cuphead, Gollum, Jason Voorhees, and Freddy Krueger are now edible crunchies you can scoop into your mouth. Hopefully the spoons don’t come with knives, shears, and spikes on them.

“Funko, purveyors of pop culture and all things awesome, is committed to helping you start the day off right by putting the fun back in breakfast with FunkO’s,” the company said in a blog post on Monday. “And as we all know from Saturday morning commercials; every breakfast starts with a bowl of brightly colored cereal that comes out of a box with a really cool mascot on the front and a prize inside!”

Each box contains fruity O-shaped cereal, and hopefully still taste like the 1980s. They also come with a collectible figure, so make sure your hands are good and grubby because we’re deep-sea cereal diving just like the good old days. Starting in July, the Mega Man FunkO’s will be available at GameStop, while the Cuphead and Mugman boxes will be at Hot Topic. You can get the Freddy Krueger and Jason FunkO’s at FYE and the Gollum FunkO’s at BoxLunch. Finally, Freddy FunkO’s will be available through Funko itself.

The toy company said it plans to add additional cereals throughout the year.

What character do you want to see on a breakfast cereal? What do you want them to taste like? Let’s get the conversation going in the comments below!