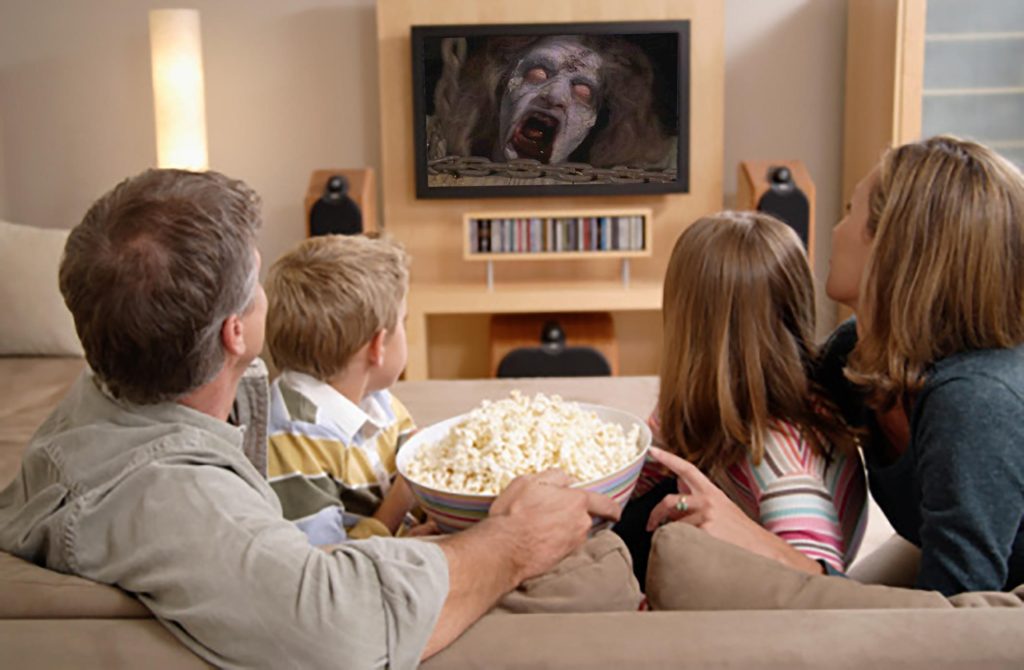 How To Get Your Kids Into Horror

So, you’ve decided to warp your child through the magic of horror movies? Congrats! You are carrying a proud tradition of making sure children grow up to be way cooler than all those other boring kids who are only into…oh I don’t know, Twitch stars or something. But now you probably face a conundrum many die hard horror fans run into…where and how do you introduce your child without them rejecting it? Your child needs to recognize the fun in the mayhem and appreciate the darker side of humanity in an accessible way. To that end, we have decided to present several ways to best guide your child into a life of black clothes and hockey masks.

People might be initially put off on the idea of showing kids scary movies when they are young, but that’s only out of willful ignorance. The truth is that seemingly harmless material is meant to freak kids out and remind them that the world sucks. Disney movies are full of stuff that would give any average three-year-old a healthy case of PTSD. Hell, the animated movies have built their legacy on patricide and monsters coming out to threaten the heroes. Other cartoons like Richard Williams’ Raggedy Ann and Andy are pure nightmare fuel, designed to sear themselves onto kids brains like a LSD laced cattle prod. There is nothing quite as terrifying at that goddamn candy monster blob thing and it can be an easy gateway into giving your child nightmares, tenderizing their innocence into something moldable like so much Playdoh. The list goes on and on so it’s easy to get creative and make any piece of children’s entertainment into a horror movie. Ferngully? Sure! Oliver and Company? Absolutely. This way is the easiest since you can draw from your own youth and pass your neuroses onto them!

Approach #2 Exploiting the Flexibility of the PG Rating

In the age of increased ratings awareness that tell you everything objectionable in a movie, it can be easy to forget how much of a wild west movies from the 80s were. Gore used to be fine family entertainment as long as an adult was vaguely present. Anything in the Steven Spielberg charnel house was as innocent as apple pie, from Gremlins to the face melting goodness of Raiders of the Lost Ark. A great “my first horror movie” is One Dark Night from 1982. It’s got everything…zombies, face melting, awful special effects, Adam West, all in a PG package. It is also dull as hell with plenty of dead air making it easy to MST3k the boring parts. But when the bodies start to pile up you can be sure that your kids are losing their trust in the world in a safe digestible way. 1989’s The Witches is another example of a family movie gone horribly, horribly wrong. Knowing that executives watched that movie and went “yup! Put it in the kids section” shows that the world in on your side in making your kid a weirdo.

So, maybe you already have a kid that has a little more taste than the average idiot toddler. One that can handle movies in black and white or don’t have a superhero in them. Not only is your child already awesome but it means you can get them into movies that are getting largely forgotten by the present. Night of the Living Dead works perfectly in that regard since it is quaint in comparison to The Walking Dead but it still has a punch that can send a child reeling if they watch it at the right time. If that feels a bit extreme, and it very well might be, then the Universal horror movies of the 30s still have an eerie power even to this day. The fact that they have faded away from pop culture ubiquity gives them a newfound power since they aren’t being used in Halloween commercials the way they were in the past. If your young one doesn’t know what Psycho is really about then you have a chance to give them an experience you personally never got a chance to have. They can be genuinely shocked over what happens in the shower at the bates motel, which can be a nexus point for the power of editing and tension. Making your child a bon vivant of classic horror may seem pretentious but I can guarantee their suit/dress game will be on point.

Approach #4 The Posters on the Wall (or the Osmosis Theory) 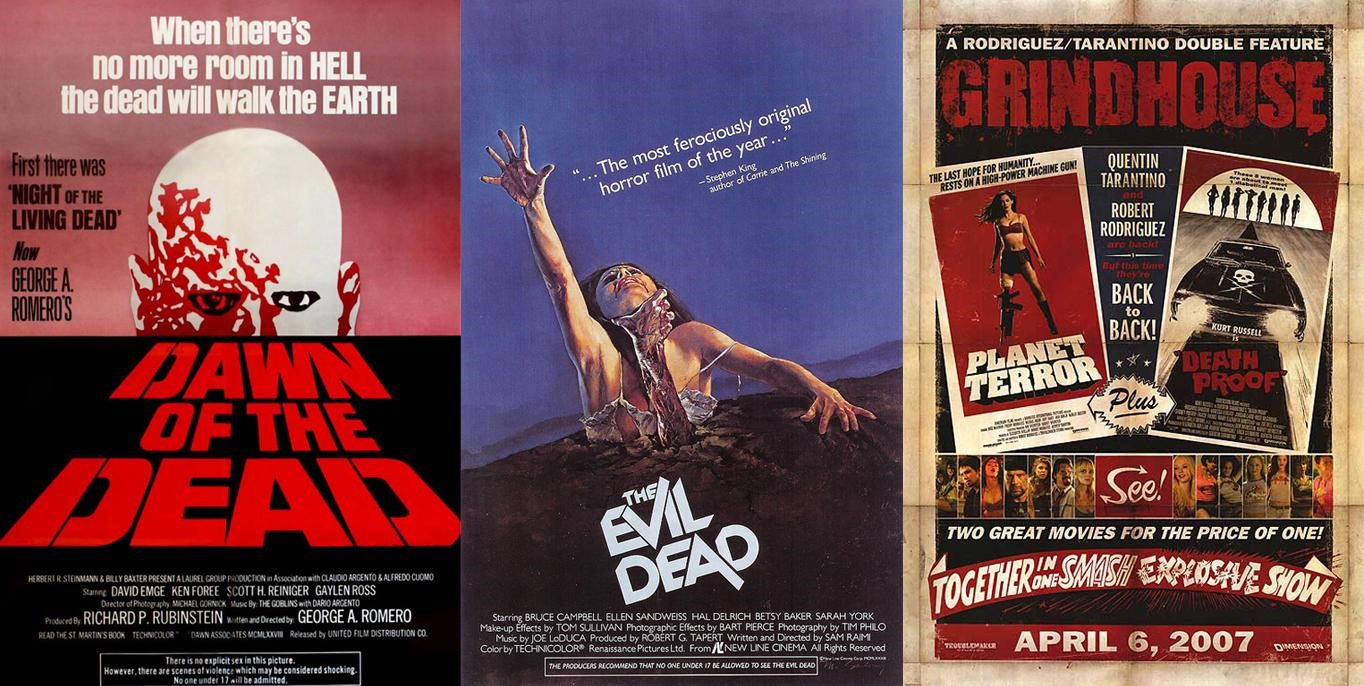 Kids can be picky. Despite your best efforts, they may not be willing to sit down and watch anything they have not been exposed to a million times on YouTube. That’s when you have to become a little more indirect to your approach. Kids now don’t have the ability to peruse the shelves of a video store and see all the covers of the movies they couldn’t see. Imaginations would run wild seeing Pinhead glowering at you and you could only guess at what kind of terrors could be contained in those tapes. It did not matter that for many movies, the cover was the best part, it was the guessing that held the power. That’s where movie posters and other memorabilia come in handy. Nothing ties a room together quite like an Evil Dead poster hanging in the hallway, gently reminding your children that evil is real. When they ask what that movie is about you can be in control over how to respond. “Oh that movie? I don’t think you would want to see THAT movie” is a call to action as powerful as anything because it makes you a challenge to be conquered for the right kid.

That’s when you conveniently leave your Netflix queue set to your account for them to stumble upon. And wouldn’t you know it that movie that has a poster hanging up is right there for the viewing…waiting. What your kid does next will be what decides what kind of relationship you have with your child and whether you can go arm in arm to go hang with Bruce Campbell and Kane Hodder.

(WARNING: This one can go horribly wrong really easily. Don’t say we didn’t warn you!)

Sometimes you just have to take a blood drenched hammer to your child’s innocence. Now, I am not saying you go Ludovico and pry your kid’s eyes open while playing Audition. But if you are watching Aliens and they happen to walk in when the Queen tears Bishop in half well then that’s kinda their fault now isn’t it? Or watching Suspiria on your laptop right when they come home from school just in time for them to catch the girl’s heart getting stabbed in extreme close up. You can’t just play a movie, they have to see just enough that it invades their thoughts like a virus as they process what they hell you just showed them.

You have to be extremely skilled to pull this off or just y’know watching the garbage you’re usually watching. This strategy is mostly dependent on your ability to be the right kind of neglectful. Fully attentive to their needs while not letting that get in the way for your jonesing to watch Nightmare on Elm Street 3: The Dream Warriors again. Let them watch their Minions or Boss Baby (which is scary in its own way) and lay the trap as they stumble upon the way wrong thing. Then just let time and trauma do its thing and see what they ask to be for Halloween. Do they wanna be a Jedi or some kind of Marvel hero? Then you done fucked up. But do they wanna be Pennywise the Clown, complete with the razorblade teeth? If so then congrats, you have accomplished your responsibility as both a parent and a member of society.

As a parent you really have to know your child to figure out which direction is the best one. Hopefully if your twisted enough then the child already has the seed for the subversive in their adorably rotten hearts. Your future Wednesday or Pugsley Addams just needs the right push before peers and other authority figures push their little boring lives onto them making them a pastel square. Let us really be honest, your kid’s little friends suck and they will drain everything interesting about your own child as they try to be more like them. You must resist this at all costs if you hope to go arm in arm to Monsterpalooza as a family. Your fellow fans will salute you, your child will respect you and their therapist will certainly appreciate the business.