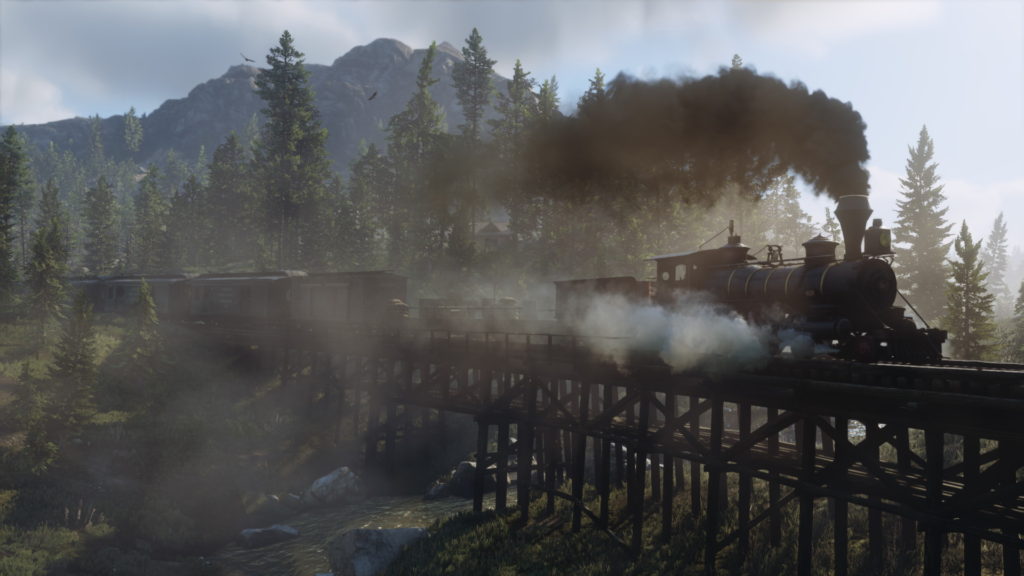 It’s a new year with all the hope, determination, and resolutions that come with entering the year of the doggo. What will this year bring? World peace? The cure for the common cold? Finally a way to decide what to have for dinner? That would be all well and good, but I just want good video games.

Specifically, I would love to have some amazing single player, story immersive, character forward RPG experiences. Because of all my new year’s resolutions, the most important is sinking ungodly amounts of time into a fictional universe that does nothing but distract me from things I actually need to be doing. If I’m going to ruin my life, the games that do it better be good!

So here’s my RPG wish list for 2018 that needs to be given to video game Santa Claus immediately. (Who hopefully delivers more than one day of the year.)

Bethesda: Something Not Skyrim

Fun fact: Bethesda does more than just make Skyrim. I almost forgot that! Now, don’t get me wrong, I talked about sinking hours into a fictional universe, and the frozen paths of Skyrim take the cake (or sweet roll) in that category. My dad has played so much that my brother and I simply call him “the Dadonborn.”

It’s time to move on, however. Skyrim came out at the end of 2011; the world had yet to even come to its 2012 apocalyptic end at that point! We keep getting updates, new ports over to things like the Switch, and mod tools. On the one hand, the mods allowed for constant freshness, on the other, let’s have another Elder Scrolls, please.

Yes, we got Elder Scrolls Online in that time, but it’s not the same as diving into a world that feels alive and affected by the actions you take as a player. That’s always been my main problem with MMOs; the world feels unchanged. Give me a world I can mold. If I am some great hero, let it seem like the world reflects that. If I steal every cheese wheel, I better feel like those actually left the world and can only be found occupying every flat surface in my virtual house!

The point is, I like what Bethesda does with their single player worlds. I want to see a new story, new mechanics, and updated graphics, let’s do this thing! There’s plenty of free market research at their disposal too. All Bethesda needs to look at is which mods were the most popular (besides the boobie mods, of course) and you got yourself your new gameplay features.

I swear, if they announce the next thing for Skyrim at this year’s E3, and then just walk away, I might just scream…then jump back into Skyrim.

Here’s another game tentatively coming in 2018. One of my favorite games of all time is Red Dead Redemption, so it’s only natural that I look forward to more pistol whipping, mountain lion chasing action. Well, the mountain lions were doing most of the chasing.

That being said, it was the powerful characters that made the game for me. It’s one of my favorite westerns of all time, let alone game. The way the story unfolds, combining with that beautiful, yet stark western landscape makes for some of the most memorable gaming moments ever. The ending genuinely surprised me, and I rarely get so caught up emotionally in a game story.

So when I hear that Rockstar wants to focus on multiplayer, I get worried. I get that GTA Online was a cash cow for Rockstar, and they want to find a way to keep that going, but I hope this doesn’t mean that the single player story will be the sacrificial lamb.

There’s been a lot of concern for this direction from all developers. We see loot crates appearing in single player stories, DLC containing major plot points, and producers looking for ways to make a full game cost more than $60 in the form of post-release content.

Red Dead Redemption 2 could be the best example of a single player story still making headlines in a gaming world that focuses more on multiplayer, or it could be another franchise sinking into the sea because of it.

Breath of the Wild Masks (Owned By Majora)

Yes, yes, I know it’s early for a Breath of the Wild sequel. I know it takes years and years to properly develop a game, but just hear me out. Go the Majora’s Mask route. Use the same graphics engine, models, mechanics, the same Link even, with a brand new story.

You can say nay all you want, but Majora’s Mask is one of the most highly acclaimed Zelda games of all time. It’s haunting, memorable, and makes a real statement for something fresh in the franchise. Of course I want that again!

I would love to see more story focus too. Breath of the Wild is my favorite game from 2017, one of my favorite Zelda games of all time, but the amount of open world freedom took away from more story. There were moments of it, and my favorite thing was hunting down the memories to unlock, so expanding upon that, even at the expense of a larger game map, would be most welcome. The more characterization, the more connected I feel to the actions I’m taking.

Speaking of, this would be the perfect opportunity to break away from Ganon again. Like Majora’s Mask or Skyward Sword, I would love to see different antagonist with different strengths, weaknesses, and motivations. Cut back, perhaps, on the weird tongue, but other than that, get crazy with it.

The Redemption of Bioware

Let’s go from my favorite game of the year to my most disappointing. When Andromeda came out, I spent my actual money on it. I say this because I spent very little on games last year (because I had very little), so spending time and money on a game meant a lot last year.

I played, and it was…fine.

Just fine doesn’t cut it when it comes to Bioware. I want to be completely and utterly immersed in the character I make. I felt like there wasn’t a lot of choices to make in Andromeda, and, yes, some gameplay was very fun, ultimately I didn’t connect with any of the characters.

That was so weird from a Bioware game. Usually, the holes in the plot and worn out tropes are more than made up for with the characters that make up your posse. I can’t even tell you the name of one of the characters without cheating and looking it up. And I ain’t no cheater, (unless I have one last balloon in Mario Kart 64…I will unapologetically screen-watch, that’s all there is to it.)

No more Mass Effect please, leave it be. I know we are getting Anthem supposedly this year, but that’s a very multiplayer experience. So, Dragon Age 4, where you at? Let’s hear an announcement, with a short wait time. It’s been a long enough time to get some real info on this, and the possibilities are endless.

Oh, and this should be the last. Take everything we have loved from this series and put it on the line. Focus on making unique origins for the main character and let me really have a branching story ending. (Remember, I spend very little on video games, so replay value is everything!)

This wish list is mostly hopeful announcements this year. Well, we may actually get Elder Scrolls 6 by the end of the year. Bethesda is one of the few companies that announce, then release pretty close to that announcement.

Which brings me to my next wish! I don’t want something announced that won’t come out for another three years. How long has Kingdom Hearts 3 been coming soon?

Looking back at Andromeda, some of the problem for that game was announcing it, then waiting forever for it to actually come out. It was multiple years of waiting. The course of a game changes drastically in that amount of time, and the hype can rarely be matched. I don’t think I need to dive into No Man’s Sky to explain that.

Even great games like Dragon Age: Inquisition changed drastically from announcement to release. What originally was going to be a game focused on creating a very unique Inquisition as an institution, became blending a lot of those ideas into shallower versions of what was first shown. I remember wanting to make a super sneaky, intelligence from the shadows, kind of Inquisition when I first heard about the gameplay mechanics. There were ways of doing that in the final game from the war room, but it wasn’t major changes that affected how your Inquisition functioned.

Instead of years of hype, where the downside is more disappointment the longer the wait is, try instead just releasing a game within a year of its announcement. Sounds simple. This is especially true of long-standing and loved franchises. The marketing is already done for you with previous installments. All you need to do, as a developer, is say, “Hey the next Mass Effect is coming out, here’s a trailer, its out later this year.” People will buy the game, don’t worry. Developers don’t need to have the hype train leave the station in 2014 for a game coming out this year.

Oh, this isn’t something I hope for from a developer. I just want more time. Stupid job, you get in the way! There’s just not enough time for all the games that come out each year!

And, if all of this falls through, can I get a new Rogue Squadron, please?

*pours some drink out for LucasArts.

The video game industry is too big to fit all the wishes in one article, so what’s your video game wish list for 2018? Let us know in the comments below!