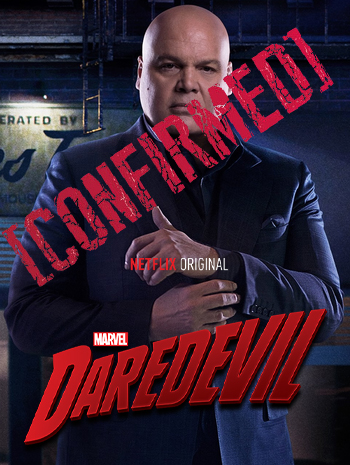 The King Is Back in Daredevil

Wilson Fisk, many say he’s the best villain in the whole Netflix Marvel series. They may be right he was ruthless and a monster. That’s what made him and season one of Daredevil so great. It was an adult themed show portraying street level criminals and gangs wreaking havoc throughout New York city. It grounded the whole MCU on displaying the aftermath of the first Avengers.

Now after marvel’s latest show the Defenders, it’s unclear on where they will be going. In regards with the next big villain. They have made a few announcements on what to expect in the upcoming seasons such as Luke and Danny teaming up as “Heroes for Hire” in Luke Cage season 2, KillGrave returning in Jessica Jones, and obviously a third season for Daredevil. But even though it looks like a fresh start it doesn’t hurt to see that it was confirmed that Vincent D’Onofrio aka Wilson Fisk will be reprising his whole in season 3 of Daredevil!

We didn’t see him at all in the Defenders, which bummed out a few people. But we did see him in season two of Daredevil, and what little time he had was sure to send shivers down your spin. The last we saw of him he was making deals with Frank Castle (The Punisher) but most importantly he was vowing to destroy Matthew Murdock and everyone he loves. That was the part that seemed to get everyone excited again because it was a brief reminder of how much of a monster this man can be when he’s enraged.

It’s unclear when season 3 will come out or what it will even be about. Although it has been teased based off of the ending of the defenders, and what Fisk told him. Basically people are predicting that it will be another Frank Miller story where Fisk goes out of his way to make his life a living hell, to a point where Murdock questions his own sanity. It’s one of Daredevil’s most popular stories and one of the ones that brought him back into the limelight.

Marvel hasn’t made any comments regarding the plot of season 3. But it’s still enough to get people excited to see these two to go at it again toe to toe.

What would you like to see in this Series? Let Nerdbot know in the comments!