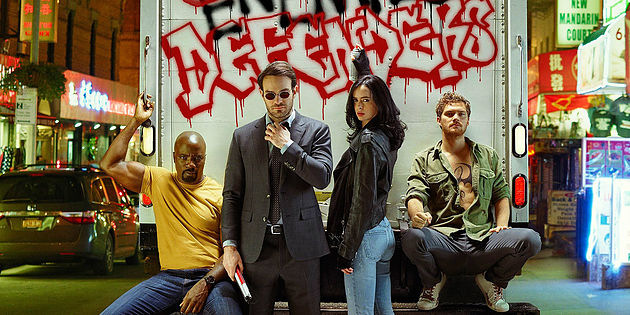 We are finally here, after five seasons of standalones, with the small screen Avengers in their terribly gritty, definitely more realistic world. The good news is that, for the most part, they keep things entertaining, finding a good balance between the more realistic world they’ve been creating on the small green, and some of the unavoidably fantastical elements of the story.

One of the most charming elements of the whole show is the uneasy friendships that exist between the group, particularly Cage and Rand who come from very different backgrounds. Following Jessica Jones’ lead in dealing with important subjects with a refreshing level of frankness, the third episode very open has Cage calling Rand out on his white privilege.

This particular thread is an interesting one for a couple reasons, partly because of the current political climate in America, but mostly because of the heavy criticism that Iron Fist received for this exact issue. In spite of exec-producer Marco Ramirez’ insistence that this wasn’t a reaction to the Iron Fist reviews, it’s impossible not to see the connections.

The official word on Danny’s repeated roastings though is that they existed in the script before Iron Fist even aired, and that begs the question whether the “issues” that many called out with Iron Fist were actually to some degree intentional and just a part of building the character of Danny in a universe where white privilege is a real thing. In this show he comes across as the least mature of the group, with little real understanding of the world he’s living in; it’s certainly not implausible then that Iron Fist’s criticism was simply people misunderstanding the goal.

The theme of incredulity continues throughout the show as Cage and Jones struggle to accept the more cartoonish elements of the story, particularly powers born of a dragons molten heart, and Murdoch running around in full on superhero costumer. This is done with a near perfect level of humor however and turns the silliness into something to be enjoyed, which is exactly what it should be.

There are some missteps in the show, such as the use of hip-hop in a final episode fight sequence that is conspicuous by the absence of similar pieces of music from the rest of the show. Another notable example comes mid series, when Jessica Jones abandons the boys in a Chinese restaurant to not really do very much, before returning just in time for a big fight.

These can be forgiven though as they are more niggles that certainly don’t ruin the enjoyment of the show over all. Sigourney Weaver is excellent as always as star villain Alexandra, and the script even manages to pull out one or two ‘Well I definitely didn’t see THAT coming,’ moments that are all the more effective for their shock value.

The script also does a good job of tying together elements from all four characters’ stand-alone shows, so you never watch it feeling like one of them is there just because it’s The Defenders. There are also some nice little leads into potential future plot lines, with one of the supporting cast getting a VERY specific non-lethal injury late in the game. The chemistry between Cage and Jones does feel a little clunky though, with the two not really showing any particular interest in anything romantic until quiet moments where it is suddenly dished out with a ladle.

Overall it’s a good, solid watch though. There were never any moments where I felt bored and, if you’re feeling generous, you can almost forgive Iron Fist some of it’s faux pas when holding it against the wider context of The Defenders. If the show runners are able to learn from past mistakes, and keep this kind of quality going, then the Netflix run of the MCU could still have a lot of mileage left in it.

Did you love or hate Defenders on Netflix? Let us know in the comments below.