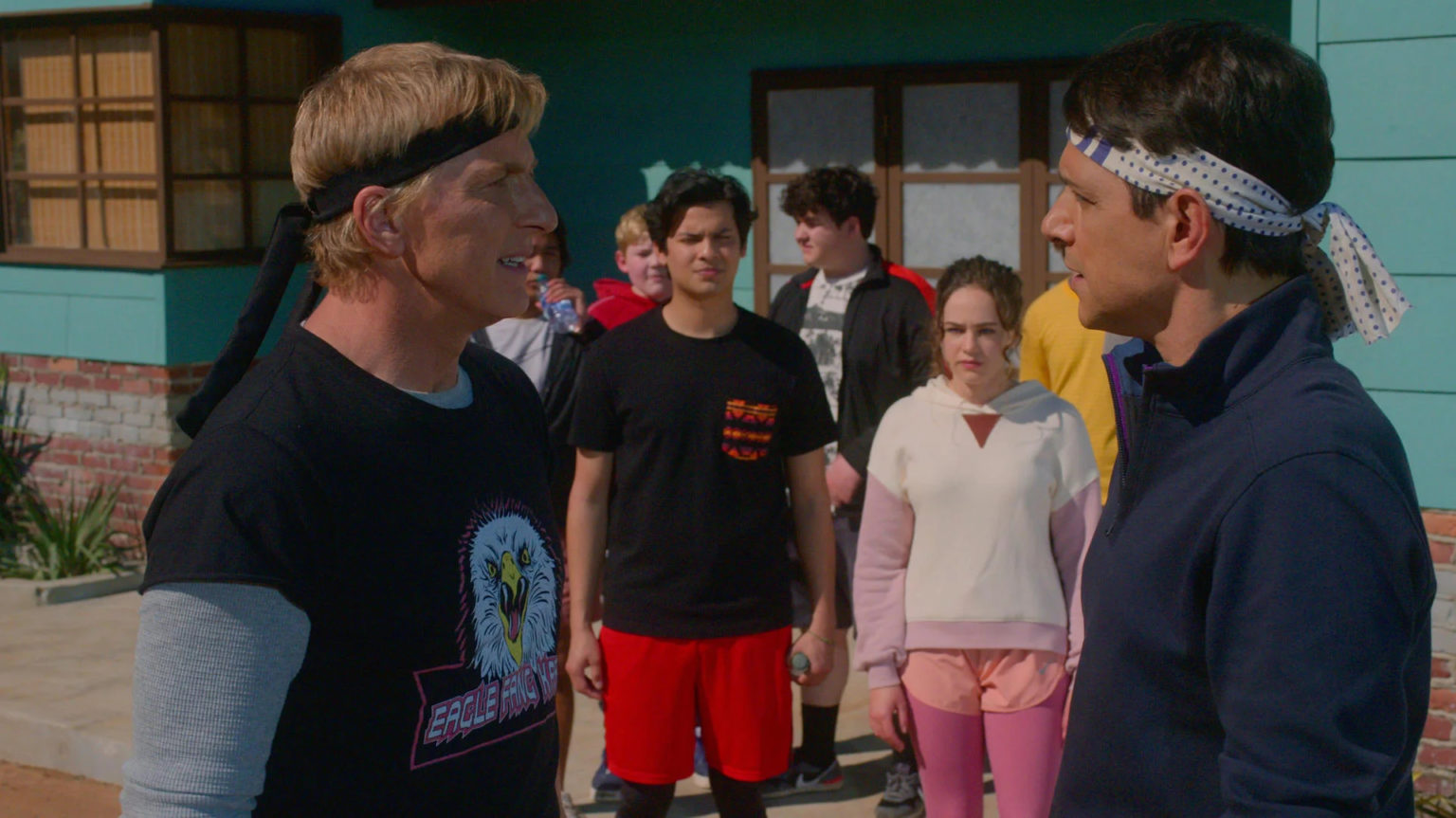 It’s pretty impressive that “Cobra Kai” is still alive and kicking after 5 seasons. From its humble beginnings on YouTube Red (yes, that was a real thing that existed long before the platform spammed you with YouTube Premium ads every 5 minutes on every YouTube Video) to its new life on Netflix, the series no one asked for has transformed itself into a bonafide phenomenon.

The question really is at this point, how much more nostalgia can be mined from an already simple and rather silly premise? How many damn fights are these children going to get into before we just thrown the whole valley away and send em all to prison? How interesting can this show continue to be? Well according to season 5, quite a bit more can be mined from its nostalgia filled premise, the kids will fight without consequences, and apparently “Cobra Kai” has no issue staying interesting.

“Cobra Kai” continues to lean heavily into the little niche it has created for itself, with season 5 managing to be a fully realized homage to its “Karate Kid III” source material while continuing to inject its silly nostalgia with a ton of heart and meaningful themes. It’s blend of these things continue to make this one of the most fun shows Netflix has to offer, and it’s self awareness mixed with its genuine and earnest love for the original film series continue to shine through and allow the thematic undertones to hit more than miss. The show is still cheesy as hell, and requires some suspension of disbelief to function. But the show runners and writers all seem to be acutely aware of what they’re doing and what “Cobra Kai” is suppose to be, which allows viewers to relish in the ridiculousness and enjoy the karate ride.

Season 5 is a bit of departure from its earlier seasons, in that it doesn’t have an All Valley tournament as a catalyst for all events. Instead, the new season takes a stab at consequences and family, as well as testing, strengthening and/or creating new and old relationships. Surprisingly, most of the teenage angst is relegated to subplots this time around to make room for mid life crisis angst, choosing to focus on Daniel and Johnny and their lives after their most recent tournament loss. Of course, adding Terry Silver to the mix elevates the torment and havoc that gets thrust upon the lives of our heroes, and Silver’s manipulation and master plan is more tailored toward our adult heroes with the students as pawns instead of the who’s who of dating love triangles. Ir doesn’t necessarily leave The CW high school drama in the dust, but as silly and cheesy as the show is, there seems to be an attempt at more grown up themes this time around.

Daniel (Ralph Macchio) is reeling from two things in season 5: the loss and closing of Myagi-Do and the arrival of master manipulator Silver, who exploits all of Daniel’s past trauma from “Karate Kid III” to create a self defeated, self sabotaging shell of a man. Johnny (William Zabka) is also reeling from the events of last season, but is working on trying to be a better person and better father to his son Robby (Tanner Buchanan) and semi-adopted, father figure son in Miguel (Xolo Mariduena). These challenges of course spill over into every aspect of everyone’s life, and the need to take Silver down is beyond just karate and drives home the need for healing and learning from your mistakes. “Cobra Kai” drives this healing home in a number of ways. Whether it’s reprioritizing your life to remember what matters, or taking some time for yourself to figure it all out, or realizing you’re in too deep and the choices you’ve made have ripple effects you didn’t realize, and of course hashing it out with your fists until you forget what the hell you’re mad about.

Everyone in the cast understands the assignment, and the budding BFF storyline between Johnny and Daniel feels organic and like the right trajectory for the tumultuous relationship. I didn’t think I wanted the buddy karate show of Daniel and Johnny, but “Cobra Kai” season 5 makes it all makes sense and feel like the right way to take the relationship between these two men. The real stand outs this time around though are Thomas Ian Griffin as Terry Silver and Yuji Okumoto as Chozen. We knew from the previous season(s) that both men would play larger roles in this season, and goddammit do they not disappoint. Griffin’s Silver is a relentless 80s villain, chewing through scenery with the swagger and devious plotting fit for a bond villain. Okumoto’s Chozen is charming and funny, delivering the much needed humor in some of the more dramatic storylines. His comedic timing and friendship with Daniel is a welcomed addition to an already stacked and sprawling cast, and he’s the perfect enemy turned loyal friend character to be added to this latest season.

I also have to give a shoutout to Courtney Henggeler as Amanda Rouso, who finally gets a little bit more to do and be a little bit more impactful in the outcomes of this season. We also get to see Henggeler explore her own character as the dutiful wife who’s pretty much had enough of her husband’s constant need to workout childhood trauma through karate all over the Valley. As a personal side note, I’m very glad Sam (Mary Mouser) takes somewhat of a back seat this season. I just don’t care for the character, and I find the episodes suffer when we focus on her for too long and too often. She’s very much relegated to the the background despite playing a pivotal role in the overall conclusion of the season, but she is just one of the least likable parts of the series for me.

Also, I’ll never get over the fact that Tyron Woodley shows up in “Cobra Kai,” a very cheesy, nostalgic fueled series about fake high school karate tournaments and STILL never throws a punch. The Chosen One, my ass.

If there are any misgivings about season 5, they predominantly show up in the season’s conclusion. The show feels like it’s all set up with no real definition for how to bring it all home. There are some truly great moments throughout this season, and some great characters and plot points that feel like they can go places but never really come together as cleanly as they are laid out and presented. The whole climax feels rushed and uninspiring, even somewhat unearned. Our heroes make some really bad decisions that never amount to much more than getting them to the right places at the right times so we can end the season with some big action set pieces. That would be fine if we didn’t spend 8 episodes watching all of heroes work their shit out and make smarter choices for the good of their families and own mental health. It all gets thrown out the window rather quickly, and everything escalates to a fever pitch almost immediately, only to find definitive resolutions just as fast.

The season finale feels more inconclusive than ever, as if “Cobra Kai” is unsure whether or not they’ll be able to come back, so everything needs a nice little bow on it just in case this is all we get. I know Netflix is notorious for making terrible renewal and cancellation decisions, and even something as watched and beloved as “Cobra Kai” could be shelved for, I dunno, more “Cocomelon” or forty “Gray Man” spinoffs no one actually wants. It’s not a bad conclusion, and remains in line with what we’ve come to expect from the series, but its conclusiveness actually takes away from the overall impact of the show. Everything up until the end is about consequences, family, healing and learning. And we spend episode after episode peeling back layers of heroes in hopes to put them together again, only for them to kind of come out of everything relatively unscathed and somewhat the same.

This is also due to “Cobra Kai” rewarding our heroes for bad decisions, a big departure from most of what had happened prior.

Overall though, the series is back and back with a vengeance. It may make some missteps in its final moments, but season 5 is proof that there’s no punches pulled for this terrific show and it continues to strike first and strike hard. It’s not as emotionally charged as previous seasons, and does feel like its ambition may be getting away from them slightly, but that has more to do with the lack of clarity of “Cobra Kai’s” future on the platform that it does with any fault of the show or its writing. If this is all we get, then it will be a glorious run for a surprisingly effective show. If there’s more, well season 5 solidifies that we’ll be there with Gis on.

“Cobra Kai” season 5 is another solid entry into an already strong series. It packs enough of everything you’ve come to love about the show, and while it may not be the strongest season so far, it still doesn’t miss its mark and strikes hard where it counts.

All that’s left is to renew the series for season 6 and bring on Hilary Swank. Yeah, I said it. It’s the only logical conclusion.

“Cobra Kai” season 5 is currently streaming on Netflix. You can watch the trailer below.