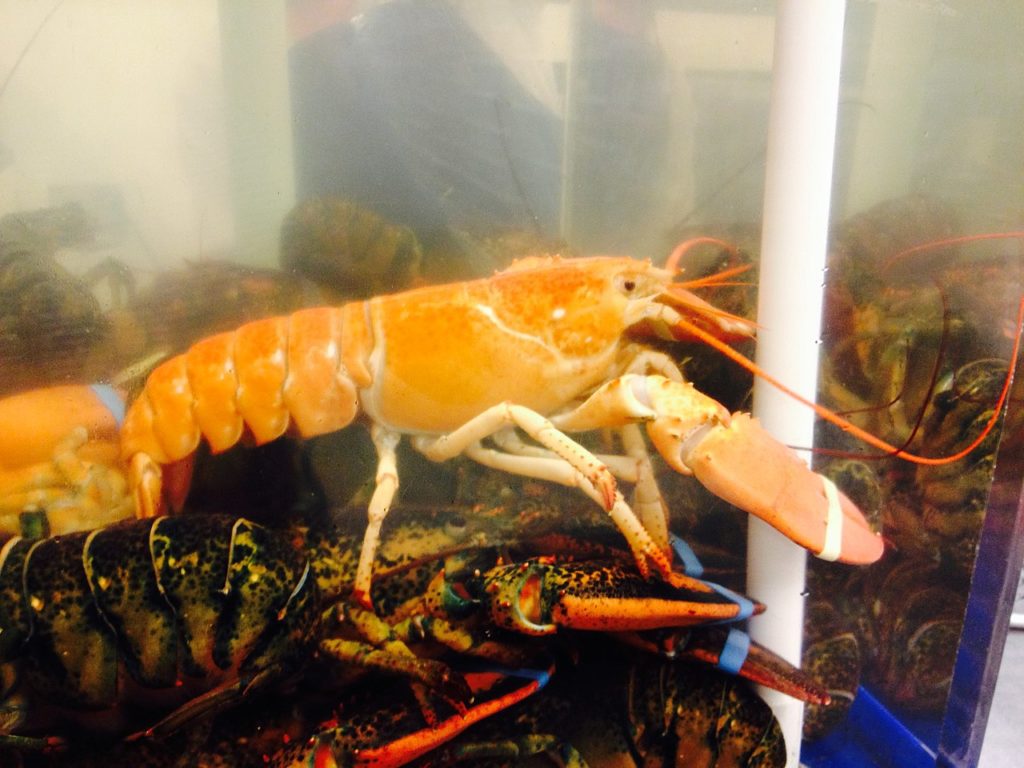 Ever heard of shiny Pokémon? In the series of video games, there has always been a remote chance that if you encounter a Pokémon it will be a shiny variant. A shiny Eevee may be a light gray color instead of its typical brown. The odds of this happening? Depending on the game, roughly 1/4096. Now imagine this happening in real life with a lobster. The odds of that being closer to 1/30,000,000.

Anyone who’s walked by a lobster tank can attest that these aquatic crawlers are generally brown and speckled, sometimes with green, red, and a little blue too. But pigmentation isn’t always consistent in nature, and there are always some genetic variables that can come into play. One such variable can result in an orange lobster, such is the case of Cheddar.

[The pictured lobster ISN’T Cheddar, but it is an orange lobster, so you can kinda get the idea of what they look like.]

Fittingly enough, Cheddar was found and rescued from the home of the Cheddar Bay Biscuit, Red Lobster. Mario Roque is the manager of one of the franchise restaurant’s in Hollywood, Florida. After recognizing he and his team had a rare lobster on their hands, they immediately started the process of trying to prevent the little dude from getting cooked. Ultimately they wound up contacting a local aquarium, Ripley’s in Myrtle Beach. Ripley’s sent a crew down to retrieve Cheddar, and posted the video of it to Instagram.

They note a lobster like this is a 1 in 30 million chance.

As for why this is a rare occurrence, part of it is obviously genetics, but another is natural selection. A bright orange lobster is going to be much easier to see in the watery depths than a regular old brown and greenish one. And yet, somehow, that didn’t stop another orange lobster from being found and rescued two weeks ago at the end of June. This one was also found in Florida, leading us to believe that your odds of finding a shiny Pokémon must also be substantially greater down there as well. But there’s more than just one type of odd lobster color!

There is an even rarer type of lobster, an albino one lacking any pigmentation. The odds of finding one of them are closer to 1 in 100 million. Of similar odds is finding a blue lobster, or as one has been described as a cotton candy lobster.

Blue lobster Haddie was found in 2021 by Bill Coppersmith, and subsequently named after his granddaughter. An in interview with NPR, Coppersmith states that upon seeing a glow coming from the lobster trap he set, he knew there had to be something unique inside of it. When opening the pot and finding Haddie, he knew this lobster wasn’t meant for surf and turf. Haddie now resides in the Seacoast Science Center in New Hampshire.

All this goes to prove that if a uniquely colored lobster managers to fend off natural predators, it has a high chance of becoming internet famous. While that might not be something that all lobster’s aspire to, at least it’s consolation that it pays to be different sometimes. Suddenly it feels like this story would pair well with some melted butter.