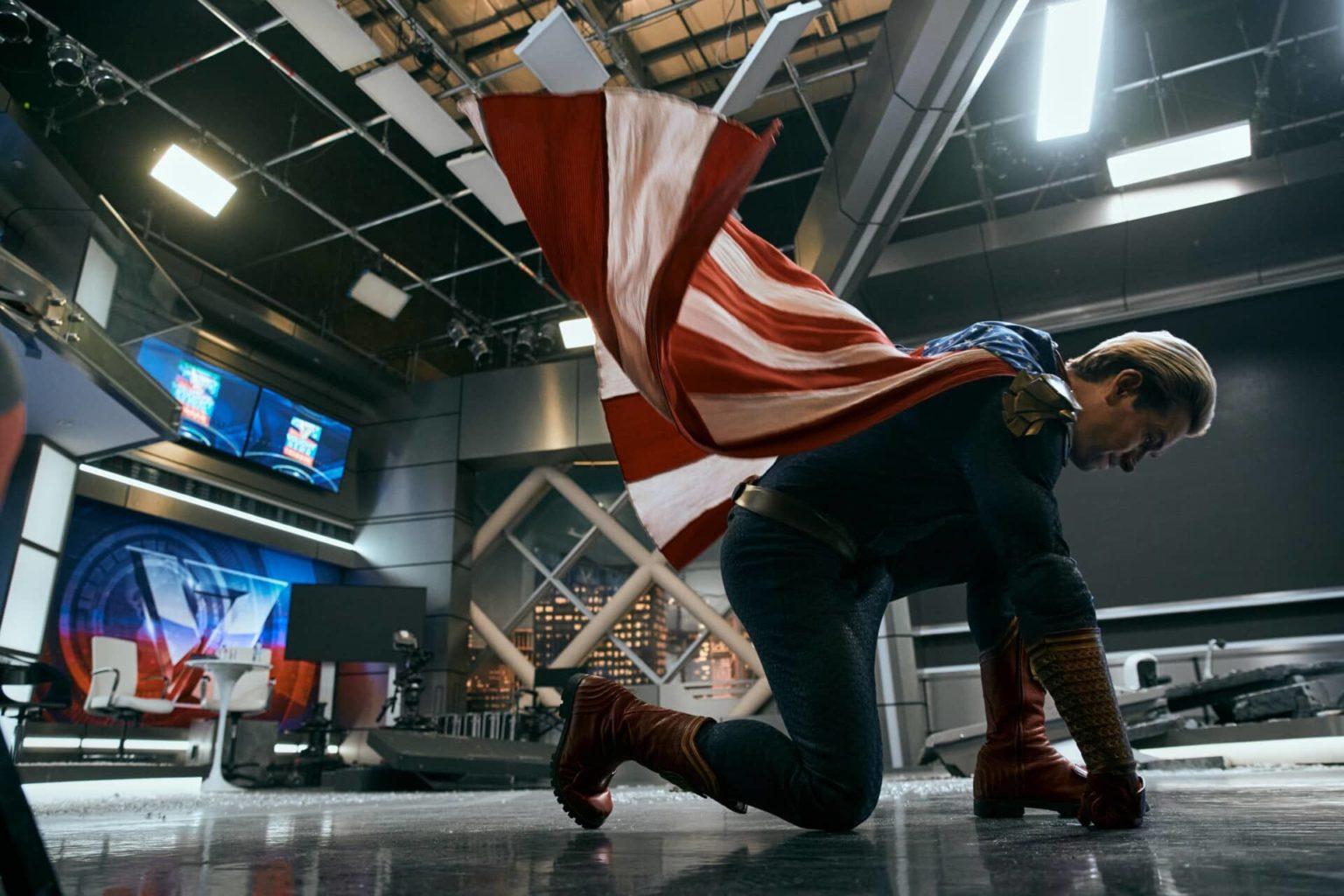 There’s no mistaking Eric Kripke‘s lust for absolute evisceration of social norms and current events. Amazon Prime Video giving him the power to do quite literally anything he wants solidifies “The Boys” as one of the most violently unfettered yet refreshing shows on television. In a testament to how good this show continues to be, after 3 seasons, it is still the answer to superhero fatigue.

“The Boys” makes no qualms about its bad intentions toward both the current state of things in the world and this time, the entire Marvel Studios canon. The previous two seasons felt like they were testing the limits with what they could and couldn’t do, with each episode seeming to escalate their controversy and outright mockery of current superhero behemoths. The real jumping off point for war with the MCU came in the final episode of season 2, where the series took direct shots at the “girl power” moment from “Avengers: Endgame.” It seems as if the success and positive reception to that emboldened Kripke and friends, who in the latest season tackle both Trump-era politics and loads a gatling gun of shots at the entire MCU.

What “The Boys” continues to excel at is not just their framework of subtle parody and satire powered by extreme violence and graphic content, but the series never falls into the trappings of becoming nothing more than parody and satire. It simply uses their mocking source as a jumping off point, and then crafts an enthralling and powerful narrative within its own story. This balance is tricky, and the show constantly walks the line of imploding in on itself with their consistent desire to boldly go where no other superhero thing has gone before. That fine line is where season 3 shines, loading up every single shot at everyone with a “come at me bro” attitude. And, backing it up with a solid, wickedly smart storytelling, one more than worth watching. Powered by stellar performances, biting social commentary, and over the top violence, “The Boys” continues to be one of the best shows on television.

All of your favorites return for season 3, which sees The Boys scattered about in their different lives after the fallout of the battle with Stormfront (Aya Cash) and Homelander (Anthony Starr). Butcher (Karl Urban) is still waging war against the Supes with whoever is left to fight with him, while Hughie (Jack Quaid) is working for the Bureau of Superhero Affairs under secret supe Victoria Newman (Claudia Doumit), who keeps Hughie and The Boys under a no kill leash. Starlight (Erin Moriarty) continues to be at odds with Vought and the Seven, and while they’ve experienced some peace, Homelander decides it’s time to make a play for a full on takeover. With options running out, Butcher and The Boys must reunite to find a secret weapon that can kill Supes, including Homelander himself. Their search leads them to Soldier Boy, who is said to have been killed by this weapon. Obviously, nothing goes as planned for anyone, and on both sides things are set in motion that cannot be undone and will have long lasting consequences for everyone.

The cast is of course vast, and season 3 adds series newcomer (but Kripke favorite) Jensen Ackles as Soldier Boy. There’s honestly too much to talk about in this season without getting into spoilers, and I’ve already done a deep dive into the series high point of “Herogasm,” so it’s ok to take a moment and talk about the addition of Ackles. He’s having a goddamn blast here, allowed indulged the worst aspects of his famed Dean Winchester character and channel it into a perfect parody of Captain America. Though he’s predominantly a plot driving character who on the surface could be as shallow as the satirical characterization it is attempting, Ackles brings a depth, charm, and downright unsettling emotion to the character of Soldier Boy. And, against every instinct, Ackles manages to bring at least some empathy to an otherwise disgusting and repulsive character. He’s by no means a hero, but he’s also a complex character with more to offer than a shield and singing on Solid Gold. The character is vastly different than his comic book counterpart, but remains a testament to Kripke’s brilliant interpretations of the source material. He takes what he needs and wants, and leaves the rest to create a show with the same characters but its own identity.

Everyone is great here, with each cast member getting more and more to do in their own little subplots. Nothing ever feels too sprawling, either. The A-Train subplot never truly conflicts with the overall story, and feels like its own mini-spin off without drifting too far from the core narrative. This is a tricky balance “The Boys” continues to play with, and more often than not comes out on the right side of things. Each of The Boys get their own struggles, trials, and tribulations, that all contribute the big showdown we know is coming but also delivers on more investment in each of them. No one is left to the background of meaningless screen time. Everyone has something to do and all of that is important, and while some of the conclusions don’t always land as well as we’d like (justice for Noir, he deserved better), Kripke and friends are purposeful in who’s onscreen and why they’re doing what they’re doing.

With everyone firing on all cylinders, it is amazing that Anthony Starr continues to stand out as one of the most haunting and unsettling villains ever put on screen. Starr brilliantly channels the emotionally stunted man child psychopath with unmatched power and unchallenged capacity for atrocity. Homelander is particular nasty this season, wielding his power and propensity for brutal acts of violence against anyone he happens to see at the moment. Starr has always been something special in “The Boys,” but season 3 brings something even more audacious to the character, and I can’t think of anything more terrifying than a homicidal maniac with the powers of Superman having a pep talk with himself in the mirror. He is THE villain of the year, and continues to be upsetting every time he wins (which, of course if you’ve been watching the show you should know the bad guys win far more than they lose) but you can’t look away because you have to see what happens next. Again, it’s just damn good television powered by top notch performances.

In addition to the increased violence, sex, and mayhem, “The Boys” season 3 ramps up both is social satire and refocuses its jabs at the superhero genre towards the Marvel powerhouse. Kripke seems to be using this season as an outlet for all of the frustration, anger, impatience and downright defeated feelings the last few years have been packed to brim with. What makes season 3 feel more complete is it never remains singularly focused. That is to say that while it takes plenty of shots at MAGA, GOP, and Conservative news outlets, he also goes after the worst of the posturing and virtue signaling from the other side as well. As much as the series goes after Fox News interviews and incel culture, the season also goes after Kylie Jenner’s ridiculous Pepsi commercial that “solves racism” and Gal Gadot’s “Celebrities sing Imagine during COVID” video, featuring real celebrities in on the joke.

While yes, “The Boys” is pretty clear about which side of the divide they fall on (apparently MAGA followers were suddenly hit with the realization that they are NOT the good guys in show) it doesn’t spare anyone from the diabolical mockery.

The only real point of contention for the latest season of “The Boys” seems to lay in the season finale, which left some feeling a bit underwhelmed and disappointed. Admittedly, it’s hard to top “Herogasm” in terms of narrative potency and visceral visuals. So pretty much any offering after such a high point is bound to be a little bit of let down. I don’t necessarily have the issues with it that many others did, who sited shifting motivations and drastic character arc changes for the sake of the plot and set up for Season 4, which was was confirmed roughly halfway through season 3. While these accusations are necessarily without merit, I get the sense that the show was and continues to be in complete control of its characters and narrative. “The Boys” is obviously working towards setting up what comes next, and my only real criticism would be more in how rushed it all felt to wrap up the multitude of storylines rather than any out of character moments. It’s hard to discuss without spoilers, but many of the protagonists’ actions in the third act of the finale didn’t feel as forced as some felt it did.

Minus a few perceived missteps in the finale, “The Boys” season 3 is a damn near flawless outing from a consistently great show. It’s a feast for the eyes whether you’re hungry or not, and continues to pack a wallop of a punch with every single swing. Overtly violent and graphic, “The Boys” never lets their boundary pushing visuals runaway with the heart of show, which has always been and continues to be the colorful cast of characters and their stories. Season 3 doubles down on everything you love about the show. Starlight’s naivety, Butcher’s diabolical quips and give no fucks antics, Hughie’s better nature, MM’s OCD, Homelander as a homicidal maniac, Ashley’s fear driven hair loss (and sexual ripping now apparently), The Deep and his love of sea creatures, and on and on it goes.

“The Boys” is just damn good television. Not for the faint of heart but rarely disappoints in what is promises to deliver. And given how things ended….bring on season 4, mate.

Seasons 1-3 of “The Boys” are currently streaming of Amazon Prime. You can watch the trailer below.