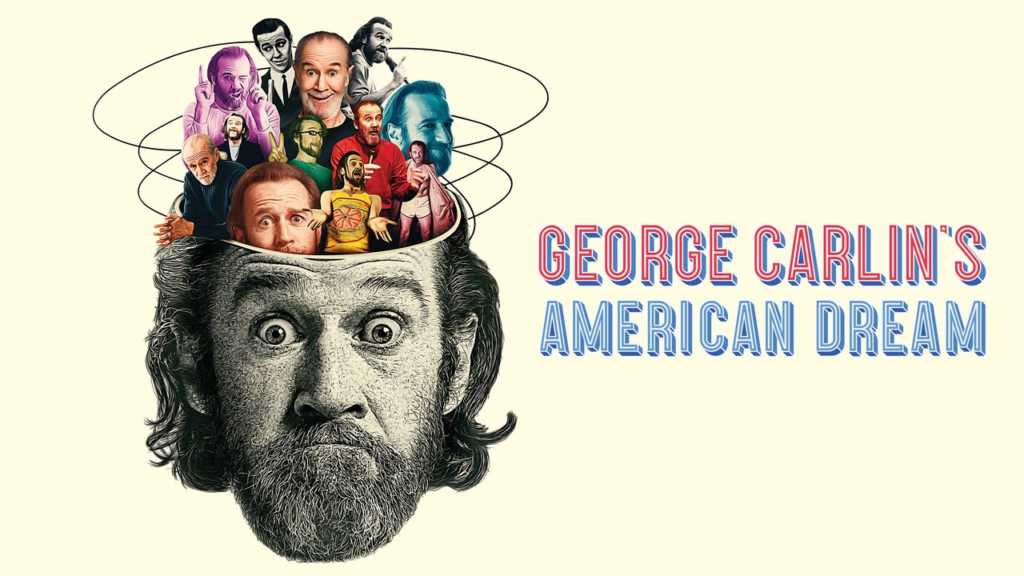 What can anyone say about the late, great, George Carlin that hasn’t already been said? Who would you get to say it? Directors Judd Apatow and Michael Bonfiglio seemed to have those questions in their minds when they created the two-part documentary “George Carlin’s American Dream.” Across approximately three and a half hours, the film covers the entirety of Carlin’s life, from his troubled homelife, to his last days. And to ensure that it had something interesting to say, and someone interesting to say it, much of the story is told by Carlin himself.

There’s nothing particularly groundbreaking or novel about “George Carlin’s American Dream,” which is not a negative thing. This documentary does virtually everything you would expect and hope that a cohesive documentary would do. Archival footage, interviews with relevant people, career-spanning info; all of that’s here. What keeps it compelling is how much the creators were able to pull from interviews and writings that Carlin did in order to let him posthumous tell his own story. It helps too that a bulk of the freshly conducted interviews were with George’s older brother, George’s daughter, and George’s second wife. Having these figures present gave the presentation more substance beyond just Carlin’s career.

If you’re a die-hard fan of the comedian, then there’s very little information here that will be new to you. More casual fans will probably be baffled by his transformation from clean-cut, to counter-culture, to social critic, to angry curmudgeon. The documentary portrays this effortlessly and through Carlin’s own words, helps explain why he moved his career and personality along the way that he did.

But even Carlin fanatics may be taken aback by the material presented from an interview done with his first wife, Brenda Carlin, and the personal accounts as told by his daughter Kelly Carlin. This is where we really get to know George as the troubled guy that he often could be. While he admitted that he was no stranger to drugs in his acts and interviews, it can be a harrowing experience listening to Kelly talk about some of the things she went through. Her mother’s story was one of years of isolation, denial of creative expression, and alcohol abuse as a coping mechanism. Hearing about the brutal arguments the two of them had doesn’t portray either of them in the most positive of lights at times.

That’s the point though; this is largely a look at the ups and downs in Carlin’s life and career. At the same time that the documentary features interviews with other comedians and their praise for him, it also shows how much of a struggle it was for George to get to where he was in life, and all that it cost him along the way. This is not to say that he was a bad man, in fact you may very well come away from this finding out that he was a far more loving and caring man than you may have ever suspected.

There are a few places of missed opportunity that would’ve been nice to see in order to make the documentary a bit stronger than what it is. From the number of comedians that they interview about Carlin, some of them were completely under-utilized. Chris Rock for example, shows up for all of one interview clip and that’s it. Surely the man had more than just 45 seconds worth of thoughts on George Carlin.

Any time Stephen Colbert was on screen was welcome, but Apatow and Bonfiglio missed out on an interesting opportunity with him. Colbert briefly touches on how unique it was for him, as a practicing Catholic, to listen to the openly atheist and former Catholic, Carlin, tear religion apart. Though it didn’t affect Colbert’s faith, it did open up his mind to being able to criticize the Catholic Church.

Later on, Carlin himself says how important it was to him to hear about how his comedy impacted individual people. It seems like Colbert would’ve been a perfect place to spend some time on about how Carlin’s style impacted him. It’s more obvious how people like Bill Burr and Jon Stewart were impacted by him, Burr especially. With people like Colbert or Rock, different life experiences were had either with religion or race. Yet Carlin’s material still spoke to them. George probably would’ve wanted to hear more about his impact on them.

Finally, there’s the issue of how they handle the final chapter in Carlin’s life. The documentary touches upon how dark this period was, but they don’t tackle it with the depth that it deserves. Every other transition in Carlin’s career is explained pretty in-depth and with a lot of detail as to how it occurred.

When it comes to Carlin’s final period however; we just get a couple bits about that transition period. We see an interview with Colbert where he states how he couldn’t follow Carlin’s material into the dark place it went. We get a very brief discussion about if Carlin’s final days were a display of nihilistic beliefs, or a kind of satirical look at nihilism through a comedic lens.

At this point, the documentary does start talking about Carlin’s declining health, but no mention is made of his trip to rehab. Carlin admitted himself due to his rising abuse of Vicodin and alcohol. Just before this, Carlin was dismissed after a four-year run at the MGM Grand Hotel for a set in which he became increasingly hostile to audiences. Maybe it’s not a coincidence that this period happened shortly after the death of Brenda in 1997. Even then, it got worse as it progressed. 2001’s “Complaints and Grievances” has a lot of anger, but there’s a lot of exaggeration and hyperbole to it. That hyperbole isn’t nearly as present in his last two specials, “Life is Worth Losing,” and “It’s Bad for Ya.”

Maybe this is just a hard part of George’s life for his daughter and widow to talk about but it’s also the most interesting in many ways. Carlin was always very critical, but eventually the criticism turned to a kind of personal contempt and hatred for people and not just institutions. It’s a sharp contrast between his turn as Mr. Conductor on “Shining Time Station,” something that was also glossed over. There’s something that really could’ve showed off another side of Carlin in a working capacity.

These issues aside, “George Carlin’s American Dream” is a very well-done documentary about the life of one of comedy’s most gifted performers. It humanizes Carlin to showcase the best and worst of him as a stand-up icon and as a person. A couple of missed opportunities don’t tarnish this in anyway, it just renders Carlin as the complicated individual he was. His legacy will likely survive for decades to come, and this documentary serves as a strong testament to that legacy. Whether you can quote Carlin’s acts directly or have a passing familiarity with them, there’s a lot to take away from “American Dream” including why there will never be another George Carlin.