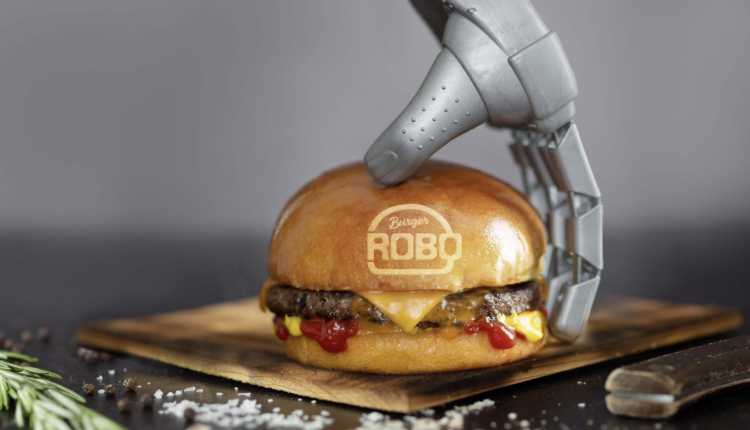 One small step for man, one giant leap for Skynet. The latest invention is yet another step towards the future the 80s promised. New Jersey has unveiled is very first, fully operational burger vending machine, the RoboBurger. It is located at the Newport Centre Mall in Jersey City, and is about as science fiction as you would imagine a vending machine that makes burgers would be. It greats each customer with a clever, “Hello, Human!” as if we needed another example of the machine takeover.

RoboBurger, called “the world’s first burger robot in a box,” is essentially a burger vending machine. Or as co-founder Dan Braido puts it, “a whole kitchen shoved into 12-square feet.” Customers can create a classic burger from a touch screen menu, and the machine can make it ready to eat in about 6 minutes. No waiters, no cooks, no frills. Just a box with a robot that spits out a fully customized burger. The menu includes 100% Angus pasture-raised Pat LaFrieda beef that rests on a potato bun. The cheese is aged Wisconsin cheddar. Yes, you can select ketchup and mustard as condiments and create your own style with a number of options.

The RoboBurger has the stamp of approval from NSF International, which monitors food and water quality. The machine has its own cleaning system that removes microbes and bacteria before making food. The factory that makes the machines is in Newark. Now you don’t have worry about whether or not the chef has a cold or spit in your food for being too picky. The RoboBurger also has numerous fail safes and safety measures built into its functionality, and will shut off when anything goes wrong.

As of right now, this is only operational RoboBurger in the country, but I’m sure if becomes as popular as I think it might, we’ll be seeing more of them pop up! If your curious to learn more, go to Roboburger‘s website for more information.

At least the machines are willing to provide some last meals before they inevitably turn on us and overthrow humanity.

I never thought I’d say this, but does anyone know how much tickets are to New Jersey?

Northern Lights May be Visible in The United States Tonight!

Razzie Awards Double Down on Tastelessness Towards Bruce Willis