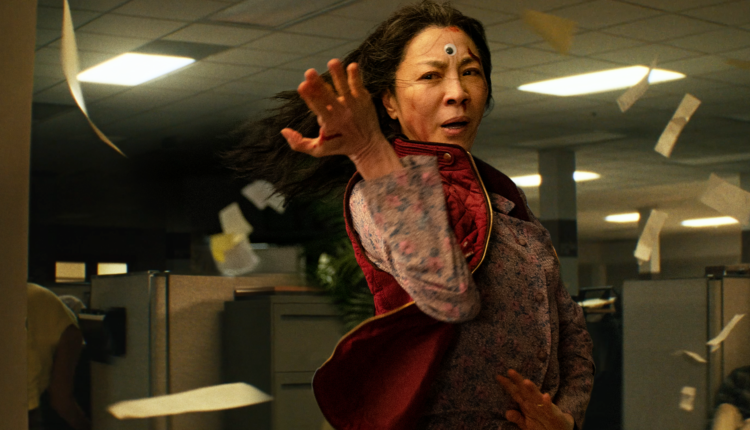 Michelle Yeoh is here to blow your damn mind in “Everything Everywhere All at Once.” The film is the latest brainchild of DANIELS (the directing duo composed of Daniel Kwan and Daniel Scheinert). At its core it’s a simple story of a woman trying to pay her taxes. However it’s wrapped in a brilliant maximalist wrapper.

Yeoh plays Evelyn, a Chinese American immigrant who never got to realize her full potential. She’s facing the horrors of a tax audit (executed by a barely recognizable Jamie Lee Curtis). While trying to balance the stress of the audit, her deteriorating relationship with her husband Waymond (a shining return performance from Ke Huy Quan of “The Goonies” and “Indiana Jones and the Temple of Doom”). She also is dealing with her strained relationship with her daughter (Stephanie Hsu) and an impending visit from her father (James Hong).

A Style Unto Itself

“Everything Everywhere All at Once” is a blend of odes to Hong Kong style martial arts films, the works of Wong Kar-wai, and splashes of DANIELS first feature “Swiss Army Man.” The duo, who got their start in music videos, bring that sense of musicality to the edit, choreography, and quite frankly every element of the film.

Things take a turn when Evelyn gets pulled into a multiverse madness plot. She is recruited to take down an impending dark force. Yeoh is the only actress we could think of who could pull off this particular plot. She shines with luminosity.

At its nucleus is a story of family. The specificity of the characters and their relationships (even in the most extreme universes) makes something for everyone to connect to. While you may identify with one or multiple themes (the immigrant experience, intergenerational challenges, AAPI identity, queer identity, and more) the story sings through.

It’s easy to overhype a film like this but we truly think this is worth multiple watches.