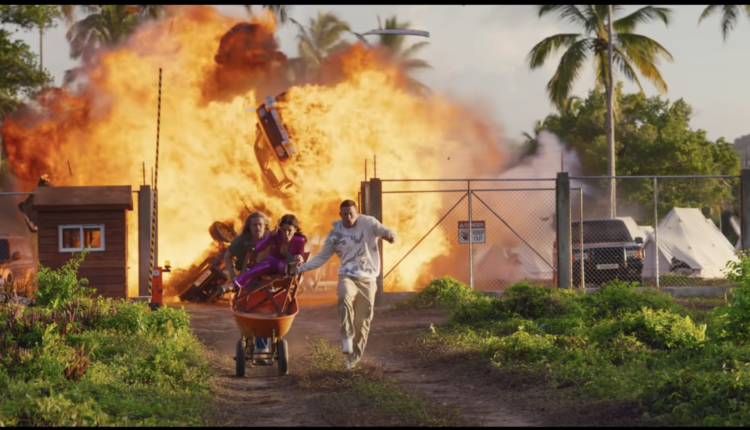 Perhaps it is being drowned in a sea of introspective and dramatic films. Or maybe it’s the constant state of unrest and volatility in our daily lives for the last 4 years that makes the predictability of “The Lost City” so comforting. For the first time in a long time, a telegraphed, by the numbers flick actually lends itself to be an enhancement rather than a hinderance.

I very rarely allow for predictability to be a compliment, but “The Lost City” is both fun and funny enough to be a damn good time at the movies. Knowing how the story goes does nothing to dampened the film’s overall affect, and I left the theater with a gigantic smile on my face. “The Lost City” is a throwback to the action/comedy genre of the mid 80s, and the kind of over the top jungle romp to fill a nostalgic void we didn’t know we had.

Directed by Adam and Aaron Nee, who also share the writer’s room with Oren Uziel (“Escape Room: Tournament of Champions,” “Mortal Kombat“) and Dana Fox (“Cruella,” “How To Be Single“), “The Lost City” is a kind of “Romancing the Stone” meets “Home Alone” meets “Jumanji.” I know none of those things feel like they should work in any way, but somehow they do, with the writer’s room and directors borrowing a hodge podge of genre elements to create a rather complete, coherent film. The run of the mill narrative is elevated by its stars, with Sandra Bullock and Channing Tatum dialing up their acting strengths to 11 and never letting up from start to finish.

“The Lost City” follows reclusive widow and romance novelist Loretta Sage (Bullock), who is kidnapped during a book tour by eccentric billionaire Abigail Fairfax (Daniel Ratcliffe) who wants her to translate an ancient language to uncover a hidden treasure in, you guessed it, the lost city of D. Her dimwitted cover model Alan (Tatum) decides to rescue her, despite having very little skills outside of posing and prancing ridiculously as her made up hero Dash every chance he gets. Of course, jungle adventure and shenanigans ensue, with a sprinkle of love where we least expect it throughout as a way to check all the boxes of the genre.

I truly don’t say any of these snide remarks about the predictability of “The Lost City” as a slight against the film. I can’t stress enough how comforting the lack of surprise actually ends up being, mainly due to how instantly clear it becomes that everyone involved is having an absolute blast making this thing. Everyone is in on the joke, and the Nee brothers seem to be taking the Taika Waititi approach by letting their actors tap into their strengths and run amok however they see fit. There’s no need to inject any kind of twists and turns and importance in the narrative of “The Lost City,” because that’s not the kind of movie we’re making here. It is an homage to a bygone era, one that wholly embraces the motto, “sit back, relax, and enjoy the show.”

I don’t know that everything can be this basic and this successful, and the not so secret ingredient to the overall success of “The Lost City” lies squarely with Bullock and Tatum. Not that the rest of the cast struggles; they don’t. But the two leads have incredible chemistry and expert comedic timing. We often forget how good Bullock is in roles like this, as she’s been on a bit more of a dramatic kick recently. Not that she can’t do both, but Sandy B has a knack for fish out of water comedies. Paired here with the affable but extremely charming Tatum is so perfect you have to wonder why they weren’t paired together sooner. Dumb Tatum is my favorite Tatum, as he’s able to really let his comedic skills fly here and demonstrate why comedy is where he thrives. There have been countless times where most of his comedic work has been gated behind cameos (ones that often leave me saying that needed more Tatum), but “The Lost City” proves that he is more than capable of maintaining that prowess in a leading role.

Bullock and Tatum carry the film to a new level of enjoyment, humor and heart that wouldn’t otherwise work without them. “The Lost City” doesn’t break any barriers or boundaries, and on paper (and screen for that matter) operates on a very tight, concise, heavily borrowed narrative. But because it wholly embraces these things and gives all the power to its stars, the film transforms into a something much more entertaining than the sum of its parts. It is truly a laugh out loud action comedy, one that won’t leave you with any kind of lasting impression but will leave you feeling good and satisfied.

I’ve seen close to 75 films so far this year, and “The Lost City” ranks number one as the most fun I’ve had in the theater to date. I said what I said.

If there’s anything that doesn’t work quite as well, it’s the “Home Alone” story line that doesn’t quite have the legs of whatever Bullock and Tatum are doing. I don’t mean the Kevin booby trap part, I mean the mom doing whatever it takes travel-wise to get her son part. It mirrors the antics of Catherine O’Hara so closely that the only thing missing is the late John Candy, but that’s remedied by adding Oscar Nunez as the eccentric equivalent and replacing the Kenosha Kickers with animals. Yes, really.

Narratively, it makes sense to leave our A storyline to give us a bit of break, but “The Lost City’s” treasure is solely with its stars, so every time it breaks away from them to serve us up an ok storyline working to converge on the main story, it is much more resented than embraced. It is no fault of Da’Vine Joy Randolph, who plays Sage’s publicist Beth on a mission to find and rescue her friend and Alan. Randolph is just fine, and makes the most of her screen time as best she can. It is simply that the subplot isn’t nearly as compelling as the main plot, and we end up spending more time with a lackluster storyline than we want, mainly because we want more Bullock and Tatum.

The last two things are more nitpicks than actually complaints. Radcliffe’s Abigail feels a bit like an import of his spoiled rich boy villain from “Now You See Me 2.” He’s a bit too familiar in ways that he probably shouldn’t be, and while he’s very much enjoyable and clearly having a blast, it’s hard not to wish he could do something slightly different as a comedic villain.

And lastly: MORE BRAD PITT! Pitt is more than content with funny cameos ala “Deadpool 2,” and as talented and versatile as he is, there is nothing quite like fun Pitt. Spoiler alert (or not if you’re paying attention because there’s nothing to really spoil if you already know the entire story from the trailer), he isn’t in the film for very long, but he makes the most of what little screen time he has. So much so that you kind of wish he had much more of it even though the story doesn’t really allow for that. Relish in his brief appearance here because it’s a delight.

“The Lost City” make lack originality, but it makes up for it by being one of the funniest and enjoyable movie going experiences of the year. It’s got a ton of comedy, solid action, and some tender moments that are all well balanced by the Nee Brothers and supercharged by the onscreen talent of the film’s stars. It’s a simple, straightforward, easily accessible film that is the kind of thing we could use right now. Sometimes movies can just be fun. They don’t always have to mean something. Sometimes, the best movie is just Bullock in a glitter jumpsuit and mostly shirtless Tatum running through the jungle making dick jokes and slowly falling in love on their throwback adventure. That’s about all “The Lost City” has to offer, and it’s a damn good deal that’s more than worth the price of admission.

I think I’ve made my point. Don’t be a human mummy. Go see “The Lost City.”

“The Lost City” hits theaters March 25th, 2022. You can watch the trailer below.