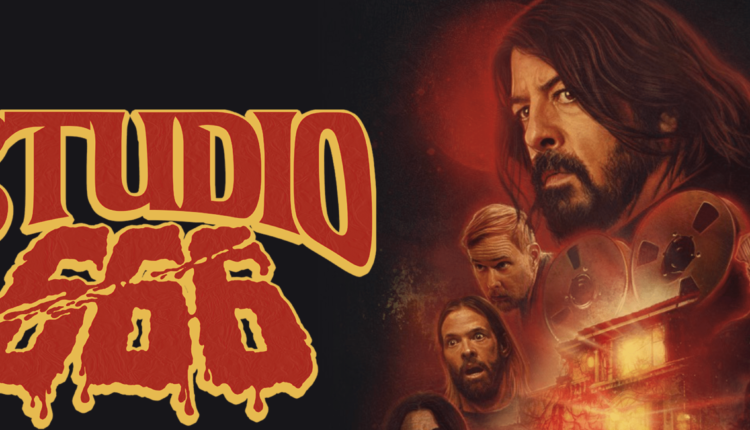 Can we all just take a moment and appreciate Davel Grohl? He is truly one of the last remaining relevant rockstars of our generation who not only continues to make music, but never shies away from pointing the finger back at himself and his own ‘celebrity’ status.

Somehow after 30 years in the music industry, he’s managed to stay out of the kind of trouble you expect comes standard with rock gods. All of that self awareness takes us into “Studio 666,” a horror comedy that stars the band as themselves and Grohl front and center. While it doesn’t add much to the genre itself, it most certainly solidifies band Foo Fighters as the kind of genuinely funny, self aware rockers who would be a blast to have a beer with, a fact we all hoped would be true and turns out to be here. “Studio 666” may overstay its welcome- and doesn’t offer much in the way of the genre- but it is ridiculous in the best and worst of ways, making it exactly the kind of watch you would expect from the premise.

“Studio 666” is directed by B.J McDonnell and written by Jeff Buhler and Rebecca Hughes, with a story by Grohl himself. The film stars Foo Fighters, playing themselves as they try to create their 10th studio album. With mounting pressure from their manager and the need to stay relevant in the ever changing rock world, they decide to record their new album in a new place to jumpstart their creativity. They are led to a secluded house in Encino, where a band called Dream Widow was rumored to have died in during the early 90s. Of course, shortly after the band moves in and tries to record their new album, supernatural events begin to occur that will undoubtedly change the band forever.

Let’s talk about what doesn’t work in “Studio 666” first before we get into what does.

It is a very strange film to receive a theatrical release. Not necessarily due the pandemic and changing theater-going patterns, but because this film is tailored-made for streaming. It stars musicians, not actors, and operates on a level that seems more like an SNL sketch stretched into a feature length film. “Studio 666” is the kind of film that would never ever see the light of day were it not for the fact that it is created by and stars the Foo Fighters. It is the kind of film that you and your friends make in your backyard, but since you’re not a rock god with rock god money, the only person that ever sees it is your mom.

It is so strange that in this day and age that something like this lands in theaters and nowhere else. I know this seems like a none issue, but the release method is extremely relevant to how the film is received. “Studio 666” is fun, funny, and gory, but all of those things aren’t done well enough or high minded enough to pin their hopes on box office returns. It takes away from the discussions we should be having about something this silly, and something like Netflix or Hulu is much more suited for a kind of Foo Fighters home movie. The truth is, no one is rushing to theaters to watch Dave Grohl be possessed by a house demon. But everyone would tune in for that very premise if Netflix suddenly pinned it to their most watched, heavily marketed section.

This is really important, because the film is hindered by its own indulgence. That’s not to say that film thinks of itself as being better than it is, but more so that the film thinks there’s more to the story than is actually there. The film feels stretched beyond its means, and while it delivers on most of what you want from it, none of it is really all that memorable even within the genre of horror comedy. It checks all the boxes better than most, sure. But “Studio 666” struggles to go beyond a bunch of friends with money and time to spare so they decide to make a movie about themselves. These faults are even more glaring in a theatrical experience, as it doesn’t quite feel like a waste of time as much as it feels like a waste of effort. This is a movie you curl up on the couch and enjoy at your leisure, not one you put on pants for.

All that being said, “Studio 666” is really, really funny and has blood and guts to spare. Grohl is leaps and bounds beyond his co-stars in terms of being camera ready, but all of them seem to be completely dialed in to the kind of film they’re actually making. Despite the film’s narrative being about the power dynamics and demonic entities messing with their vibe, you can tell why the Foo Fighters have survived for so long. There is a real comradery among the band members, which is recognizable even in their manufactured malcontent during their sessions. These guys really do just love playing music together. So much so that they can make an entire film that makes fun of their own dynamic, even introducing supernatural forces to exaggerate it.

And that’s really the charm of “Studio 666.” These guys know that what they’re doing is silly and not be taken seriously, and Grohl leading the charge is the best foot forward. The film touches on a few industry woes such as relevance and creation and even the devils music of rock and roll (a recurring theme that is a really funny running joke), using the supernatural elements as a vehicle to drive home insider jokes and jabs that only a band like the Foo Fighters can get away with. The guys know that they are the brunt of every joke, and they all dial it up to 11 both in the self awareness of themselves and brutal, over top deaths that occur as the film starts to ramp up. The jokes and blood are over the top, and it’s where the film is the strongest. When it leans in to the double entendre of both the music industry and low budget horror gore, “Studio 666” thrives and delivers laugh out loud jokes with some truly magnificent deaths.

Overall, “Studio 666” is good enough to be recommended but not quite good enough to warrant leaving your house to see. I enjoyed the hell out of it, but legitimately wish I didn’t have to leave my house to see it. It’s not all that bad in the wrong ways and epically bad in all the right ones, making it a perfect streaming vehicle and not so much a must see theatrical one.

“Studio 666” is now in theaters. You can watch the trailer below.

Florida Man Steals Crossbow by Stuffing it in His Pants