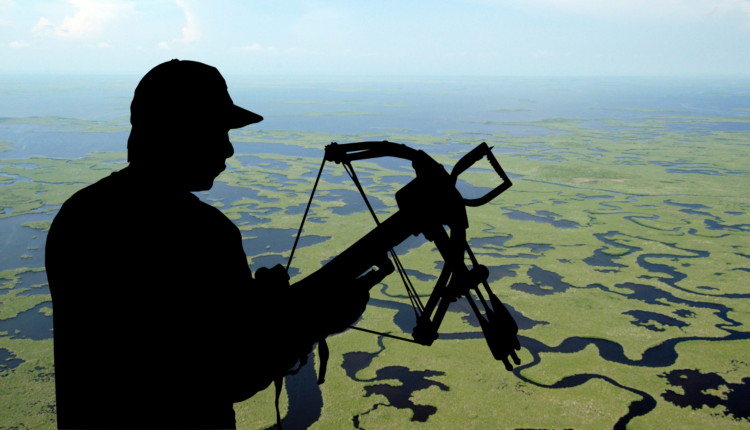 Florida Man Steals Crossbow by Stuffing it in His Pants

“Is that a crossbow in your pants, or are you just happy to see me?” “It’s a crossbow.”

No that’s not the start of a bizarre Mae West hunting movie, it’s just an imaginary exchange that could’ve actually taken place in Florida last month. Because of all the states in the union where someone would attempt that, of course it’s a Florida man. If you’re confused or trying to imagine what someone would look like with a crossbow in their pants, good news; we’ve got photo evidence!

The theft itself took place in Mims, Florida back on January 22nd, but wasn’t actually noticed until a couple weeks later. On February 6th, one of the workers at a True Value store noticed the weapon was missing.

If you’re wondering how a crossbow can just be left out in the open for someone to steal, well, it wasn’t entirely left out. The weapon was “secured” with zip ties, but the alleged thief, Darren Durrant, also stole a tool to cut the ties and then stuff the crossbow down his pants. Want to know what that looks like? Well it starts like this:

That area we circled in red is a crossbow, not his equipment. Well, it IS equipment because it’s a crossbow but it’s not HIS because it’s stolen, and it’s also not his, “equipment.” But you probably knew that already. And now you also know what it looks like if you stuff a crossbow in your pants and try to hide the rest of it under your shirt.

You may also notice that he’s walking with a crutch in that picture; turns out he probably didn’t need that either because he was walking perfectly fine without it when it come time to stuffing stolen goods down his pants. Or maybe he really does need it and we’re mocking him for no good reason. Then again he’s stealing a crossbow, so he has it coming. Apparently he also has two prior felony theft convictions, so it’s not like this is new for him. Not to mention, Durrant was issued an arrest warrant on this case while in jail for an unrelated burglary charge in Seminole County.

So let that be a lesson to you everyone, don’t go stealing crossbows in your pants! It’s illegal and you’ll look like a complete doofus in the process if those pictures are anything to go by.