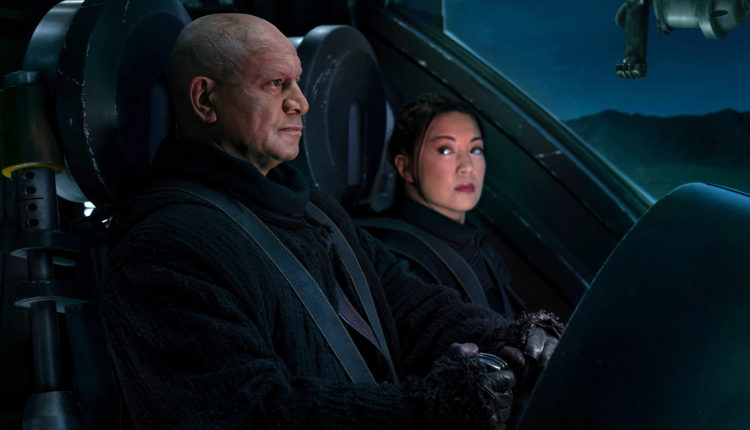 That “The Book of Boba Fett” Finale Was…Bad [Review]

Yeah, sorry, we’re not mixing words here. Disney+’s “Star Wars” series “The Book of Boba Fett” finale was not good. We’d go so far as to say it was outright terrible. We had such high hopes for it, too. With Temeura Morrison and Ming-Na Wen as leads, a tried and true production team and pretty much unlimited resources, “Book of Boba Fett” should have been amazing.

You’ll notice we’re trying really hard not to give specifics- aka spoilers- for at least another day or two.

To be fair, 2 of the 7 episodes weren’t terrible. The only problem? They were absolutely “The Mandalorian” episodes. This isn’t a bad thing, really. Episodes 5 and 6 (directed by Bryce Dallas Howard and Dave Filoni respectively) of “Boba Fett” hold all the promise of well-crafted storytelling and top notch filmmaking.

But then to go BACK to amateur hour scripts, frankly baffling cinematography and editing choices, is maddening.

It’s not really Tem or Ming-Na’s fault. They did what they could with these iconic characters, finding gems in an otherwise disappointing script. We would go so far as to put the blame in writer/director Robert Rodriguez‘s lap.

When he was announced as the principal director for “Boba Fett,” we were ecstatic. This is the guy who brought us “El Mariachi,” “From Dusk til Dawn,” and “Sin City.” Letting him play in the “Star Wars” sandbox was like a dream come true. Even though his episode of “The Mandalorian” was penultimate in terms of laying the groundwork for the next series, it…didn’t LOOK good. Something felt off about the locations, the VFX, and even the camera work. It’s like everything that makes Rodriguez special as a filmmaker just didn’t translate into the galaxy far, far away. But, we kind of assumed it had to do with maybe directional suggestions from Filoni and Jon Favreau (mostly Jon). Hell, maybe it’ll work itself out for “Boba Fett.” Yeah. About that.

Did someone maybe mention to Rodriguez “Star Wars” ISN’T “Alita: Battle Angel?” After seeing the vespa gang of cybernetically altered kids in Mos Espa, we’re going to guess no. The ‘mods’ are…ridiculous, frankly. They are the least “Star Wars-y” thing to happen to these Disney-led projects to date.

These colors? These designs? There’s totally a way to make them fit in-world. But it’s almost like the decision was to keep them as far out of theme as possible. They’re ‘Mods,’ because they’re modified, right? Not because they look like London mods from the 60s? (Also, how about the fact that Drash has off-the-rack Converse shoes with NO modifications? How lazy is that?) And no, they are not a strong tribute to George Lucas‘s “American Graffiti” past. If you want to make THAT argument, look no further than the Naboo cruisers from the prequels.

If you enjoyed “Book of Boba Fett,” more power to you. It was missing so much of what “The Mandalorian” made work. Pacing, engaging scripts (even with no dialog at times), and even classic character uses all felt better in Mando.

Our hopes remain high for Deborah Chow‘s upcoming “Kenobi” series. As well as the Cassian Andor series, which reportedly already has a second season order. “Kenobi” will debut on May 25th, 2022.

“The Mandalorian” seasons 1 and 2, as well as “The Book of Boba Fett,” are available to stream on Disney+ now.