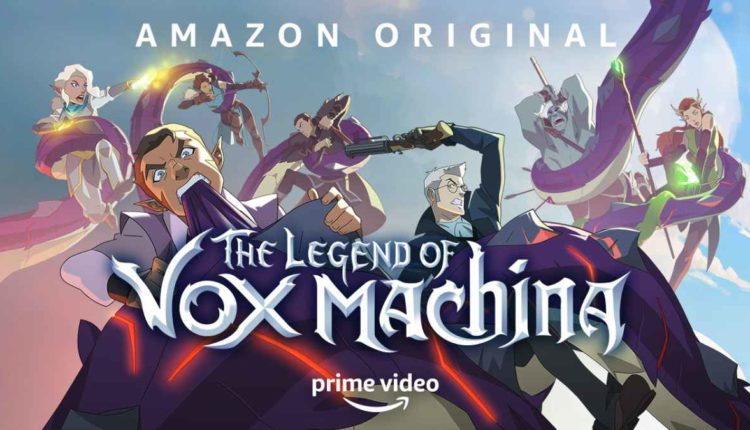 The world of Tal’Dorei is beset by evil. Facing a rising malevolence like that of which the fantastical land has never seen, will a stalwart group of heroes, pure of heart and strong of character, arise to face the threat? No.

But the beer swilling, foul-mouthed, rough-and-ready adventuring party Vox Machina will have to do. Using their unique mix of roguish charm, barely stable friendships and extreme violence, Vox Machina are ready to kill some dragons, seduce your daughters, and drink everything available in the bar.

Based on the characters in the Dungeons & Dragons campaign featured on the wildly successful weekly show “Critical Role,” Amazon Prime’s “The Legend of Vox Machina” brings the adventures of the titular group to viewers in the form of an adult animated fantasy/action/comedy, with the whole original cast along for the ride.

If you aren’t familiar with “Critical Role,” just picture eight friends sitting around a table doing silly voices at each other for six hours straight every Thursday, that’ll give you the gist of it. I’m aware for the uninitiated, that might sound a bit strange.

Now I’m not saying it’s bad. For its many devoted fans, the adventures to be found on “Critical Role” are truly engaging, unmissable viewing. Following the exploits of the party as they crash their way through Dungeon Master Matt Mercer‘s carefully constructed worlds is reliable comfort viewing. Something in the manner of a familiar podcast, or a long-running soap opera, or somewhere between the two, with magic and tits and a lot of swearing.

Luckily, you don’t need to be a hardcore fan of “Critical Role” to enjoy Amazon Prime’s “The Legend of Vox Machina.” While the extensive adventures of “Critical Role,” hundreds upon hundreds of hours of freeform collaborative storytelling and improvised roleplay, isn’t easy to boil down into a 30-minute animated narrative, the show does stand on its own feet, ready for new viewers to jump right into the fun.

And it IS fun. Full of wizards, dragons and sword wielding warriors, “The Legend of Vox Machina” is no dramatic animated “Game of Thrones.” They are not afraid to use the adult rating to the fullest, this is a party of a show, with blood spraying, wall to wall drunken vomiting, and Halflings dropping f-bombs all the way. The violence is as graphic as anything seen in “Invincible.” with swords slicing through bodies and dragons literally tearing people limb from limb. Along the way it’s also not too shy to have some bare breasts and seemingly hit a fuck-a-minute language quota.

The animation is something of a mix of western and Japanese influences, and is again close in overall appearance to Amazon Prime’s superhero show “Invincible.” While a little visually simplistic overall compared to what genre fans might be used to, “The Legend of Vox Machina” bears some pretty great looking combat, with fast moving, blood-spraying visceral battle scenes akin to “Vampire Hunter D,” and an interplay of characters during action sequences that really does make our intrepid heroes feel like a cohesive team. Your appreciation of the occasional glaring mix of CGI with traditional 2D animation may vary.

While the score is suitably epic in nature, a sweeping fantasy vibe suitable to the world it fills, but doesn’t jump out as particularly unique. With the no-holds-barred vibe of the show, somehow I feel we missed out on an awesome 90’s style cartoon opening theme song to truly fit the mood and come out swinging.

Of course it would be impossible to recast any of the heroes making up the adventuring party of Vox Machina, and the whole cast makes their return to their respective characters. In particular, Ashley Johnson and Taliesin Jaffe, in their roles as plucky Gnome Cleric Pike and effete gunman Percy respectively, are strong contenders for the best performances in the show.

While everyone in the cast is a skilled voice actor, making the jump from live action improv performance to fully voice acting an animated characters is a very different beast, and it’s clear that here and there a little something is lost in translation. In particular, the inimitable facial expressions and infective comedy performances of Sam Riegel just aren’t quite as charming when we can’t see him. While Riegel’s scene-stealing over-sexed Halfling bard Scanlan is still on top form as the show’s main comedy heavy lifter, it’s nothing compared to how hilarious Riegel is live as the character.

What “The Legend of Vox Machina” has that no other show does is the relationship between its cast. These heroes are best friends, they know each other inside out, and the same can be said of the close knit friendships of the cast. Right from the start, there’s a natural feel to the relationships here, and that’s something impossible to pretend. As the show continues on I look forward to seeing more of the relationships between our eager heroes as they battle monsters and have a damn good time, tossing back beers and engaging in the gentleman’s sport of ball-tag.

The first three episodes of “The Legend of Vox Machina” are live on Amazon Prime. New episodes dropping every Friday.

The Return of Tax Returns!