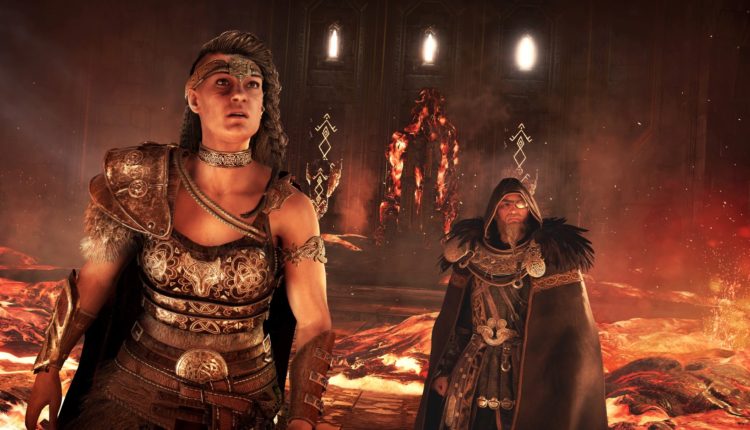 Fans of Assassin’s Creed Valhalla, we’ve got some real great news for you. The Viking adventure is getting yet-another expansion in the new year! Ubisoft announced “Dawn of Ragnarök,” were players will get the chance to see Eivor adventure as Odin once again!

Eivor becomes Odin and travels to the dwarven realm of Svartalfheim, where the immortal fire giant, Surtr, has kidnapped Odin’s son Baldr. Fantastical mythic realms are not the only new features players can expect: in Dawn of Ragnarok, Odin will have access to new divine powers that allow players to absorb enemy powers and use them to their advantage

According to Xbox, “Dawn of Ragnarök” will be available as a separate purchase for owners of the game after players reach settlement level 4 and unlock Valka’s hut. It’s recommended that players be around level 340. All Xbox players that purchase the expansion between December 13th, 2021 and April 9th 2022 will immediately receive the in-game Twilight Pack. The pack includes the Dellingr’s Envoy Raven Skin, the Havardr Lynx Mount, the Twilight Gear Set, and the Algurnir Dane Axe Weapon.

In Assassin’s Creed® Valhalla: Dawn of Ragnarök, the most ambitious expansion in franchise history, Eivor must embrace their destiny as Odin, the Norse god of Battle and Wisdom. Unleash new divine powers as you embark on a desperate quest through a breathtaking world.

There’s also news of a new free update for all “Assassin’s Creed Valhalla” and “Assassin’s Creed Odyssey” players! Assassin’s Creed Crossover Stories is a cross-game project that brings Kassandra (Odyssey) and Eivor (Valhalla) together and includes a new story in both Valhalla and Odyssey. Odyssey will get a new story titled Those Who Are Treasured, and Valhalla will get A Fated Encounter. You’ll need to own both games to experience everything that Crossover Stories has to offer. To play A Fated Encounter, Valhalla players will need to reach settlement level 4 and unlock Valka’s hut. Odyssey players will need to complete Chapter 1 and reach Megaris to access Those Who Are Treasured, although it’s recommended that players finish the main game to avoid spoilers.