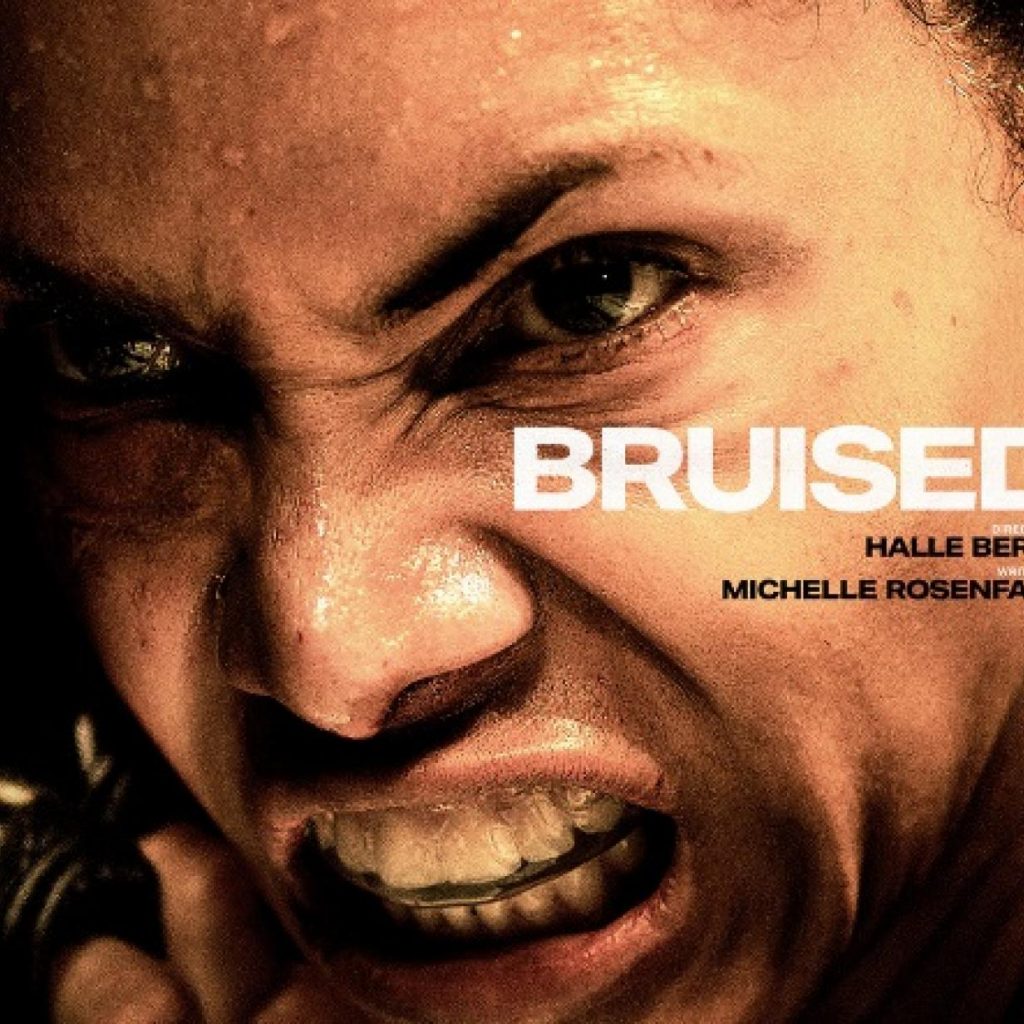 Hollywood seems to be an impasse when it comes to making MMA movies. They either portray it as a little more than glorified street fighting- like “Fighting” and “Never Back Down“- or use it as a catalyst to tell stories about broken families and people (like “Warrior“). “Bruised” is more the latter, using MMA as the guise to tell a story of redemption. It surprisingly does both pretty well. It’s far more heavy on the family drama and redemptive story, but it actually does a pretty good job in displaying some real MMA training and fighting.

There’s still obviously some of that Hollywoodization and ya, some street fighting. But there isn’t nearly as much as one would expect from another attempt at trying to capture MMA on screen, and “Bruised” is better when it’s focused on people instead of the actual fighting. This is what made “Warrior” such a success, and “Bruised” seemed to have taken a lot of notes on what makes a decent MMA film.

It’s not the best, and doesn’t get everything right, but “Bruised” is better than a majority of similar entries, making it one of the better MMA movies out there.

“Bruised” is written by newcomer Michelle Rosenfarb. Halle Berry directs and stars. Berry makes her directorial debut here, and actually proves she has a knack for bringing stories to life. The film is powered by the gritty cinematography of Frank G. DeMarco, who matches the struggles of the film’s leads with street-level realism of hardship living.

There’s a lot that works here, and fans of MMA should be warned that “Bruised” is much more of a redemptive drama than an action-packed fighting film. MMA takes a back seat to the main plot, which is a disgraced fighter named Jackie Justice (Berry) attempts to put her life back together after her 6 year old son shows back up on her doorstep after his father passes away. The boy Manny, played by Danny Boyd Jr. (“Stranger Things,” “Watchmen“), doesn’t speak, traumatized by his life before entering into Jackie’s, and both of them have a LOT of trauma that they must try to work through together.

Here’s the thing about MMA that Hollywood can’t seem to get right even with something on better end of representation like “Bruised:” MMA has a ton of beautiful underdog stories built into the sport already. Hell, take Glover Texieria, the Light Heavyweight Champion of the world right now. Glover fled his hometown due to extreme gang violence, almost died trying to get to America, joined a gym just to survive and became a top title contender after working his way up the ranks. He lost his title fight, and was counted out as nothing more than an old man still fighting for paychecks. Then, at 42 years old (which might as well be 100 in fighter years), he goes on a 5 fight win streak, gets another title shot, and this time WINS in two rounds on his 42nd birthday. That is a Ron Howard feel-good sports story just waiting to be made, but Hollywood feels that they have to create fictional fighters and backstories instead of capitalizing on the ones that already exist.

The other big problem with Hollywood MMA is that every fighter ever portrayed is riddled with life trauma. They are almost always at rock bottom when we meet them. They’re all drunks, addicts, or in the streets and that’s just NOT the case in real life. I get it, we have to dramatize things for entertainment value, but there is a perception that all fighters are nothing more than hooligans inflicting violence on other individuals as a form of brutal therapy. While there are certainly fighters with plenty of issues outside of the cage (Luis Pena, Jon Jones, Conor Mcgregor), most fighters are generally intelligent, kind, humble, elite athletes who have dedicated their lives to being incredible in a very difficult sport. A majority of them are family men and women with a skill and propensity for in cage violence only, and I wish that that was on display a bit more.

“Bruised” commits the latter mistake more than the first, as Jackie is the pinocle of a washed up, tragic, rock bottom fighter just trying to make it. That’s not a bad thing, and it’s done really well in that regard. While I may wish there was more to the stories being told, Berry expertly makes you feel for Jackie, and portrays her a woman who really wants to do right but can’t seem to exorcise her demons.

Berry is also keen to provide viewers with some very real MMA training instead of make believe training montages that don’t even happen. She has gone on record to say that her training was some of the hardest work she’s ever had to do for a film, and it shows. “Bruised” does more than just show sparring sessions. We get a small taste of drills, workout regiments, and how horrible weight cuts are. The film pulls significantly from things like “Creed” and “Rocky,” borrowing almost beat for beat plot points of the classic underdog story. It does so rather well, so while the film may be familiar at its core it makes enough unique choices to feel unique.

Berry is really good in front of the camera, demonstrating her range and ability that has made her a star when she wants to be. It’s not necessarily the best acting from her, but it’s better than a number of appearances she’s had of late. The real standouts are actually Shelia Atim (relatively new to the screen, big on the stage) as Jackie’s trainer/lover Buddhakan and Danny Boyd Jr. as Manny. Atim is wonderfully nuanced and deeply developed, and that is more attributed to her performance that how her character is actually written. She’s really good I hope to see more of her. Boyd Jr. turns in a really solid performance that is mostly silent. Manny doesn’t speak throughout the entire film, but conveys all of his emotions and trauma and fear with nothing but his facial expressions. It’s pretty wild to see a young child actor capable of acting without words, but you truly feel for Manny and want him to find peace.

“Bruised” is solidly acted, and solidifies itself as one of the better MMA movie outings. I have different asks and wants from Hollywood as a diehard MMA fan, but I understand that they’re slow to catch up to what could be truly compelling cinema. MMA is still very young despite its global rise, so hopefully as it continues to make a name for itself in the sports world, we’ll see less and less of these tropes that permeate most of “Bruised” and other films like it. Luckily, this one does most of the tropes better than pretty much every other entry except for “Warrior,” which in my opinion stands alone as the best MMA film to date.

The film has a lot of flaws, and is by no means a perfect film. It’s pretty dark, and glosses over a lot of the more harrowing traumatic experiences despite trying to put them front and center. It does more justice to actual fighting and training than most, even if “Bruised” downplays the unmatched skill of Valentina Shevchenko for entertainment purposes. That’s more of a “me” thing as an MMA fan; it’s jarring to see probably one of the best pound for pound fighters in the world doing fight choreography instead of decimating opponents with her near perfect fighting abilities. Don’t misunderstand, “Bruised” has some solid fight choreography, and recreates some realistic MMA exchanges that varies it up enough to display the many skills MMA takes to execute well.

“Bruised” is flawed but better than you might expect. Berry proves she is skilled both in front of and behind the camera, and clearly has a story to tell here. The film may be a little too heavy handed in its approach, and falls victim to some of the more movie fighting tropes than I would’ve liked. It may be cliched, but its aware enough to execute them pretty well.

If you’re a fan of fight movies and a fan of MMA, I’d say “Bruised” is worth checking out. If for nothing else, you can watch possibly one of the greatest fighters in the world throw looping, amateur punches that you know damn well she has never and would never throw in an actual fight.

I’m sorry, I just can’t let “Bruised” off the hook for that. Pun intended.

Catch it on Netflix now.