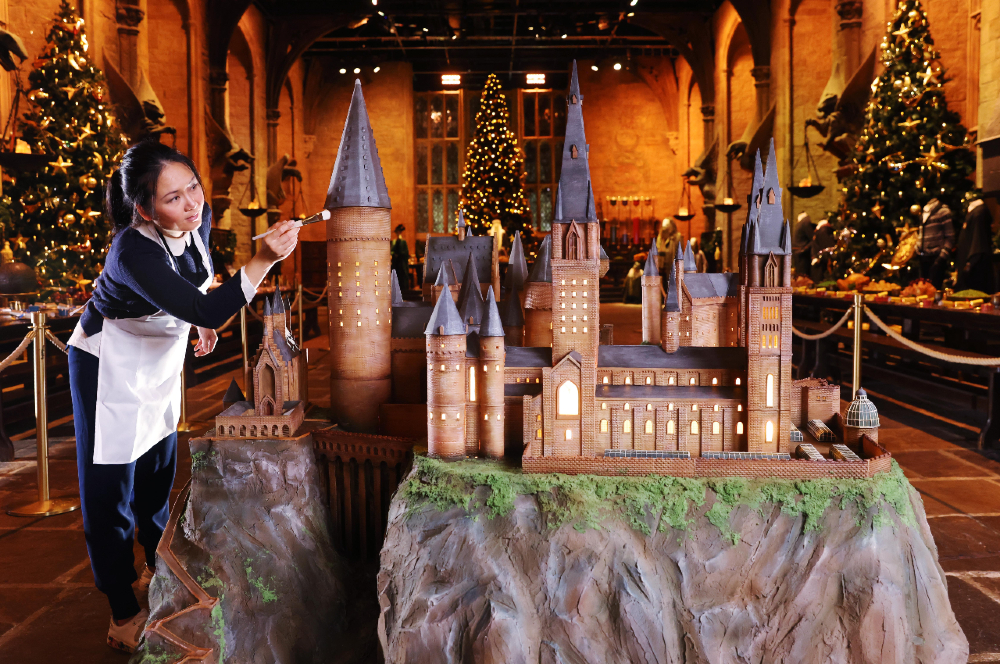 To celebrate the 20th anniversary of “Harry Potter and the Philosopher’s Stone” premiering, Michelle Wibowo was asked to make a Hogwarts cake. After planning the creation and spending more than 320 hours from conception to completion, the cake was finally ready.

“There could not be a more exciting assignment for a cake sculptor than to bring to life one of the most famous and magical structures ever imagined, so as a Harry Potter fan I leapt at the chance to bring Hogwarts to life in cake form,” Wibowo said. “This has undoubtedly been my biggest challenge yet and has involved many long days and late nights, but it’s been worth it to see the reaction today as the fans witnessed it for the first time and were served the first slices!”

Wibowo, from West Sussex, unveiled the cake to the delight of local fans. Many of whom arrived early to the Warner Bros. Studio Tour in London to experience The Making of Harry Potter. Those fans were able to enjoy slices at the very table the films where Harry, Hermione, Ron and c.o tucked into their own first meal at Hogwarts.

The finished cake stood at 1.5 meters (nearly 5 feet) tall and nearly 2 meters (6 1/2 feet) wide. When all said and done, the cake weighed about 220lbs and had a beautiful display of lights illuminating it from the inside. The special anniversary cake was made from vegan-friendly ingredients.

After the first few slices were served, the rest was donated to One Vision, a local charity dedicated to fighting food poverty. The cake was distributed to disadvantaged deserving families and individuals.

The official 20th anniversary of “Harry Potter and the Philosopher’s Stone” will be observed on November 16th, 2021. Make sure you pick up the special anniversary 4K release of the films to celebrate.