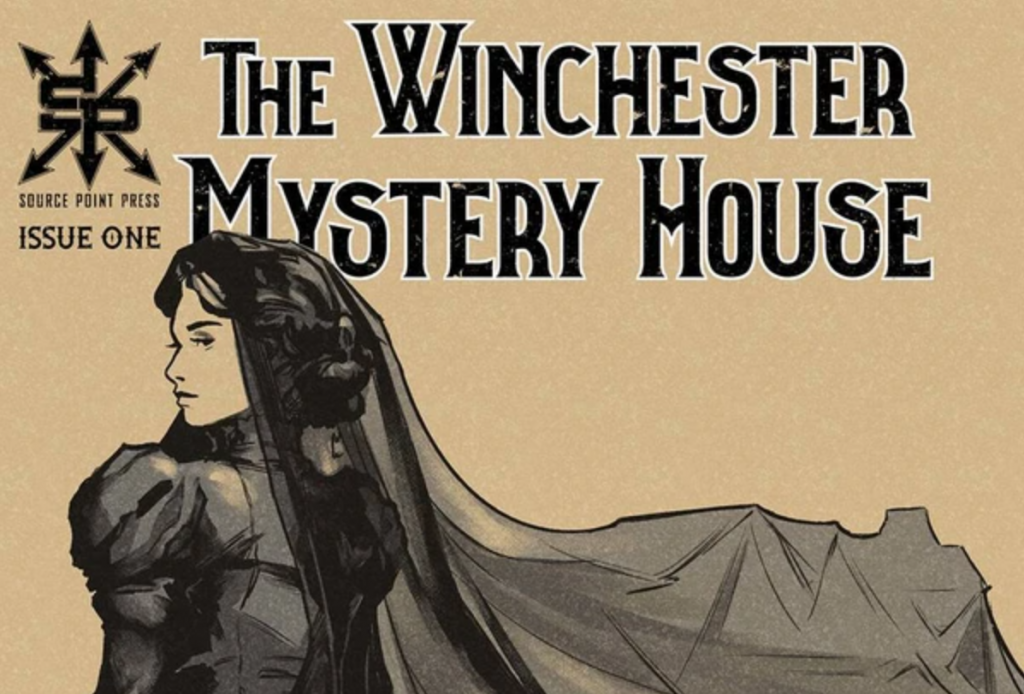 I picked the “Winchester Mystery House” comic this week along with the rest of my comic pull on a whim. I don’t tend to write about comics but this one in particular really caught my attention. If you know anything about the actual Winchester House then you’ll already be aware of some of the lore that comes with it. It’s the story of Sarah Winchester and her mission to keep building on the house for the soul’s of those taken by her late husband’s invention, the Winchester rifle.

This comic is written by Joshua Werner and based on the real life story of Mrs. Winchester. The tale is brought to life through the illustrations of Dustin Irvin.

Comic one is out and that’s where we begin with this review. The others are coming out in the near future and you can also purchase them on Source Point Press’ website. I wouldn’t be surprised if you find this in the gift shop at the Winchester Mystery House in the near future.

If you are unfamiliar with this story and love haunted places and ghosts then this comic is a great introduction to it. In it you familiarize yourself with the Winchester widow who made it her soul purpose to appease the ghosts of those lost to the rifle.

In history a psychic told her that she had this burden and they would continue to come after her for reparations. In order to keep them at bay she would have to find a home and build onto it forever.

This story is about her buying the house and land and her relationship to the workers involved. She would hire them indefinitely so that they could continue to build. Construction was never to be stopped as it would anger the spirits. A garden was also built for the souls to wander and plants were needed to keep it from view of others. She didn’t think it was anyone else’s business that she would keep building and wanted privacy while doing so.

The writing on this comic is purposefully eerie. You can see through the illustrations and the dialogue that it’s full of mystery and that Sarah was a very odd woman. An odd woman however with a purpose. The first room built is a séance room where she speaks to the spirits and then lets the builders know what to do next. And it was very important that she make it particularly so.

I’m not going to say that it’s so scary it will give you nightmares, jump scares aren’t really a thing with comic books. But it will put you in a headspace where things become a little more creepy similar to how a good psychological thriller does. This is a book that would be a great gift for those who are into the supernatural and history.

Pick up your copy here. We don’t make anything off of this review or the purchases made through that site. But we did want to highlight it because we thought it was so cool. Also if you have a local comic shop and a pull list this is a great one to add to it.