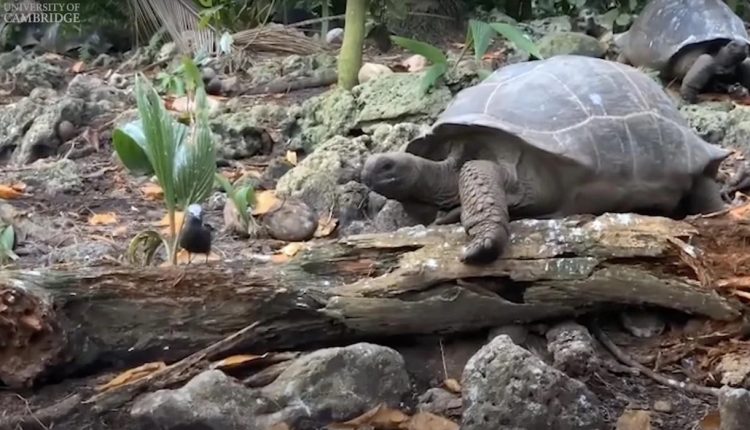 How Did This Giant Tortoise Manage to Kill then Eat a Bird?!

Thanks to the old fable about the Tortoise and the Hare, the shelled reptiles of both turtles and tortoises are not known for being quick and nimble. The only exception to this perhaps, is the Teenage Mutant Ninja Turtles, but that’s just common sense. How then, could a circumstance arise where a female Seychelles giant tortoise could manage to attack and eat a baby tern?

Why would an herbivore hunt down prey? Why didn’t the bird outrun the tortoise? All very good questions with some legitimately fascinating answers.

Let’s start with how it happened. There’s actually video of the hunt occurring, which is actually the first known captured footage showing a tortoise in the act of hunting a live animal. If you don’t think you can handle watching something like that happen, then I’d advise skipping past the video while we give a brief description of how it occurred.

Basically, a baby tern had fallen from the nest, unable to fly. It took up position on a small log where it was approached by the tortoise coming from the opposite end of said log. The bird tries to peck at the tortoise’s face, but the larger animal continues to pursue the tern to the end of the log. Once there, it patiently waits for an opportunity to extend its neck out, bite the bird on the head, and kill it.

Being too young to fly properly would explain why the bird was unable to take flight and elude the tortoise, but why didn’t it just hop off the log and run away? Well, this is where the bird’s survival instinct actually comes back to uh… bite it. Perhaps because of the bird’s age, or just lack of exposure to such a situation, the tern views the log as “safe” since that’s where a bird would normally be perched. The ground on the other hand is not safe, as that’s not where a bird is supposed to be; that’s where predators are. Effectively, the bird does not know how to handle this situation, backs up as far as it can on the log, and fails to escape from the tortoise.

So why would the tortoise attempt to hunt a bird anyway if its an herbivore? That question has some answers to it, but not as many as scientists would like to have. Biologist Justin Gerlach states that it’s not unheard of for herbivores to eat meat sometimes if it’s there. Dead animals can be picked apart by animals of all kinds, not just carnivores. Sometimes the proteins and amino acids in meat can be easier to break down then the cellulose in plants.

Obviously though, this bird was not already dead, so why would the tortoise go out of its way to risk injury to its face from the bird pecking at it when it could’ve easily obtained sustenance elsewhere? Did the tortoise know this bird couldn’t take flight? Its behavior suggests it has done his kind of hunting before. How frequently does it occur though and how widespread is predatory behavior amongst tortoises?

Clearly this isn’t something that would have immediate answers, which can be enthralling in its own kind of way. I mean, you expect this kind of behavior out of a ninja turtle, but a regular tortoise? Who would’ve guessed? My money’s on the reptile being taught by a giant mutated rat named Splinter. Don’t mess with Splinter.

Co-Creator of “Eastbound & Down” Ben Best has Passed Away

It’s “Another One Bites The Dust,” But With Pee Wee Herman