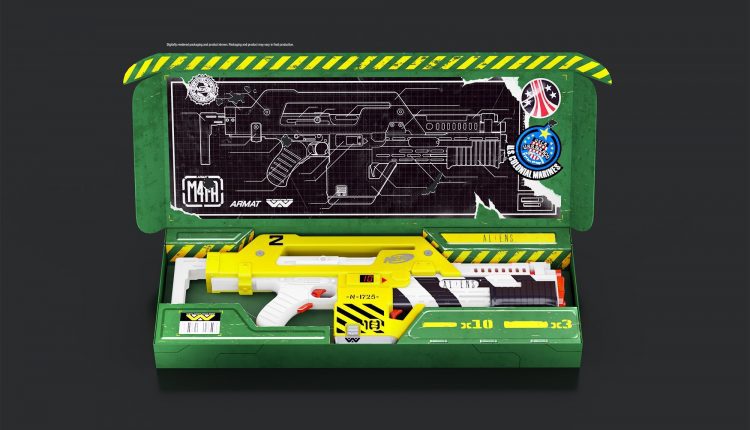 Get those Christmas lists ready early! Hasbro has launched the iconic M41A pulse rifle from the sci-fi classic “Aliens,” and it is everything fans of the franchise could ever want. The Nerf foam blaster recreates the iconic hand cannon in just about every way, sparing no detail and creating one of the best, functional replicas out there. While countless fans have tried (and succeeded in most cases) to build their own replicas from other Nerf guns and 3D printing, it seems Hasbro wants to deliver the complete package without mods.

The 28-inch rifle is unlike anything other nerf gun out there, including “The Mandalorian” and Soldier 76 “Overwatch” replica. For starters, the Pulse Rifle is a fully-automatic blaster that takes Nerf Elite-sized dart magazines from fan favorite RapidStrike. There is also a digital counter on the side that counts the darts as they fire, and can handle the onscreen accurate capacity of 99 darts! Oh, and if you’re wondering: yes, this bad boy also has a built in spring loader, secondary trigger grenade launcher in the under barrel that fires Nerf Mega Darts.

Replicas are nothing new for Hasbro and Nerf, with the aforementioned ones being big hits (and even bigger price tags, with the soldier 76 rifle topping out at $130). But rarely has one been this accurate and this detailed, sure to satisfy any fan of both Nerf guns and “Aliens.” With such a high magazine capacity, this is the perfect blaster for full on, Xenomorph nerf wars!

What a perfect way to celebrate the film’s 35th anniversary! Well, in 2022. Also, pick up the “Alien” quadrilogy box set, it’s WAY worth it.

Yes, I’m an adult, but I’m not above a good old fashioned nerf gun, especially one where I can shout, “Get away from her you bitch” as I fire it. Yes, I’m aware Ripley doesn’t say this holding the Pulse rifle, but you get the point.

This is incredible replica can be yours for just $95 and can be found for preorder at Hasbro Pulse and GameStop. The sites urge ordering by October 1st, 2021.

Once again, in unrelated news, my birthday is November 12th.

IKEA Releasing An Air Purifier That Doubles as a Side Table