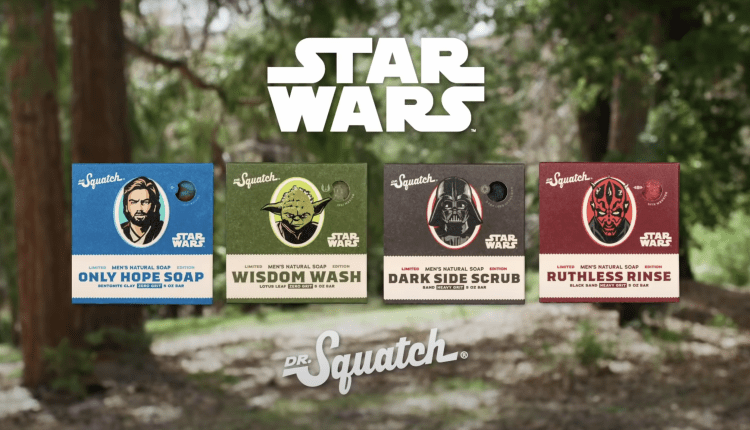 If you’ve been on the internet and watched anything on YouTube over the last year and a half, it’s highly likely you’ve stumbled across an advertisement for Dr. Squatch. They’ve developed a kind of advertising campaign that you can’t miss. Thanks to their ubiquitous presence and growing success, the soap and personal hygiene product company has secured a brand deal that will likely, force more of their products into some YouTube ads. That’s right, Dr. Squatch has entered the galaxy of “Star Wars.”

Even if you don’t recognize the name itself because you skipped through the ads, you probably recognize the magnificently bearded face of their spokescharacter, played by actor/comedian, James Schrader. His charismatic persona combined with the quirky, provocative, and often intentionally over the top writing of the commercials do quite a bit to push their all natural cleansing products into your mind. Now combine “Star Wars” with that and we have four different scents that cater to either Jedi or Sith.

From the Light Side of the Force, there’s Yoda’s Wisdom Wash soap with lotus leaves and an herbal scent. There’s also Obi-Wan’s Only Hope soap with thyme leaf and bentonite clay. It also has a brown and blue marble like color; as if Kenobi got his lightsaber tangled up in his cloak. Then from the Dark Side we have Vader’s Dark Side Scrub with chokeberry (because obviously) and exfoliating sand (it gets everywhere) as well as Darth Maul’s Ruthless Rinse with black sand and dragon fruit.

Having not used any of the soaps myself, I can’t testify to their fragrance or cleanliness, but I can say they remind of bars of fudge sold at a bakery I used to visit. Like what if that Only Hope soap was some kind of blue raspberry and caramel fudge bar? But I digress…

If their usual ads are a bit too much for you, then maybe this brand deal will be the thing to make you try their products. Maybe if Anakin had looked at sand as an exfoliant instead of an irritant, his path to the Dark Side never would’ve taken place. We’ll see if JJ Abrams decides to take that route if they ever start to do some “What If..” stories for “Star Wars.”