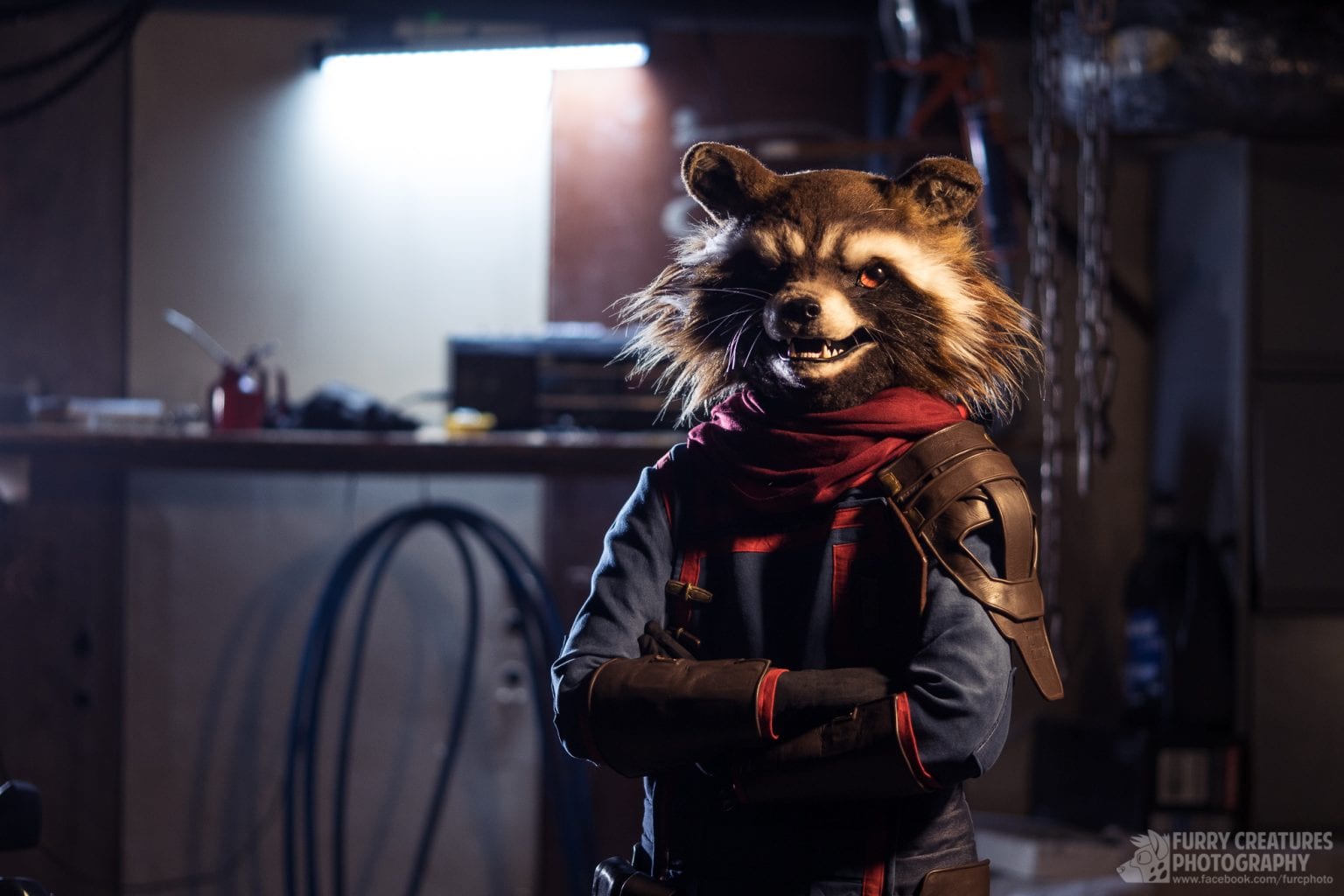 I remember seeing this photo go viral everywhere and wondered, who is the person under the suit? I’m happy to present Akela Taka, the cosplayer behind this phenomenal Rocket the Raccoon cosplay among many others!

Hi everyone! My artist name is Akela Taka and I have been cosplaying for over nine years. Besides being a cosplayer, I am an illustrator (hobbyist) and a scientist living in the Czech Republic.

Outside of cosplay, what do you enjoy doing?

I love playing video games, spending time with my family, caring for my dog. I’m also in love with all kinds of visual art; I make illustrations and paintings, mostly animals. I studied zoology and nowadays, I work as a scientist, studying human-animal relationships. Animals have also always been my greatest inspiration in art.

What first introduced you to cosplay?

Nine years ago, my friend dragged me with him to my first-ever con, which was AnimeFest in Brno (Czech Republic). At first I was skeptical, but eventually we were wearing over-priced, cheap-looking funny hats just to “fit in”. I immediately fell in love with cosplay and the community. Because I really loved Kingdom Hearts at that time, I decided to make my own cosplay for the next year.

I hoped not only to fit in better, but mainly to find other Kingdom Hearts fans and make some friends. While this franchise is very popular worldwide, in Czech Republic, there are only a few fans with no central base. My plan worked out well; I cosplayed as Aqua, found some KH fans, joined the Final Fantasy fan community, and had a really great time with everyone. And this is where it all could stop, because I never planned to make another costume.

You never planned to make another costume, what changed your mind?

The Aqua cosplay was a really “light” costume and only suitable for the warmest weather. I am very sensitive to cold and windy weather and it was quite uncomfortable to wear. Because of this, I decided that I could make ONE MORE cosplay – one that would be more comfortable and warm. I decided to make Lightning from Final Fantasy XIII (or Dissidia Duodecim, which I was playing at that time). Along the way, I also made Vincent Valentine (Final Fantasy: Dirge of Cerberus) cosplay for my friend.

With each costume, I started to feel more comfortable with crafting and with various crafting materials, and want to craft more. Just seeing an interesting character in a game/movie, etc., I start to think about how to create this particular prop. I love experimenting with new materials and ways to craft. And the creation process itself is my greatest reward. Nowadays, I have 16 finished costumes (and one scrapped that I never finished) ☺

What are the three most essential things to have with you when cosplaying at a convention?

This kind of changes with the type of cosplay I wear, but let me think. The MOST essential and universal “thing” to have is definitely a helper. Someone that will help you with the costume or with a bag. Who would take photos of you or handle payment at the shops if your hands (or vision) were unavailable. I always had my friends around and nowadays, we serve as helpers to each other with my husband.

When wearing a cosplay that requires make-up or body paint, it is essential to have said correctors. No matter how much careful you are, it always wears down during the con – especially when you are eating.

Third essential would be a handkerchief. Wearing contacts always make my eyes cry, but wearing masked cosplays require a handkerchief to control the amount of sweat on your forehead and cheeks.

How long does it take you to get into the Rocket Raccoon cosplay?

Rocket? Oh, he is quite a complex costume but still getting into him only takes about 15 minutes. “Fur suit” cosplays are amazing in this matter. You just put them on and you are ready! It can’t compare to make-up or body painting costumes, which may take even 2-3 hours to put on and sometimes also off.

How do you store your cosplays?

Up till recently, I only had “human” costumes, which included mostly clothing and some props. These I just fold into a bag (to keep everything together and ready for next action) and put into a closet. As for larger props, I hide them in corners of rooms or somewhere they do not stand in the way. One exception being my keyblades, which I cherish a lot and I display them hanging on my wall.

As for animal costumes – well, actually, I don’t know! I only started making animal (fur suit) heads recently. Right now, I have fur suit heads all around the place! But it gets a bit “overcrowded” here so I will have to buy some shelves to store the heads on. The tails are stored in a wardrobe as well as the main body suits.

Do you have any cleaning tips for cosplay with fur?

Actually, you should ask furries this question, I bet they have much more experience with this. I myself have not cleaned properly my fur suit cosplays yet, as unbelievable as this may sound. This is because due to COVID, I had no chance to wear the cosplays anywhere yet. My first and only appearance with a fur suit cosplay was early in 2020 Comic Con Prague with Scar. Ever since, all cons were cancelled so I am still waiting for my chance.

My fur suit heads are made with hard head bases (resin-like), which make cleaning the inside very convenient; I only disinfect the inside after each day on a convention. As for tails, paws, and other potential furry parts I make in the future, I believe cleaning will be easy as they will be hand-washable.

What is much more complicated is washing the actual clothing that has various props, buckles, and details attached.  To make it fully washable I always need to think through the creation process carefully so everything is removable and re-attachable. This alone is what makes [the costume making] much more difficult than it could be otherwise. With such a task, Velcro is your best friend!

Do you have any accomplishments you are particularly proud of?

Yes. Yes, I do. It’s the Rocket cosplay I recently finished. The reason is simple – it is the most complex cosplay that I built myself from top to bottom. Except for the guns, which were made by my husband. I had little confidence in making it – mainly for the sewing part and the overall body proportions. Both exceeded my own expectations and I am really proud of the result! I have learned a LOT during the process and because I highly overcame and extended my existing skills.

How to do go about preparing for future cosplays?

You know, cosplayers tend to have specializations. Some are good at sewing, some are good at making Worbla, foam armor, some excel at wig styling, makeup, etc. However, I tend to choose cosplays that are amazingly complex and difficult in terms of various crafting skills needed. Both Rocket and Wolf O’Donnell (which was my first fur suit cosplay ever) require many various skills. Including but not limited to fur suit-making, sewing, foam and/or resin props and armor making, leathercraft, and airbrushing.

I need to mention that while working on my old “human” cosplays, I usually commissioned a skilled seamstress to do the main clothing parts (e.g., Lightning’s coat or the Akatsuki coat). I only sewed some minor parts myself because I was never really good at sewing. My greatest strength in making cosplay was resin or modeling clay props. Later, I learned how to make fur suit heads. Although the Rocket head was my first and best accomplishment of its kind (my first realistic fur suit head), I did have confidence in making it, mainly because during the making process, I utilized my already good modeling skills. But I never believed I would be able to do the rest. I had minimum experience with making sewing patterns.

Everything I was doing was a learning process, mostly trial-and-error. It was not an easy task, because I tried to include change of body shape into the pattern. I would hide my female figure and lower the crotch to get closer to Rocket’s body shape). Actually, I have resewn the main clothing (the top and trousers) about eight times using old testing fabrics before I was satisfied with the pattern. The creation process was extremely long, re-doing many parts again and again. The whole costume took me nearly a year to finish. But it was so worth the effort in the end.

Which are your favorite three cosplays in your career?

Because of that, I would rather choose Scar as my third most favorite. He was my first finished fur suit-type cosplay and also this character has been my top favorite since childhood. So cosplaying as Scar felt amazing. Wolf O’Donnell was totally my first but I yet have to finish him.

How would you define cosplay?

Cosplay itself has a very wide meaning. The community itself divides into sub-divisions according to the type of cosplay everyone likes. For example, some people are happy to buy cheap cosplays and simply have fun with friends at a con. Others just like to show off their “natural beauty” by wearing a swimsuit (or nothing at all), a wig and post a lot of photos online. Some go to real extremes in craft making just to be the first in the next cosplay competition. I think that all of that is right as long as people have fun and respect each other.

However, for me, cosplay is mainly about true resemblance to the original character – about bringing the character to life. I am a stickler for detail, so I do go to extremes just to make an exact copy of a prop or something, even if it is such a small detail no one will ever notice. Still, I don’t really think cosplay is about all the details, sometimes it is, but some other time, you just need to grasp the essence of a character and make them believable. Make other people believe that this truly could be the character you are cosplaying. And ever since I learned how to make animal (fur suit) cosplays, I fell in love with it even more. Bringing an animal character to life (mostly a cartoon one) is a real challenge.

However, I would like to point out that I am not a furry. A lot of people see a fur suit cosplay and immediately classify me as a furry. I do have some things in common with furries; mainly fur suit-making and the love for toon animals. However, this culture has always been very distant to me and I feel there is a huge difference between cosplayers and furries.