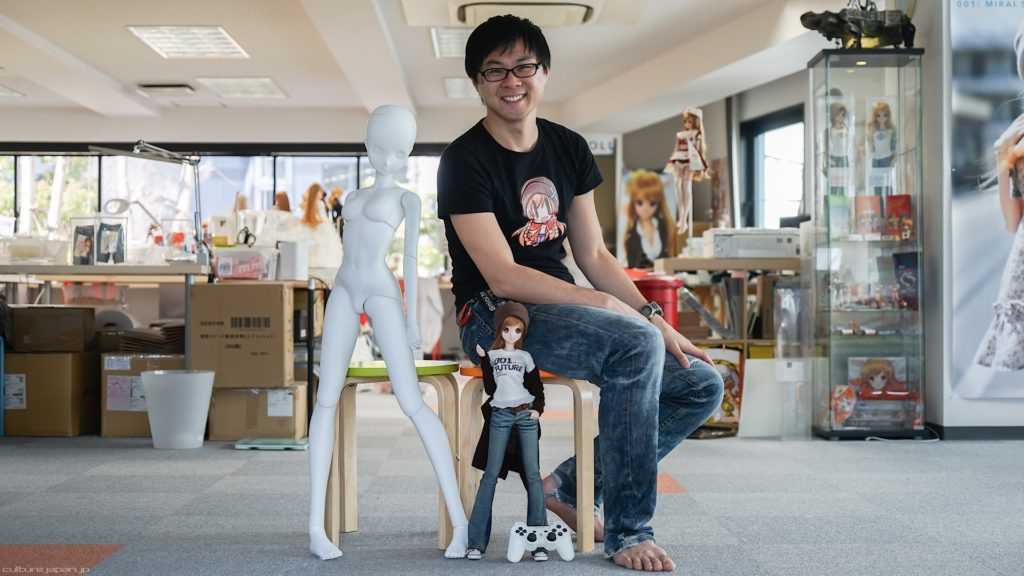 If I could chose one celebrity from the Anime Convention circuit to be considered for the title of “Renaissance Man,” Danny Choo would probably be one of the biggest contender.

“Born in the UK to Chinese Malaysian parents and currently residing in Tokyo since 1999, Danny Choo is the creator of a brand called Culture Japan which shares Japanese culture through in-house produced TV Shows, Character Content and a Fashion Doll known as Smart Doll.

Danny also writes about life in Japan as a foreigner on his blog and has been doing so regularly since 2004.”

He can also speak several languages including: English, Japanese, Mandarin, Cantonese, Korean. Danny speaks at conferences and universities in several different countries about Japanese Pop Culture and has been the host for Anime Expo and Anime Festival Asia.

What Danny is most known for, however, is the Smart Doll. He is the creator and developer of the fashion doll line called the Smart Doll. If you are unfamiliar with Smart Dolls, consider them a cross between a soft vinyl anime figure and an extremely high end barbie doll.

The doll is marketed for people who wanted an outlet for their love of fashion, Japanese culture and anime. You can buy an originally designed doll, or one made to resemble an existing anime character, and dress them up in outfits. These dolls are so high fashion that Danny’s father, the famous Jimmy Choo, designs the shoes they wear.

I had the rare opportunity to interview him one on one, and be able to ask him some questions. Being able to talk with him one on one was definitely an honor.

Shelby:  Going off the the success of your previous dolls, do you have any plans for the your future projects?

Danny: So um our company has lots in store. It’s very important to continue to innovate some of the products, and so in Q1 of next year we’ve got dolls which are double the size of this. They’re like 120cm tall. They’re going to be made of the same material. They look pretty much the same, just double the size. We do lots of licensed products as well. So we’ve got Code Geass. We’ve got a license to do all the Code Geass characters, we won’t do all the Code Geass characters. We’ll do the main ones.

Shelby: I am a fan of your Japan Video Diaries, do you have any more in the future planned?

Danny: Yes, I’ve got this TV show called Culture Japan. We’ve done two seasons. We plan to do a third season and are starting to film in January. Hopefully, that should be ready by March.

Shelby: I read in an interview that a lot of the things you make are to spread knowledge of Japan across the world, what would you like to educate people on?

Danny: I think, for people who haven’t been to Japan I think that it would be good for people to travel to Japan at least once in their lives. When people think of going on holiday, people think of New York or Thailand or London, but when something is in Japan people reply “Japan, why Japan?” I think it’s a very unique country. Things are very organized and things run like clockwork. Tokyo is very chaotic, but it’s a long-lasting impression.

Danny: I like Code Geass, I was very pleased that I got the license to make my hero, Lelouch. He was my hero, he got rid of people who did the bad things. I agree with that. Also Death Note. Kira because he got rid of bad things as well. Yeah, bad people are, not so nice. Those are two particular anime titles that I’ve always loved. I do love the old Ghibli movies and watch them time and time again. Especially Kiki’s Delivery Service.

Shelby: You’ve been to conventions all over the world, do you have any favorite memories?

Danny: I think all of the conventions I’ve been to are, they’re all about Japanese culture but they’re unique in the way that the folks who attend, most don’t get to travel a lot. By me attending these events, I get to meet a lot of my fans and it means a lot to me. In that respect, each and every one to me would be very unique.

Are you a fan of Danny’s work? Let Nerdbot know in the comments!