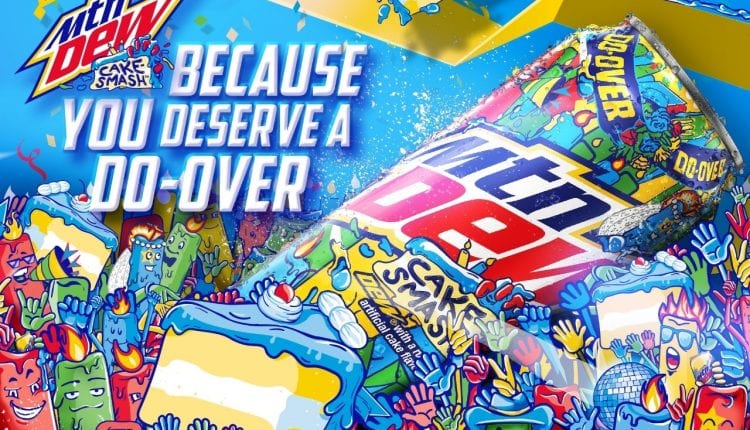 MTN DEW had a big milestone birthday in the midst of last year’s chaos. Now, they’re bringing in a brand new flavor to their line up to shake off those missed-party blues. After weeks of circulating product designs, the Dew is getting ready to drop their long rumored Cake-Smash soda.

You’ve heard of Mountain Dew flavored cake, now get ready for cake flavored MTN DEW! Two years ago, PepsiCo trademarked the name “MTN DEW 80s Cake-Smash” with the intent of releasing the flavor to commemorate the 80th anniversary of the original MTN DEW Formula. Unfortunately, due to a certain major global event, the plans for release had to be shelved until further notice. The anniversary passed without any major fanfare and now, MTN DEW is giving fans a do-over– or should we say– “Dew Over” event!

That’s right– MTN DEW is launching the do-over sweepstakes as a celebration of all things missed during the COVID pandemic lockdowns that took place last year. Starting promptly, MTN DEW is asking fans to tweet the official @MountainDew with their funniest “party fail” stories. These entail any of the creative ways that people managed to celebrate birthdays, milestones, anniversaries, or any other personal achievements that occurred over the past year. MTN DEW also requests that in addition to tweeting the official account, fans include the hashtags #DEWDoOver and #Sweepstakes in their tweets.

Fans who participate in the sweepstakes will be entered to win two cans of MTN Dew Cake-Smash. Of the contestants, a very lucky three will be chosen to win not only their two cans of Cake-Smash, but also a cash prize of $1,000 to use as part of their “DEW Over Party Fund”! As of right now, there are no plans to further release this special edition flavor. If you’re interested in having a shot at trying it yourself, you’ve got to participate in the contest, so get to tweeting!

The DEW Do Over Sweepstakes will be available for entry until July 2, 2021.

Elephant Busts Through Kitchen Wall In Search of Snacks