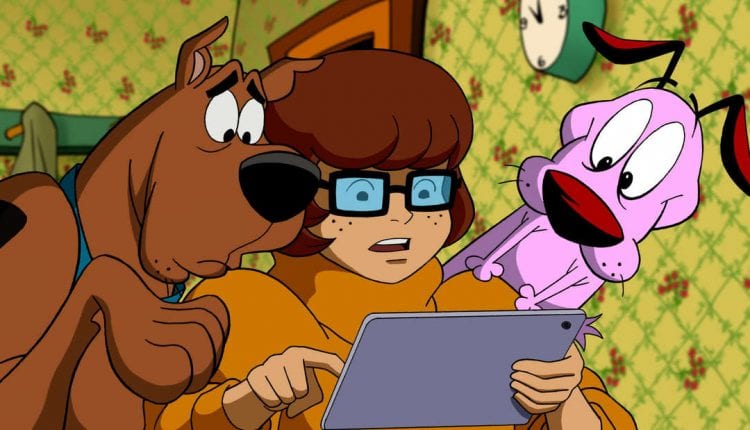 The crossover that cartoon fans have always dreamed about but could never have imagined would actually happen is here! Scooby-Doo and Courage the Cowardly Dog are coming together in a chaotic comedy horror crossover movie set to be released in September of this year!

SYFY WIRE announced the news this morning that the two canine juggernauts of animated horror will be coming together in an all new movie, “Straight Outta Nowhere: Scooby-Doo meets Courage the Cowardly Dog.” The film, written by Mike Ryan, follows Mystery Inc as they find themselves trailing a bizarre object that leads them straight to the middle of Nowhere, Kansas. The home of Courage and his humans, Muriel and Eustace Bagge, Nowhere is a hotspot for bizarre and sometimes nigh apocalyptic supernatural happenings. Here, Scooby and The Gang find themselves face to face with a massive cicada monster and her winged insect posse. Can Courage and Scooby-Doo come together to overcome their fears and save the day?

The Scooby-Doo franchise recently celebrated its 50th anniversary, and is far from unfamiliar with the concept of out-of-this-world crossovers. Courage the Cowardly Dog is coming up on the 20th anniversary of its final episode, although attempts toward reboots and revivals of the series have been abundant. This special marks the first time ever that the two anxiety-ridden canines have ever appeared on screen together, and the first time in decades that Courage has appeared in an American release. “[The film] is definitely going to trigger acute nostalgia for those of us who grew up watching both Scooby-Doo and Courage shows, and it will also bring these wonderful characters to a new generation of viewers,” states Cecilia Aranovich, the director and producer of the project.

With a run time of 72 minutes, Straight Outta Nowhere: Scooby-Doo meets Courage the Cowardly Dog is set to release on Digital (price pending) and DVD (14.99USD) on Tuesday, September 14th, 2021.

“Loki” Episode 2 Continues to Prove that Mischief is Magic [review]