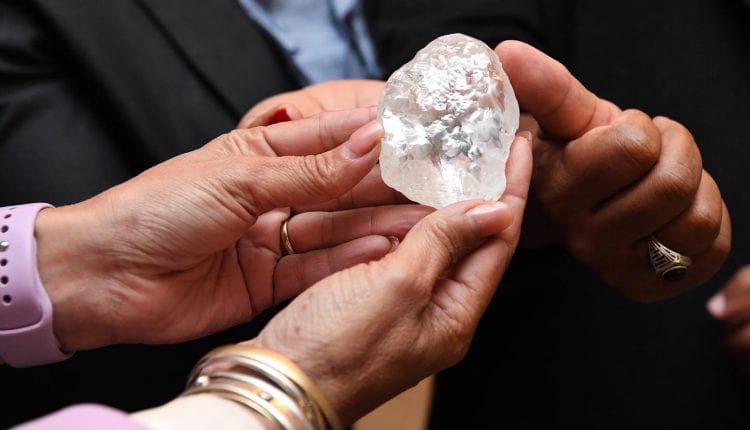 Diamond Found in Botswana May be World’s 3rd Largest

Sure Botswana might have one of the world’s largest salt pans. It may even be extremely nature-friendly since about 38% of its land is protected as national parks, sanctuaries, reserves and the like. But did you know Botswana is the world’s second largest producer of diamonds? It’s true, Botswana has produced over 728 million carats of rough diamonds since mining began back in 1972.

Well, Botswana has struck gold again, or should I say diamond. Debswana, a mining company owned by the Botswanan government and the De Beers Group, has unearthed a massive gemstone weighing 1,098.3 carats. The enormous diamond is 73 millimeters long, 52 millimeters wide and 27 millimeters thick.

While to some this might not be significant news, it is to Botswana. With their economy dwindling because of the COVID-19 pandemic, they hope that this will help strengthen their economy to where it was prior to 2020. Especially since diamonds account for about two-thirds of Botswana’s export earnings.

This would make it the world’s third largest, behind the 3,106-carat Cullinan Diamond found in South Africa in 1905, and the 1,109-carat Lesedi La Rona diamond discoverd in Botsawana in 2015. The Cullinan was paired down into smaller stones that adorn the British Royal Family’s Crown Jewels. The Lesedi La Rona sold to British jeweler Graff for $53 million back in 2017.

But how does this one measure up to the famous Baseball Diamond from “The Great Muppet Caper?!”

Father’s Day Gift Ideas For Dads Across the Galaxy