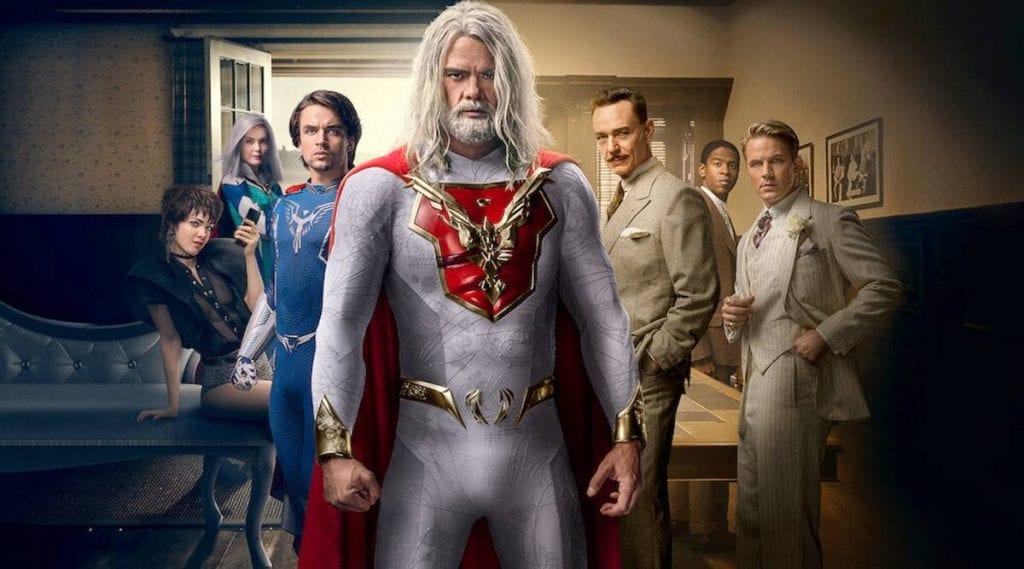 “Jupiter’s Legacy” is Another Victim of Common Netflix Mistakes [Review]

I’ll be honest, I had no intention of reviewing Netflix’ “Jupiter’s Legacy.” I was hoping to watch it for two reasons. One, because I had 4 people recommend it to me in a single week and two, the longer I can fend off watching “A Thousand Words” with Eddie Murphy for this week’s Rated 10% or Less article the better. Granted, I’ve backed myself into a corner. As my week comes to an inevitable end….but that’s a different article.

After completing “Jupiter’s Legacy,” it seems to be yet another victim of the Netflix paradox; their inability to assign adequate episodes (either too many or too few), and not focus on the right things to keep the show engaging while also churning out series after series. Rather than focus on the series itself, let’s look at the common mistakes that plague a majority of Netflix original series, and how “Jupiter’s Legacy” commits just about every single one of them.

“Jupiter’s Legacy” isn’t a bad show, merely an average one that suffers from being overstuffed and tonally imbalanced in an overcrowded genre.

The first Netflix series mistake that plagues “Jupiter’s Legacy” is the non-linear storytelling mechanic the streaming powerhouse insists on implementing into as many shows as possible. That’s not to say that the series is hard to follow- it’s not. It simply doesn’t benefit from telling two different stories in two different timelines across every single episode.

This would be fine if each arc was crucial to understanding the other, and we get an episode where both the past and the present collide. But “Jupiter’s Legacy” opts to dedicate half its time meandering in the 1920s to show us how all of main characters got their powers and the other half to the older generation already fractured dealing with a younger generation. The problem here is that what isn’t covered in the past is so integral to what is happening in the present that both end up feeling like two completely different shows loosely connected by the same characters showing up in both. Our main characters don’t even get their powers, form the Union of Justice, and set up their code that is the narrative catalyst for everything happening until the last episode, which would be fine if there wasn’t 90 years of questions that have a far greater influence on current events.

“Jupiter’s Legacy” chooses to infer that big, life altering events happened off screen and we are told through familiar characters and unfamiliar ones, too. There is a massive amount of world accepting rather than world building. Viewers are expected to just assume that this is a world that has superheroes with powers and how they got them isn’t really that important. Except, it IS important because the entire arc in the past is exactly that hero’s journey. This begs the question of why? Why the hell are there so many super heroes in “Jupiter’s Legacy?” We’re suppose to believe that our six protagonists (and unseen antagonists) are worthy after undergoing a series of test on a mysterious island, their children inherit their powers regardless of that worth, AND countless superheroes and supervillians all have powers, because? It just doesn’t make sense, and I don’t need anyone to dumb it down for me, just don’t go out of your way to sell me one premise only to disregard it altogether with another. And this is why the non-linear story telling actually hurts. It doesn’t ask the right questions, and the ones it answers aren’t the ones the viewers asked in the first place.

The second Netflix series mistake that “Jupiter’s Legacy” commits is too many characters and subplots. This is something that has plagued countless shows for Netflix particularly in the superhero and fantasy genre. Things like “Warrior Nun” and “Cursed” are prime examples of shows that overstuff their character roster without much care or concern for how they fit into the overall narrative. “Jupiter’s Legacy” does this as well, constantly introducing new characters and subplots to the point of exhaustion. This fails to give viewers a better understanding of the characters we know to constantly have to update the list with characters we don’t. It also pushes key characters and major plot points out from the center to make way for these one offs and extras that just simply aren’t needed.

A prime example of this is with the relationship between Sheldon aka The Utopian (Josh Duhamel) and his son Brandon aka Paragon (Andrew Horton). After Brandon breaks the code by killing a clone of Blackstar to save his father, it sets of a series of events that put the code and the family at odds. Brandon is relegated to the farm to mull over what he’s done, and Sheldon begins being questioned by everyone around him who are beginning to believe that the code itself is no longer relevant. This is a major plot point that serves a key narrative component not just for how the show continues in the present, but also how the entire series ends. It is what drives both Sheldon and Brandon apart, and begins tearing the entire family from the inside out. All of this is not only important, but is also a huge part of the final reveal and the real villain’s primary motivations. Naturally, this should be the main thing we watch unfold, but we don’t. Brandon is maybe in 3 out of the 8 episodes, with series choosing to focus on just about everyone else you can imagine.

The subplots and teenage angst and drama that truthfully starts to feel a lot like a CW show all get way more screen time that anyone else that should, leaving the final reveal to feel really lackluster and bring up far more questions than answers. I don’t need everything spelled out for me, but this show seems uninterested in unfolding the plots that matter, and relegates main characters to extras in their own stories. I know more about Nick of Time (Franco Lo Presti), who is nothing more than one night stand in single episode than I do about Brandon and Brandon and Sheldon’s relationship. This is a common mistake that plagues numerous Netflix series in this particular genre, and it makes the show more frustrating than enjoyable. We simply spend too much time with people and plots that don’t matter and not enough time developing the ones that are narrative lynchpins of the entire show.

The last Netflix series mistake that plagues “Jupiter’s Legacy” is with its number of episodes. This seems to be something Netflix consistently struggles with, either doing one too many episodes where the show feels like it’s dragging or not doing enough episodes to really flesh out the stories being told. I’m not entirely sure which one this show would benefit from. What happens in the series either spends too much time on subplots and arcs that simply don’t matter in the end, or it doesn’t have enough room to breath to really flesh out the main story, leaving the ending feeling rather abrupt and sudden. Be it more or less episodes, 8 is not the magic number for “Jupiter’s Legacy.”

I literally had a “wait, that’s the end?” moment at its conclusion, rather than a “but I want more!” moment. Netflix really just can’t seem to get it right, and this new series is no different than countless others.

All in all, “Jupiter’s Legacy” is a victim of Netflix, committing unforgivable mistakes that make it hard to enjoy. These mistakes just leave too many questions unanswered, leaving massive gaps in the story that would be far better served as being what the show is about instead of the arcs that are chosen to be told here. Why are there so many superheroes? Why do all of them have children and no significant other? Why are all the children estranged? What happened in the fallout between George and the rest of the Union? What happened to Richard and how did Hutch get his magic rod (giggles…grow up!)? How the hell did Blackstar get an antimatter heart? How did the main villain clone him? Why does Walter have a daughter in Tokyo? Where did all these young members of the Union of Justice come from? What the hell happened in the 90 years since they got their powers to now?

None of these questions are answered and yet all of them play an integral part of the overall story. “Jupiter’s Legacy” simply doesn’t pick the right stories to tell, and the Netflix mistakes it makes cannot be overlooked.

“Jupiter’s Legacy” is really just ok, and in a very, VERY crowded genre that’s kind of the worst case scenario. Superhero series can’t afford to be anything less than great at this point, and it misses the mark on many of the shots it takes.

Like “Jupiter’s Legacy,” Netflix needs to update its own code. Season 1 is streaming now.