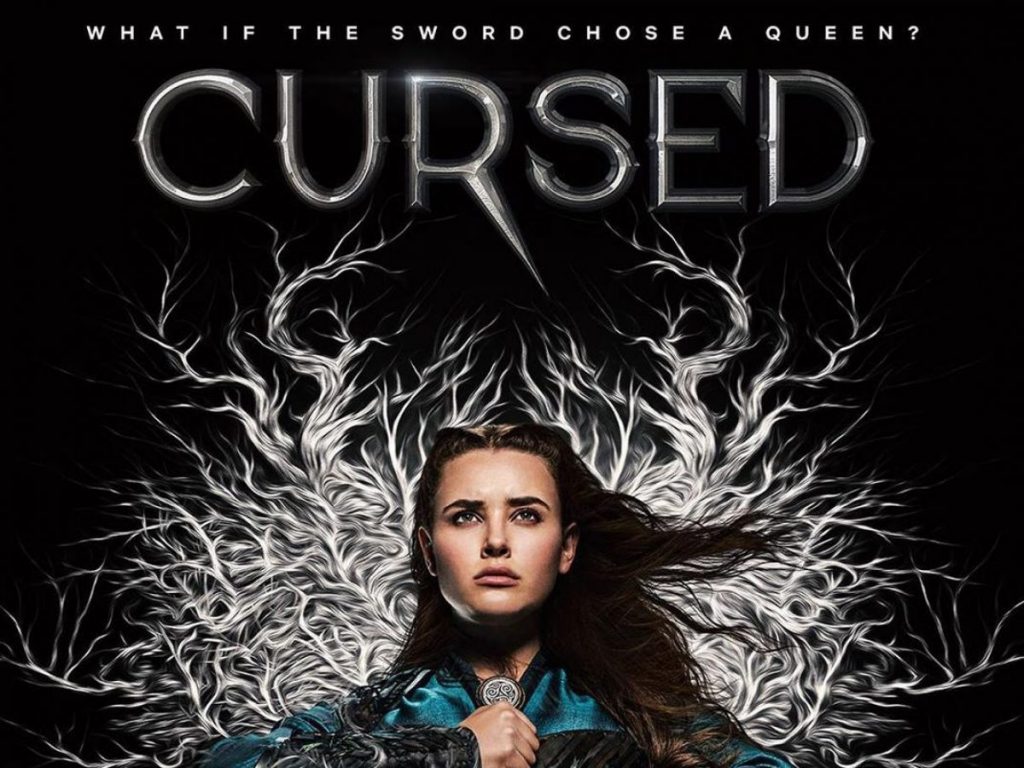 Netflix has taken this strange time to capitalize on new content, with “Cursed” being yet another big budget original released in the last few months. Banking on viewer’s inability to leave their homes, Netflix continues to waste no time in providing weekly, bingeable content.

Unfortunately, they seem to being striking out more than striking gold. While visually stunning, many of their new shows seem to commit the same mistakes. “Cursed” is no different, succeeding in visuals but failing in competent storytelling. It is another storytelling misfire for Netflix, one that again proves a pretty show doesn’t make a good one.

Based on the illustrated novel by Frank Miller and Thomas Wheeler (and created for television by the same pair), “Cursed” follows a witch by the name of Nimue (Katherine Langford) who has been chosen as a Summoner by the hidden elders and charged with the task of delivering a powerful sword to Merlin (“Vikings” star Gustaf Skarsgärd, proving there are too many Skarsgärds in Hollywood).

It is a reimagining of the King Arthur legend, seeking to tell the unknown story of his humble beginnings and the powerful individuals that led to his eventual legend and rule. The journey is perilous as Nimue is pursued by the religious zealots known as the Red Paladins, who hope to claim the sword to put the church in total power.

Despite its vast story differences, it’s hard not to compare it to Netflix’ other series “Warrior Nun.” Many, if not all of the writing and storytelling mistakes (review here) are made, resulting in both shows being more similar than they should be.

There seems to be a strange aversion to linear storytelling. In their attempt to fill a 10-episode arc with rich story, both “Cursed” and “Warrior Nun” choose to overcomplicate everything with subplots and characters. The show seems more concerned with stacking subplot after subplot onto a never ending stream of new characters with little to no regard for the characters themselves.

Like similar shows, “Cursed” attempts a Tarantino-style beginning for its first few episodes, leading to confusion and muddled story development. Then, after its midway point, it self corrects and takes a more linear approach. This leaves viewers with more questions than answers, more subplots without a payoff or importance, and a general lack of interest to see the shows’ conclusion.

There are so many characters here it’s hard to keep track. Every episodes adds another one, causing viewers to utter out loud “who is this, now?” on more than one occasion. The show constantly shifts from Nimue to Meriln to Arthur (Devon Terrell) and many more that may or may not turn out to be part of the larger narrative.

By Episode 5, there are least 9 supporting characters that are introduced, given little to no introduction, then whisked away as fast as they appeared.

Viewers are suppose to take note and remember them for later, but the constant stream of names without purpose takes its toll. For example, The Ice King opens episode 4 with no previous mention or story, and then doesn’t show up again until at least 3 episodes later. He is suppose to be the overall impending antagonist who will set the entire kingdom into a great war. But like so many other characters, the writers can’t seem to figure out how to make him important until they start tying knots towards their conclusions.

“Cursed” wants to be the “Game of Thrones” of the King Arthur tale, but fails to capture the subversion of its source material. While the visuals are terrific and the performances are solid. Particularly Langford and Skarsgärd- who looks and acts more like a young, low rent Christian Bale– they can’t make up for the writing traps that are set for them.

Again much like “Warrior Nun,” if everyone and everything is important, eventually nothing is. What’s most frustrating is that these follies are easily correctable. With a more focused and linear story, the writers could spend more time developing the characters that matter, adding much more emotional impact to their journeys. Instead, they opt for a sprawling narrative that never seems to get to its point. What’s left is a visually stunning, well acted mess. If the goal was to be “Game of Thrones” it’s better to be season 1 rather than season 7. Unfortunately, “Cursed” feels like the latter.

I truly hate having to make these comparisons, but like”Warrior Nun,” and for better or worse “The Old Guard,” there is a good show in here somewhere. The concept and premise of its reimagining are interesting, strong enough to see it in your queue and want to give it a go. Sadly, all of them miss their mark in the writing, turning a great premise into another poorly executed show.

This show is not as compelling as it should be, and is rather easy to turn off after a few episodes. The King Arthur Legend has been reimagined time and time again, and for those hoping for something new and unique, “Cursed” will ultimately leave you disappointed and missing more simple (and maybe Disney) interpretations.

You can watch season 1 on Netflix right now.