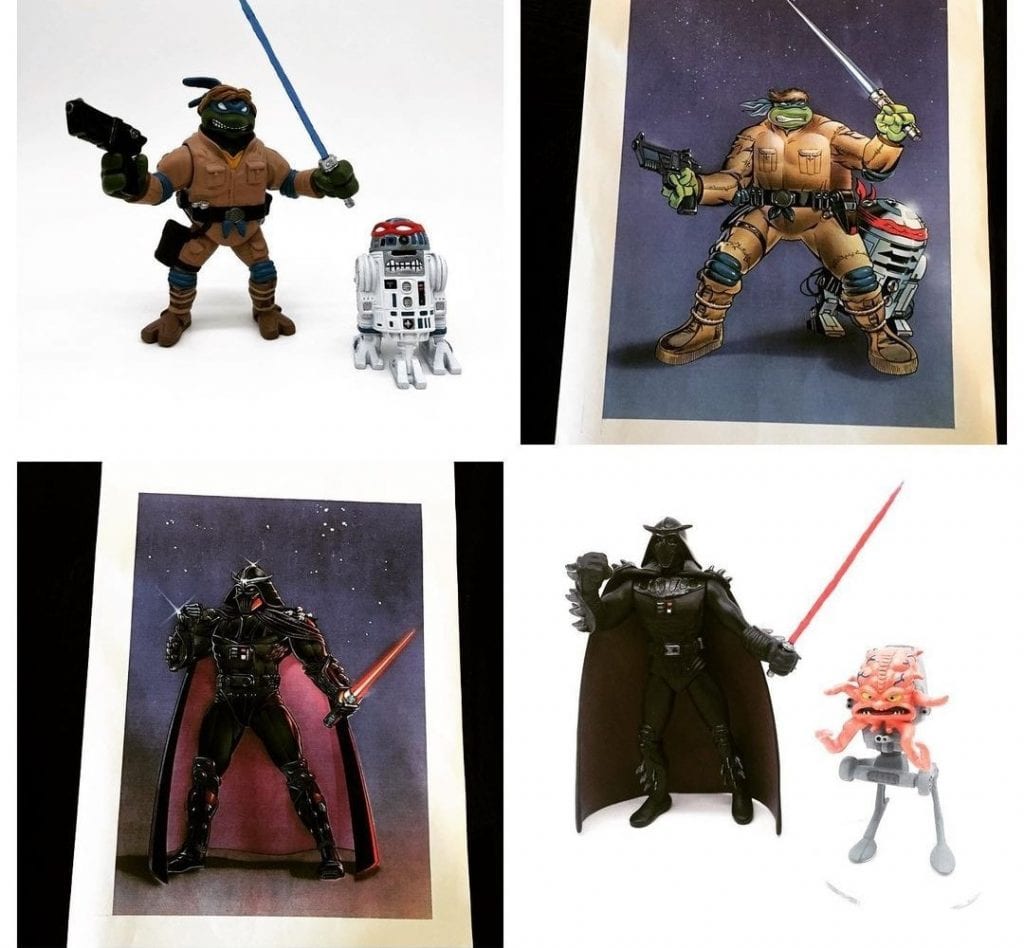 In the world of action figures, there were few things more popular in the late 80s and early 90s than “Teenage Mutant Ninja Turtles.” Thanks to the popularity of the 1987 animated series, seemingly every kid had a few of them. A decade prior to that, the hot ticket items were the original line of Kenner “Star Wars” figures. Now imagine what would happen if someone tried to combine those worlds together in a bizarre Dr. Moreau-like fashion.

Avid toy aficionado and member of WB Games Alan Johnson posted some pieces of artwork that apparently came from a proposal to merge “Star Wars” and “Teenage Mutant Ninja Turtles” characters into a new set of action figures. According to Johnson, this would’ve taken place around 1991 after Kenner allowed the licensing rights to lapse. Worth noting is that this is around the time when Kenner was being purchased from its then owner, Tonka, by Hasbro. Maybe the companies had other things on their mind outside of renewing a “Star Wars” license, something that would be absurd to say these days.

Meanwhile, in 1988, Playmates Toys had found incredible success with its line of “Teenage Mutant Ninja Turtles” action figures. Even though the “Star Wars” franchise was in a bit of a lull by the time of the late 80s and early 90s, the franchise was still popular enough to where Playmates apparently was making a pitch to whoever was in charge of licensing rights over at Lucasfilm. The hope would’ve been to secure the rights to make “Star Wars” figures and add another multi-million dollar franchise to the Playmates toy roster.

Depending on the exact timing, this could’ve been very lucrative too. In 1991, around the time Johnson states the action figure license lapsed, Bantam books would publish Timothy Zahn‘s “Star Wars: Heir to the Empire” novel and Dark Horse Comics would release the series “Dark Empire.” Outside of video games, these were the first big new pieces of media for the franchise in years, and helped keep the series going until the “Shadows of the Empire” multi-media event in 1996, the theatrical re-releases in 1997, and the prequel trilogy in 1999.

Alas, Playmates did not acquire the rights and the idea of Leo Skywalker, Don-3PO, Raph2-D2, Chewlangelo, April O’Gana and Darth Shredder will be lost to time and concept sketches.

That being said, the drawings from “TMNT” artist Michael Dooney are pretty fantastic, predating Deviantart by about two decades. And let’s face it, combining Shredder with Darth Vader seems like something that was always meant to be anyway, doesn’t it?