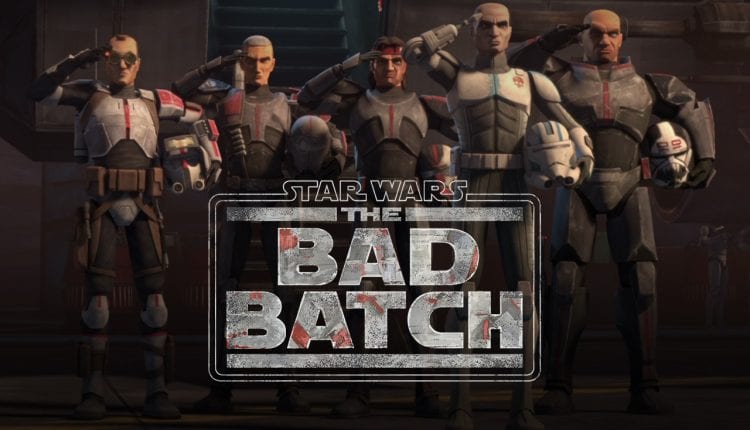 Disney+’s new “The Bad Batch” series makes good on just about every promise we didn’t know was made to us as viewers and Star Wars fans. They are everything we could ask for and more, capitalizing on a longing to continue the acclaimed animated series without stretching it beyond its narrative means. It’s literally like “The Teenage Mutant Ninja Turtles” meets “Star Wars,” and I can’t imagine a better combination of nerdom. “The Bad Batch” fills the animated void you didn’t know you had, and triumphantly transports Star Wars fans back into the galaxy far, far away without feeling forced or tired. Yes, “The Bad Batch” is THAT good.

Of course “The Bad Batch” series is the brain child of and championed by Dave Filioni, the Star Wars Universe unsung hero who essentially restores all that is good in this world every time he breaths on a new Star Wars project. It operates as a spin off series of “The Clone Wars,” focusing on a group of clones introduced in the series’ final season. “The Bad Batch” focuses on a group of clones who aren’t like the rest, with defects that define their strong personalities. While they were used as clean up crew for the Empire during the Clone Wars, after the execution of order 66, the clones do not have the inhibitor chip that makes them obedient like their counterparts. Obviously, when Order 66 goes into effect, the misfit clones are as confused and displaced as the surviving Jedi and rebels, and in turn become hunted by the empire and forced to use their skills to survive in a tumultuous time.

The first thing you need to know about “The Bad Batch” is basically everything about “The Clone Wars.” This is both the shows strength and weakness, as it is inexplicably tied to the events of first 7 season of a show you may or may not have watched. While you can probably still enjoy “The Bad Batch” with minimal knowledge of the galaxy, it most certainly will not have the same impact as it would for someone who watched all of “The Clone Wars” and is very familiar with the Star Wars lore. This is both a gift and a curse, as “The Bad Batch” is a gift to those who delved deep into its predecessor but my very well be inaccessible to viewers who didn’t binge the previous series. As the former, “The Bad Batch” does well to place these characters firmly in events that we are already versed in how they took place and cement them as canon with minimal effort. Likewise, the creators of “The Bad Batch” never dumbs down the narrative. They dig their toes in the sand and force viewers to recognize and familiarize themselves with everything that came before it.

I can’t stress this enough: do NOT come into “The Bad Batch” without at least the most basic framework of knowledge of Star Wars. You will absolutely be lost, as the new series never once tries to reintroduce the galaxy to anyone knew. “The Bad Batch” is for better or worse a show FOR “Clone Wars” fans by “Clone Wars” fans. It borders on feeling like “The Clones Wars” season 8 rather than its own, individual show. That’s not to say “The Bad Batch isn’t unique, but rather to emphasis just how tied the show is to all the narratives that came before it. Personally, I believe this is the smarter choice, as it the show can immediately let the characters breath their own, distinct, charismatic life without having to spend the entire first episode retelling old stories. We can just hit the ground running with this rag tag group of interesting and unique clones, and that plays to the strength of their origin as well as enhances the compelling nature of “The Bad Batch” first episode.

While some may view this “I assume you know everything” approach to a new series as a detriment, I believe this is what gives “The Bad Batch” its’ perfect niche existence. Yes, the show is more “The Clone Wars” season 8 than its own, individual thing. Which would be a problem if Star Wars needed any new fans. But it doesn’t, and really never will again. “The Bad Batch” is a gift to those of us that can’t get enough of Star Wars animation, not a cash grab to capitalize on the one lone person that somehow does know or like Star Wars. “The Bad Batch” is the FUBU of Star Wars; For Us By Us of animated diehards, desperately wanting more from perhaps the best expanded Star Wars series in existence. Additionally, “The Bad Batch” is yet another example of just how much there still is left to explore in the galaxy, and it’s a journey I intend to see through to the end, however long I hope that may be.

If you’re a fan of Star Wars and “The Clone Wars,” “The Bad Batch” is for you. It whisks us back into the world we didn’t even think we missed until these misfits show up and wreak havoc on the empire. The first episode proves that there is still a lot to learn about Star Wars, and gleefully expands the universe beyond the Skywalkers, something the lore has often struggled with in their film iterations. “The Bad Batch” is good fun for those who in the know and those who can’t get enough of Star Wars animation. It delivers on everything we didn’t even know was promised, and sets up a whole new world of adventures with a very interesting cast of characters.

“The Bad Batch” is great, and if it makes you watch “The Clone Wars” for the first time, that’s a win, too.

Sign up to Receive the NERDBOT News!
[tipjarwp]
disney plus star warsMay the 4thmay the fourth be with youReviewStar WarsThe Bad Batch Star Wars
Share

The Weather Channel Does May The 4th with “Star Wars” Forecasts