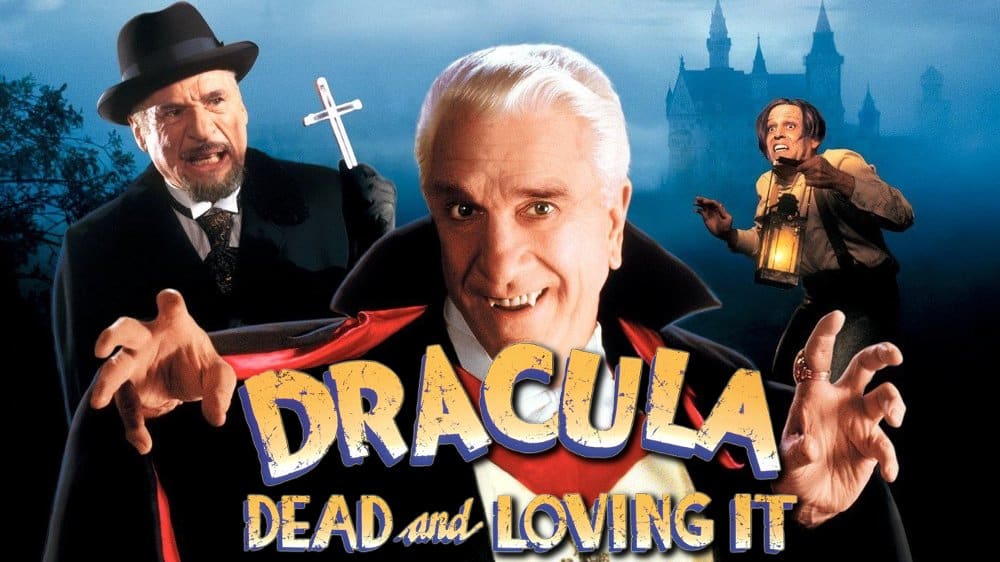 “Dracula: Dead and Loving It” Turns 25 This Month

I’m going to be very clear up front and tell you that it is with a heavy heart that I write this next sentence. “Dracula: Dead and Loving It” is really, really bad.

I had fond memories of the film going into it, I really wanted to like it as much now as I did 25 years ago, and it’s from a director who is arguably one of the most influential comedic filmmakers of our generation. But when compared to films like “Spaceballs,” “Blazing Saddles,” and yes, even “Robin Hood: Men in Tights,” there’s a reason you’ve long since forgot “Dracula: Dead and Loving It” is not only a Mel Brooks film, but that it even existed at all. Lacking the memorable wit and social commentary of many its predecessors, “Dracula: Dead and Loving it” is a boring, miscast, mildly funny parody that lacks any of the magic the famed director once had.

Let’s establish a key framework that is essential to understanding just HOW bad “Dracula: Dead and Loving it” actually is. The film is inexplicably tied to all of the other Brooks’ films before it. It is almost impossible to isolate “Dracula: Dead and Loving it” as its own thing, though I will attempt to review both here. The first thing we have to establish is that many of the aforementioned Mel Brooks films are an integral part of the comedic cultural zeitgeist, so much so that anything with his name behind it that doesn’t meet a certain comedic criteria is immediately weighed on the merits of his filmography before being tried as a standalone film.

Whether fair or not, things like “Spaceballs” and “Young Frankestein” have transcended so far above their contained parodies that they are icons of comedic cinema. Their characters, quotes and visuals are a part of decades of cultural relevance, so much so that even if you haven’t seen them, you’ve probably quoted them or called back to them without even knowing the film is the source. Brooks’ filmography is THAT entrenched in our culture, so when a film like “Dracula: Dead and Loving it” misses every single one of those markers set by the filmmaker himself, the film becomes ostensibly worse.

See, on its own, “Dracula: Dead and Loving it” is a run of the mill parody of vampire lore, particularly focusing on “Bram Stoker’s Dracula” from Francis Ford Coppola three years prior. The problem with this is that the film with which it’s based on isn’t culturally significant enough to warrant the flattery of parody in the first place. Sure, vampires are and always will be popular, and yes “Bram Stoker’s Dracula” was a popular, critically acclaimed film from an even more famous director. But aside from a terrific performance from Gary Oldman, it is by no means the definitive stamp on the genre. Yes, there’s plenty of Keanu Reeves‘ terrible British accent to take a few jabs at, but the film isn’t really iconic enough or memorable enough to be the one thing that needs to be mocked within the supernatural genre. Hell, “Interview with the Vampire” was released right smack in the middle of these two films, and while I do love it, there is way more there that warrants the Mel Brooks parody treatment.

As an example of how this works effectively (I promise I will talk about the actual film this review is about soon), take a look at “Scary Movie.” For better or worse, “Scream” transformed the slasher genre, spawning a largely successful sub genre of horror films that too this day can still find success at the box office. Even if the movie is too crude for your tastes, it is still taking a stab (pun intended) at a film that is and continues to be culturally relevant. What you parody matters, and “Dracula: Dead and Loving it” choosing a film that isn’t quite as important as many others makes its parody counterpart even less so.

At this point, you’d be right to ask why I’ve talked more about other films than the one that this entire review is suppose to be about, and you’d be right to ask that, kind of. See, knowing how good Mel Brooks CAN be and knowing what parodies SHOULD be paint a picture of all the things “Dracula: Dead and Loving it” gets wrong. There’s no Schwartz here, no classic musical number, no zingy one liner or boundary pushing social and racial commentary. There’s nothing but slapstick schtick that wears thin rather quickly from incredibly bored and underutilized actors (including Mel himself), and the idea that “Give him another enema!” is the last great gag to to be entered into the Brooks’ classic lexicon is just downright silly. The harsh truth is, you don’t remember “Dracula: Dead and Loving it” because there’s just nothing memorable about it.

Look, I wanted to like this film again. I started “Dracula: Dead and Loving it” with every intention to be the lone critic that loved it, and this review was going to be more of a “forget the naysayers” champion piece. But the longer the film went on, the less I liked it again, and the more I felt myself agreeing with the critics who lambasted it 25 years ago. Sure, there are some genuinely funny moments but they’re few and far between. I’ll even give you Peter MacNicol’s Renfield as the bright, shining star of the entire movie (I REALLY need to hurry up and finish Ally McBeal). MacNicol’s seems to be the only one who gets it, and his outrageous over the top performance is not only the highlight, but perhaps the only thing worth remembering.

All that being said, “Dracula: Dead and Loving it” has to be weighed against all of the Brooks films that came before it. In that regard, the film is just a shell of what former glory used to be. Please don’t misunderstand me, I absolutely adore Mel Brooks as a filmmaker, which is why “Dracula: Dead and Loving it” is just so downright disappointing. We also can’t escape the fact that this was his last film as a director, which matters. Think about this: If “Dracula Dead and Loving it” fell between “Spaceballs” and “Robin Hood: Men in Tights” it could probably be forgiven as a fluke or a minor miscalculation. That sort of thing happens all the time with great filmmakers, and they’re usually given a chance to redeem themselves.

But by “Dracula: Dead and Loving it” coming as the last outing, everything problematic becomes dialed up to 11 because it is the last impression we are given to remember him by. Thus we are forced to go back into his catalog and start comparing “Dracula: Dead and Loving it” to “The Producers” and wonder what went so wrong. Then, with nothing after it to redeem it, everything wrong with the film either marinates or disappears from the conversation entirely. It’s not fair, but I just can’t watch or critique the film any other way.

Even if you were to argue that my previous point about what is being parodied matters using “Scream” as the example, let’s pull from Brooks’ own catalog and use “Robin Hood: Men in Tights” as quick example. “Robin Hood: Prince of Thieves” is by no means a cultural catalyst for the genre or even the character, and probably subtracts from film more than it adds. But “Prince of Thieves” lends itself to parody because it BELIEVES in its own importance. People talk about how bad aspects of the film are even without a parody film to accompany it. This makes all of the silly things the film tries to sell its viewers as meaningful and important fair game for can can musical numbers and brilliant actors like Cary Elwes rip it apart scene by scene. Add in the fact that Elwes clearly loves what he’s doing, and you get a recipe for solid, memorable, consistently funny parody.

As a standalone comedy film, “Dracula: Dead and Loving it” is just ok at the best of times and largely forgettable the rest of the time. It has its few and far between moments of chuckles, but nothing gut busting or evergreen to be regurgitated poorly in conversations later. As part of the larger Mel Brooks filmography, it’s a black spot with the misfortune of nothing redeemable after it to keep what little we may have enjoyed a part of us. Brooks is so much better than “Dracula: Dead and Loving it.” It’s a shame that this is what he chose to end his legacy with.

And if everything I’ve discussed means nothing and things like cultural relevance and defining parody doesn’t matter to you in the slightest, allow me to put my thoughts into its most basic, boiled down perspective: “Dracula: Dead and Loving it” is so bad, I can’t think of single witty line or play on words to end this review with.

That should tell you everything you need to know.