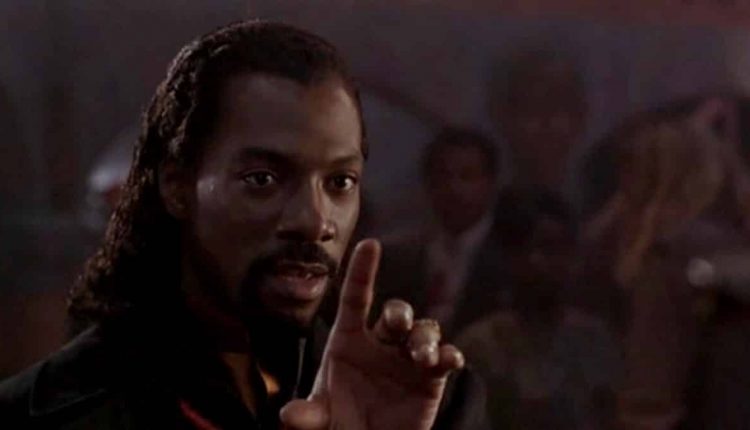 It does seem strange that of all the major releases in October 1995, “Vampire in Brooklyn” is the only horror film. Though more of a comedy/horror hybrid, the film has strengths and weaknesses in both. It certainly helps to have Wes Craven behind the camera, though one could argue “Vampire In Brooklyn” isn’t necessarily among his best.

Though critically panned at the time of its release, “Vampire in Brookyln” stakes its claim as a cult classic, delivering just enough laughs and some mild scares to make it a decent Halloween favorite.

“Vampire in Brooklyn” follows a Maximillian, a vampire from the Caribbean arrives in Brooklyn to seek and seduce a half vampire, half human woman. Rita is that woman, a homicide detective unaware of her vampire origins. Max, tired of being alone, believes that turning Rita is their destiny, and will stop at nothing to seduce her and turn her, thus making her the companion his longed for. Her partner, Detective Justice, has other plans, and begins to consistently throw a wrench in Max’s plan.

The story of “Vampire in Brooklyn” follows all of the beats and hits all of the tropes one would expect from a vampire film. The shapeshifting, the lore, the destiny to pursue a woman. It’s all here, the only difference is that layer of comedy added to change it up.

Surprisingly, though the story is by Eddie and Charlie Murphy, it was originally a straight vampire horror film. Turns out, it was Wes Craven who made the decision to add the comedic elements to the film. Not that Craven lacks that element in his filmography, it’s just surprising to learn that the Murphy brothers weren’t the ones that brought it to the project.

Wes Craven behind the camera is a smart move for “Vampire in Brooklyn.” Bringing a horror gravitas and (as we’ve recently learned) bringing the much needed comedic layer to the story, he elevates the film beyond what it is on paper. That’s not to say its firing on all cylinders, though. While much of “Vampire in Brooklyn” has a good balance of horror and comedy, that are a number of moments that tip the scales too far to one side.

The film doesn’t always work, but it doesn’t fall flat on its face either. “Vampire in Brooklyn” wouldn’t work as a straight horror or straight comedy, so a middle of the road reaction is the best it can hope for thanks to Craven.

I’m all for actors wanting to break out of their comfort zone and try new things, but “Vampire in Brooklyn” fails the most in trying to convince its audience that Eddie Murphy is a believable vampire villain. That’s not to say that Murphy is incapable of being anything other than a fast talking punchline machine. But here, his Maximillian seems more dead than undead. In turn, this makes his full blown comedy moments all the more jarring. Murphy donning a fast talking preacher and a fast talking Italian criminal (Murphy in white face, which I’ll save for a different critique altogether) seems like its ripped from any one of his other films. It is ill placed, and not where the strength of the comedy lies.

Really, the comedy that works lays with Kadeem Hardison (Julius Jones) who is turned into Max’s ghoul and servant. Hardison is having the most fun here, and he brings just enough ridiculousness to the decaying body to be easily the most enjoyable character, comedy wise. Angela Bassett (Rtia) is far more believable as the damsel in distress and coveted site of our antagonist. She seems to bring out the best in Murphy, as his attempt at straight acting is best when paired with her. It is my belief that Bassett is a vampire in real life, so it would make sense that Murphy plays his best vamp when in close proximity to a real one.

Lastly, one most give credit to the make up and costume design. “Vampire in Brooklyn” sports some impressive artist work, not just in changing Murphy to play other characters, but in increasing the decay of Julius to the final, haunting form of Maximillian himself. There always seems to be better longevity to practical effects over digital ones. “Vampire in Brooklyn” is proof of this, as much if not all of the practical effects and make up work hold up even 25 years later.

“Vampire in Brooklyn” is a run of the mill vampire tale with a lot of clout both behind and in front of the camera. Unfortunately, a superstar main character and an iconic horror director doesn’t always translate into the film you would hope. “Vampire in Brooklyn” isn’t bad, but it also isn’t great, either. No one can be faulted for loving it for the fun comedy/horror film it is trying to be, or choosing to never watch it more than once. No matter where you fall on the film, we can all agree that Italian food and dancing is key to any Halloween, full moon seduction.