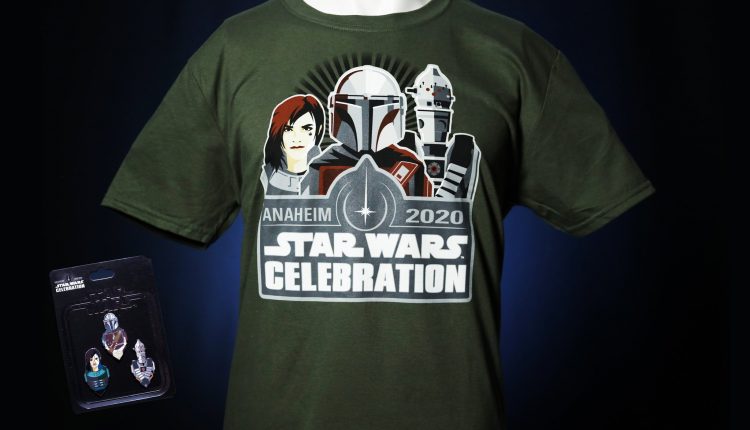 Even though we’re not getting to have our in-person events this year, some of the notable conventions are still providing their exclusives. San Diego Comic Con did their At Home online releases (and so did the various high ranking companies like Hasbro and Mattel), and now we know what Star Wars Celebration has to offer!

The official Celebration online store is open now for browsing, but not for purchasing yet. That’ll happen on August 28th for Celebration ticket holders at noon EST, and then on August 31st at noon for the public.

Some highlights that we REALLY really want include:

This massive ceramic mug measures 12 inches long x 4 inches wide x 5 ¾ inches high, and features The Empire Strikes Back logo on the front, and a “40” debossed on the bottom of the AT-AT’s foot. Strictly limited to 2,000 units worldwide, this Massive MEGA Mug can only be purchased through Star Wars Celebration.

First introduced in The Empire Strikes Back, mynocks have captured the imaginations of Star Wars fans for over four decades. These winged, cave-dwelling, power-cable chewing creatures are first encountered by Han Solo, Princess Leia and Chewbacca when they attached themselves to the Millennium Falcon inside of a cave (“This is no cave!”) in the middle of an asteroid field.

Now you can bring home a mynock of your very own with this limited edition plush, which includes a suction cup on its snout, allowing you to attached it to your favorite viewport. (Just keep it away from the power cables!) This 9” plush features a wire armature inside of its body so that you can pose it, including posable wings (which measure over 12-inches wide fully spread) and eye stalks!

This super-fun Star Wars creature plush is only available through the Star Wars Celebration Merchandise store, and only 1,500 units were produced.

Whether you drive an SUV, a sporty sedan, a pickup truck… or a modified Corellian freighter, you know there’s nothing worse than the hot sun (or suns) beating down on your transport’s viewport. Fortunately, we’ve got you covered with our Millennium Falcon Cockpit Vehicle Sun Shade.

Featuring the iconic character grouping from their adventures on the run from the Imperials in The Empire Strikes Back – from left: Chewbacca, C-3PO, Princess Leia and Han Solo –  this collapsible sun shade is sure keep your vehicle cool. (“Cool” as in “not hot,” but also “cool” as in “your friends will say how awesome you are”! See what we did there?)

Hoth Luke and a TaunTaun!

The Empire Strikes Back is a movie chock full of memorable scenes – but one stand out has to be the moment in which Han Solo saves the life of his friend Luke Skywalker on the ice planet Hoth, by keeping him warm inside of his recently deceased Tauntaun. (“I thought they smelled bad on the outside!”)

Now you can recreate that infamous scenes in the comfort (and warmth) of your own home with our adorable Tauntaun Plush with Removable Luke Skywalker. Standing at just over 12-inches tall, our Tauntaun plush features a zipper in his stomach (with a zipper-pull that looks like the hilt of Luke’s lightsaber), so that you insert poor, frozen Luke Skywalker.

Choose from either the O-eyed Tauntaun, or the X-eyed (deceased) version. Only 1500 units were produced in total, split evenly between the two varieties.

The Star Wars Celebration 2020 Pin Program begins here – with The Empire Strikes Back 40th Anniversary Hoth Pin Set & T-Shirt Combo! Featuring artwork by fan-favorite artist Danny Haas, this 3-pack of pins features Chewbacca and Han Solo in his Hoth fatigues, along with the Imperial probe droid, deployed to the ice planet to find the Rebel base… The set comes packaged with a navy blue T-shirt that includes corresponding artwork.

The 2020 Pin Program features over 50 beloved characters from throughout the Star Wars galaxy, with the rest of the line-up set to be released later in the year. These pins & T-shirts are available on a first-come, first-served basis – and when they’re sold out, they’re gone for good. They will not be offered again later in the year when the rest of the pins debut. Don’t miss your chance to get a jump start on your pin collection.

“The Mandalorian” pin and shirt set

The Star Wars Celebration 2020 Pin Program begins here – with The Mandalorian Pin Set & T-Shirt Combo. Featuring artwork by fan-favorite artist Danny Haas, this 3-pack of pins features the Mandalorian, IG-11 and Cara Dune as they appeared in the groundbreaking first season of The Mandalorian… The set comes packaged with a military green T-shirt that includes corresponding artwork.

The 2020 Pin Program features over 50 beloved characters from throughout the Star Wars galaxy, with the rest of the line-up set to be released later in the year. These pins & T-shirts are available on a first-come, first-served basis – and when they’re sold out, they’re gone for good. They will not be offered again later in the year when the rest of the pins debut. Don’t miss your chance to get a jump start on your pin collection.

So, those are just some of the items you’ll be able to purchase from the official Star Wars Celebration 2020 store.