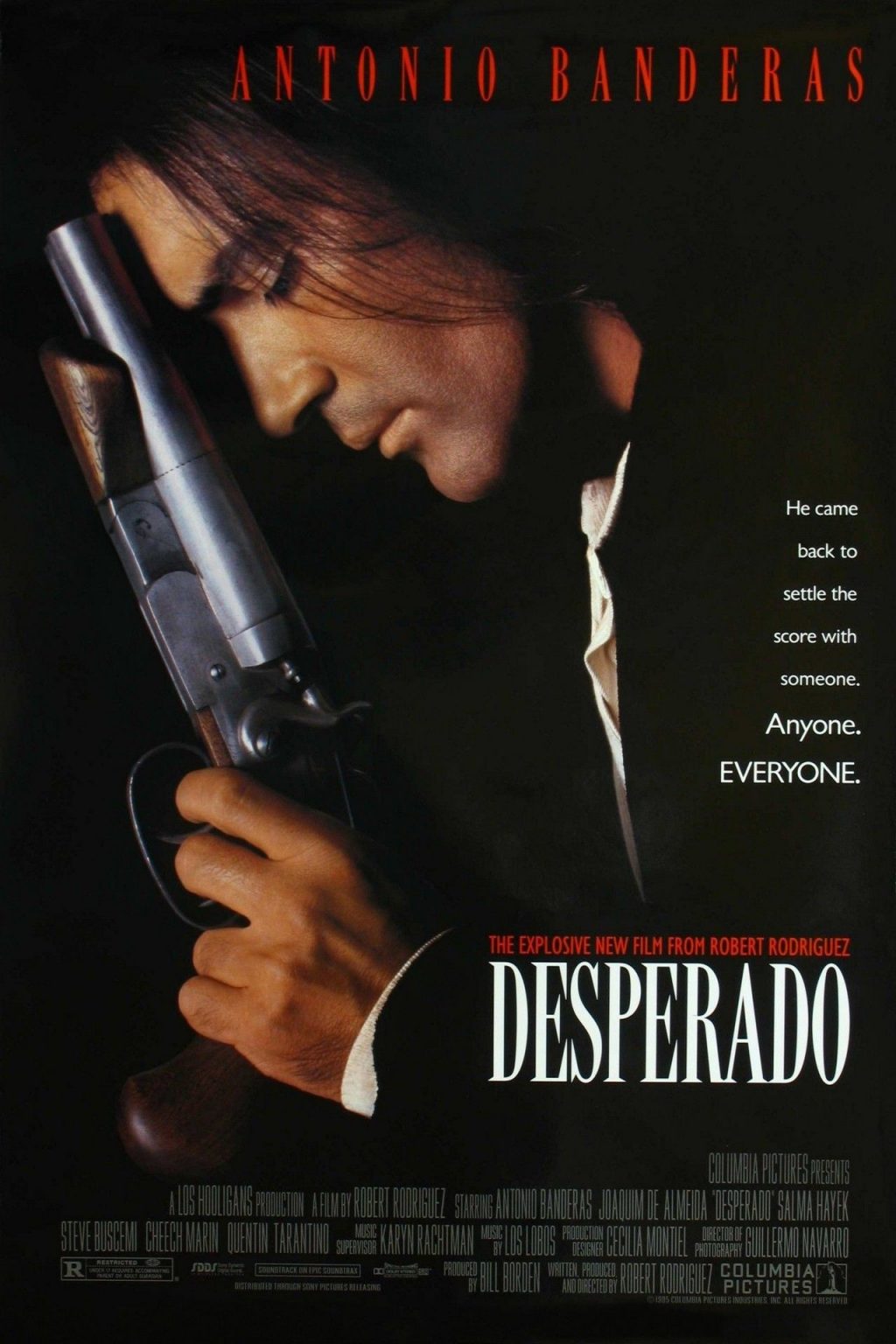 Every great director often has a defining film that encompasses everything they have to offer cinema. While the greats can do this more than once and make good on the hype that is often laden on them, there are number who seem to crack under their own greatness. Robert Rodriguez‘ “Desperado” is that film, the one that truly demonstrates all of his skills in one, single film. The simplicity and absurdity of the story and violence only add to its charm, and that credit can only be attributed to Rodriguez seemingly putting everything he has into the film. While Rodriguez has a number of great films under his belt, “Desperado” is something truly special.

“Desperado” is technically a sequel to Rodriguez’ independent, low budget outing “El Mariachi,” but can still be viewed as a complete standalone. It follows a mysterious man known only as a The Mariachi (Antonio Banderas), who is said to be going from town to town with a guitar case full of guns looking for revenge.

A prominent drug dealer named Bucho (Jaoquim de Almeida) is responsible for the murder of The Mariachi’s lover, and once he discovers Bucho’s main town of operations, the body count begins to rise in his pursuit of revenge. With the help of local bookstore owner Carolina (Salma Hayek) The Marachi will stop at nothing to find his enemy, even though the enemy is sending everything they have to stop him.

There is something to be said about the simplicity of a western revenge story set in Mexico set against the absurd, over-the-top violence that makes “Desperado” work so well. Rodriguez does a fantastic job in blending the two, an neither needs to apologize for the other. Somehow, it just works. This is also one of the only films to take place exclusively in Mexico and not have the sepia, yellow hue in every shot.

While the visual idea behind this is to demonstrate warm desert climates, that is not something you should notice 25 years later. There is also a charm to this film, heightened by its juxtaposition of a simply story with larger than life characters. There’s restraint here, something Rodriguez seems to lose sight of in the far too late follow up “Once Upon a Time in Mexico.” We are never given more than we need to, allowing us to relish in the outlandish western gun fights and humor.

As keen of a director as he is, the charm could not be pulled off by only Rodriguez himself. Another strength of “Desperado” lies in its young powerhouse cast. Relatively unknown to the larger American audience at the time, Banderas and Hayek are a powerhouse couple. Their banter and onscreen chemistry are a joy to watch, and it helps that they are both incredibly attractive.

It is no wonder that “Desperado” was a vehicle that helped launched both of them into the American spotlight, and deservedly so. additionally, the film also turns in fun supporting performances from Cheech Marin, Steve Buscemi, Danny Trejo, and the always villainous Jaoquim de Almeida. Everyone his having a lot of fun here, and it definitely shows.

Perhaps the films big draw back comes in the final act, which can be considered a bit lackluster considering the entire driving force is a showdown between The Mariachi and Bucho. While there is a terrific gun fight that ensues outside Bucho’s main compound (one that includes both a guitar machine gun and rocket launcher), once inside, we are given a major plot point revelation and then a fade to black. We only know who prevailed from final showdown from the scene that follows. This isn’t Rodriguez’ fault, as the MPAA had given it an NC-17 rating for its violence and requested the final showdown be cut down significantly or cut altogether. Rodriguez opted for the later, which takes away from the high octane thrill ride that much of this film is.

Furthermore, the revelation of the relationship between El Mariachi and Bucho seems forced needlessly overcomplicated. For a film that relies on its simplicity, this feels more like a lapse in restraint rather than purposeful inclusion. It also gives a glance into how messy of a story teller Rodriguez can be and eventually does become in his follow up.

It exists as a true to form western revenge story, and is heightened by its over the top violence and charming cast. These are the films biggest strengths, which is why the ending is a misstep not just for the lack of violence but for its stumble into complication.

While there are some who criticize the film’s lack of story and character development being hidden by strong action visuals, I would argue that these are exactly what make the film great. The gunslinger comes to down in search of revenge and chaos erupts. Asking why isn’t what this film is about. It’s a violent joy ride filled with dazzling action visuals, charming characters, and guns. Lots of guns.

This is a true popcorn flick- one that doesn’t need much more than sitting back and enjoying the ride. Unlike other ‘turn your mind off’ b-movie action films, “Desperado” doesn’t need to be justified to enjoy. It can simply be enjoyed on its own merits, and that is one of the reasons it’s so special. So call your friends, bring the guitars, and let’s play.