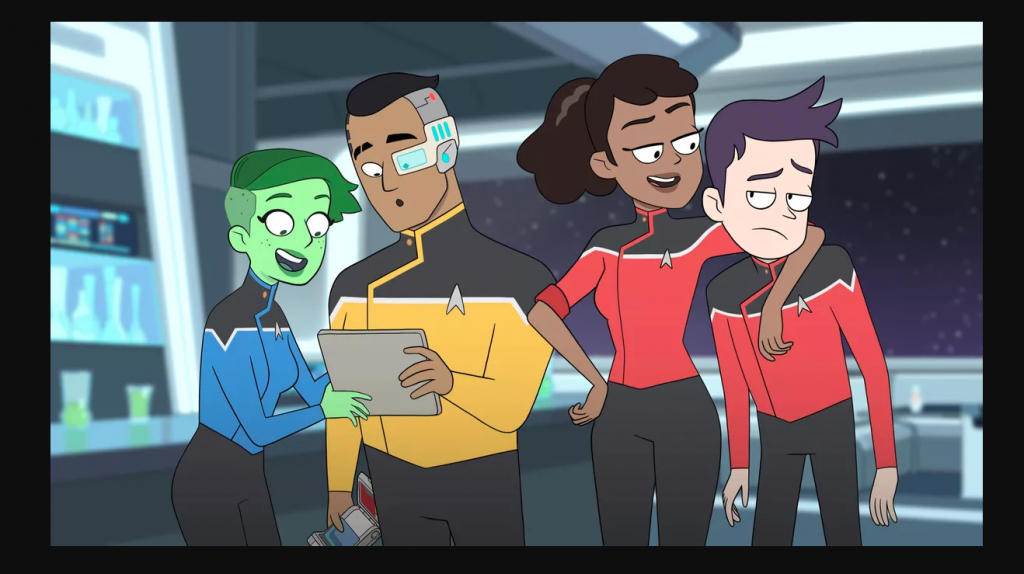 We’ve been looking forward to CBS All Access’s next generation of animated “Star Trek” since it was first announced, and we are so pleased to report that “Star Trek: Lower Decks” is really enjoyable!

If you are a “Trek” fan, you’ll no doubt find the same nods and callbacks amusing. If you’re a TRUE Trekkie, you’re going to catch so many little things! The opening credits alone were great.

“Lower Decks” centers on the crew of the USS Cerritos, a California class starship who’s main Federation of Planets mission is to conduct second contact. This is the followup to initial First Contact with a species who have recently managed to gain warp technology.

We first meet Ensign Brad Boimler (voiced by Jack Quaid) and Ensign Beckett Mariner (Tawny Newsome) in a fairly normal environment- Boimler is doing his self-assigned ships logs while hiding in a closet. Mariner is pretty wasted on Romulan whisky (which is blue, she points out), and hilarity ensues while she drunkenly goes through her crate of contraband, which of course includes a bat’leth.

We won’t get into too many details as you really should check it out for yourself. But, we WILL say there’s a rage virus, and various uses of typical Trek plot devices.

“Lower Decks” has got something for every Trek fan there is, and may possibly get new blood interested in the franchise.

New episodes of the series release each Thursday, only on CBS All Access.