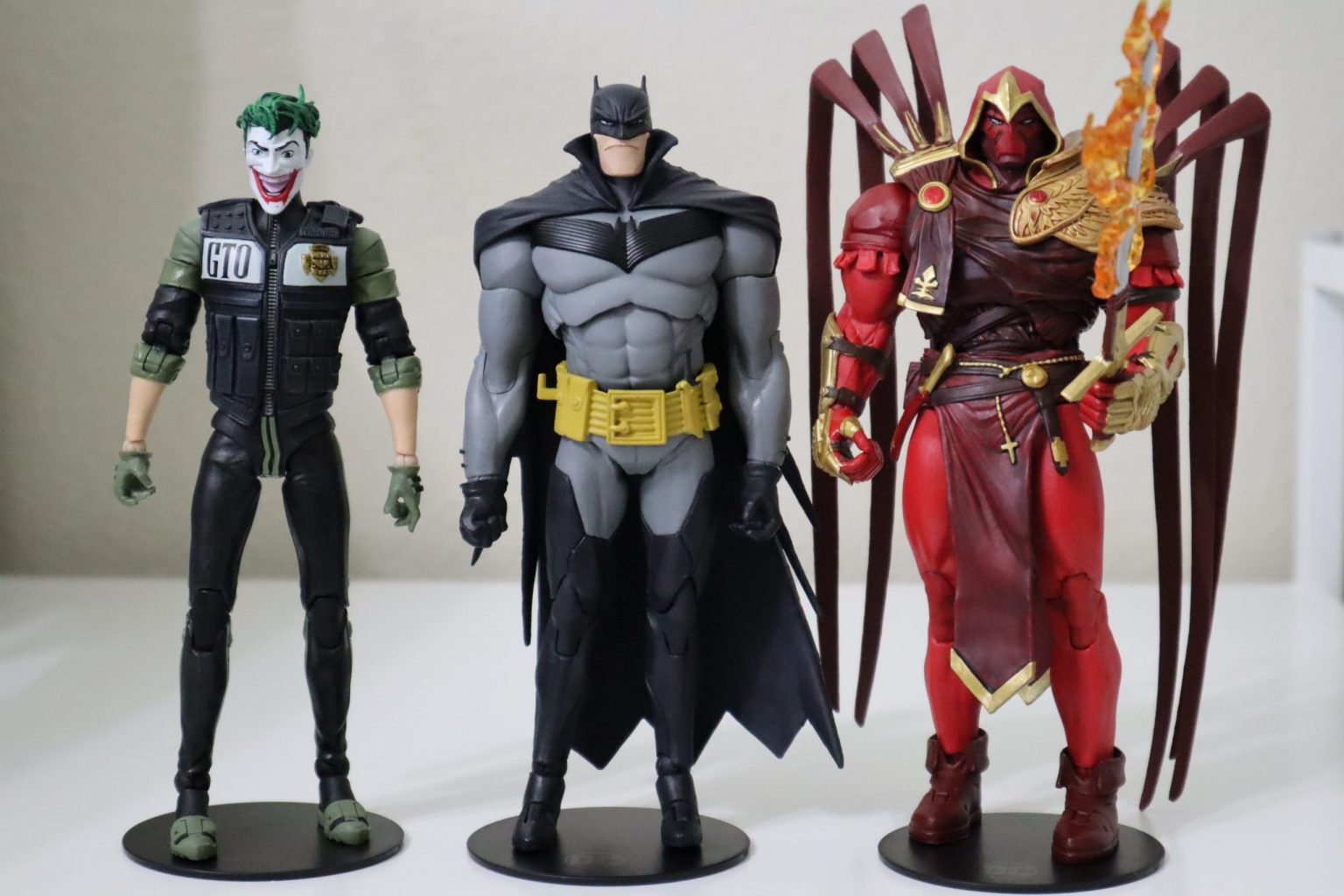 First of all, this humble reviewer would like to recommend that if you have not read Sean Murphy’s Batman: White Knight and Batman: Curse of the White Knight series, you ought to do that now. These are comic masterworks by one of the industry’s most talented and prolific veterans, and you won’t regret a single panel. I promise.

On a recent hunt for a new Joker figure (I ended up picking up the Arkham Asylum Joker — more on that later) I was shocked to find a White Knight version Jack Napier Joker already on the shelf. It turns out that the White Knight Series and Arkham Joker released just eleven days apart, leaving me to wonder if the White Knight series was rushed ahead of the comic trade’s upcoming early September release. A few days later, I completed the series set by picking up the Batman and Azrael figures. Bat Friends and Fans, I assure you, absolutely nothing about the action figure tributes to these iconic characters was rushed or left to chance.

From a design perspective these toys are absolutely perfect. The Joker dons his Gotham Terror Oppression uniform and includes an alternate Jack Napier head and a comic pistol complete with three inch barrel. Murphy’s Batman, arguably one of the most grim and tortured Bats of all time, wears his suffering in the thin line of his frown and the furrow of his be-cowled brow, details recreated almost lovingly by the McFarlane team. The Batsuit and accessories (a couple of Batarangs and Grapnel Launcher) are simple and clean, and the overall look is enhanced entirely by the smart sculptural elements of the Bat Symbol, Utility Belt and lightweight vinyl cape rather than elaborate paintwork. But let’s not forget that McFarlane Toys is an artist’s brand and we get all of the bells and whistles on full display with this stunning Azrael figure.

Guided by the belief that Gotham is his birthright and not-so-gentle nudging from a Gothamite with her own motives, Azrael takes the scene like the flaming sword he carries: a bit medieval, part vengeful angel and all warrior in his blood red cloaked and gilded costume. This character is a force to be reckoned with and McFarlane’s figure is a seemingly blood-soaked feast for the eyes. The gold accents of the costume have lustre and depth from the more intricately sculpted feather-look pauldron to the delicate rosary he wears around his waist. And, although Azrael is a monochrome character, McFarlane’s team didn’t miss an opportunity to add layers of texture with shades of red, creating the appearance of leather, velvet and silk rather than the simple spandex we’re used to seeing our heroes and villains wearing. Complete with vinyl strip “angel wings” and  a glittering longsword with removable flame accessory, Azrael is absolutely one of the most impressive figures I’ve seen this year.

Now, I am certainly no cynic, but when a complete series of toys looks as perfectly executed as these three, the realist in me can’t help but wonder what the catch is. Well, there are three, actually: two very minor and one, a bit bothersome. I’ll start with the least of these, the Jack Napier head. It really bothers me that the Jack head is grinning in a decidedly “Joker-esque” way (albeit not as maniacally as the actual primary Joker head). There is a clear distinction in the story between Jack and The Joker and this creepy grin is out of character enough to not suit the figure, so I won’t be using it.

The second hiccup appears to be a scaling issue. Remember the Arkham Joker I mentioned at the beginning of this article? Well he (also a fantastic figure in his own right) is the typical 7 inch figure we are used to seeing from McFarlane. I picked up the most recent McFarlane releases while back (the Wonder Woman ‘84 duo and Mortal Kombat 11 Spawn) and all were right on par with the McFarlane scale standard. I first noticed the issue when I put my Arkham Joker and Napier Joker side-by-side. Napier is a clear half inch shorter than Arkham Joker. Initially, I thought this was because Murphy’s Joker was drawn and written to be a small guy, and that is definitely reflected by the figure. But the scale of the series really begins to feel off with the Batman figure being a bit taller than Jack but still not reaching the full seven inches, as Azrael almost (but not quite) does. Now, this could all be just a matter of trying to make the characters size reflect their heights as presented in the book, but with Arkham Joker still being slightly taller than Azrael, these figures seem to scale just a tiny bit off of the rest of my McFarlane figs. It is noticeable, but since I won’t be displaying these guys with Wonder Woman, Arkham Joker or Spawn, it’s not that big a deal.

FInally, and this one is a bit of a bummer, but not entirely unexpected, Azrael’s golden pauldron obstructs the full range of motion of his left arm. This could have been avoided by constructing the Pauldron from vinyl, but because I don’t think that would have looked as good painted, and since you can put his sword in that hand, this also doesn’t end up being much of an issue.

So, while I started out just looking for a Joker to display (that Arkham Joker is awesome, and you should totally pick him up, too) I ended up the proud owner of one of the most beautiful and cohesive small series collections I’ve seen in a long time. This set is a complete success on almost every level and I can highly and enthusiastically recommend that you read the books if you haven’t and pick up these figures for your collection.