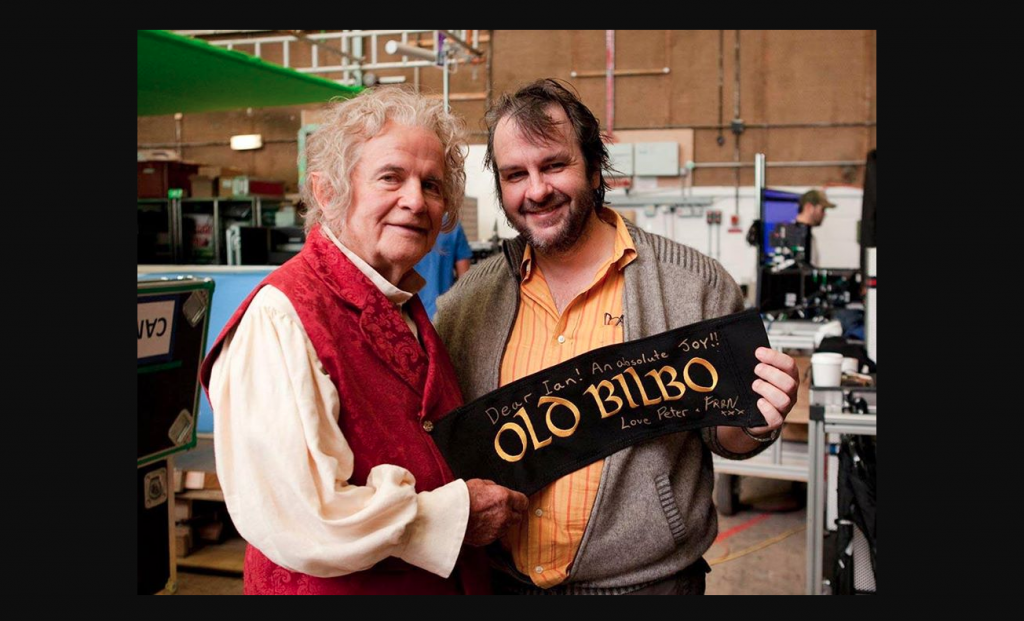 We’re all still coming to terms with yesterday’s heartbreaking news that Sir Ian Holm, legendary actor and seminal presence across some of the greatest films ever made, had passed at the age of 88 after an ongoing battle with Parkinson’s Disease.

You may remember him as Ash the android from Ridley Scott‘s “Alien,” or as Father Vito Cornelius from Luc Besson‘s “Fifth Element.” But, what you PROBABLY knew Ian Holm for best was his time in Peter Jackson‘s “Lord of the Rings” and “The Hobbit” films as Bilbo Baggins.

Which brings us to this beautiful and touching writeup Jackson posted just yesterday, sharing some memories of working with Ian.

Ian was such a delightful, generous man. Quiet, but cheeky, with a lovely twinkle in his eye.

Back in early 2000, before we started shooting our Bilbo scenes for The Fellowship of the Ring, I was nervous about working with such an esteemed actor, but he immediately put me at ease. Standing in Bag End on the first day, before cameras started rolling, he took me to one side and said that he would be trying different things in every take, but I shouldn’t be alarmed. If, after five or six takes, he hadn’t given me what I needed, then by all means I should give him specific direction.

And that’s exactly what we did. But incredibly his varied line reads and performances were all quite wonderful. He rarely needed direction. He gave us an amazing range of choices to select from in the cutting room.

We settled into a very enjoyable four weeks, as we shot the first 30 minutes of Fellowship.One day we had Bilbo delivering an account of his early adventures to an audience of spellbound three and four year olds, who are sitting cross legged at his feet in the party field. We started by filming Ian’s performance telling the story – but we also needed angles on the children reacting to various dramatic moments. But young kids get bored very quickly, and Ian and I quickly realised that they couldn’t hear the same story over and over again, as we captured the various angles we needed.

I suggested that to keep the kids’ attention, he should make the story a little different in each take … adding extras bits, making stuff up … so long as he gave us the essence of what was in the script. I told him not to worry and that I’d figure it out in the cutting room.

However, we also needed the kids to stay in place while we quickly moved the cameras around, from one angle to another. On a film set, “quickly” means 15 – 20 minutes. So, while this was happening, and no cameras were rolling, I whispered to Ian that he was going to have to keep them entertained. I helpfully suggested that he could, “tell them other stories between shots”. And that’s exactly what he did. After a couple of hours, we shot everything we needed.

It’s a lengthy tome, but well-worth reading. You can do that on Peter Jackson’s official Facebook page here.