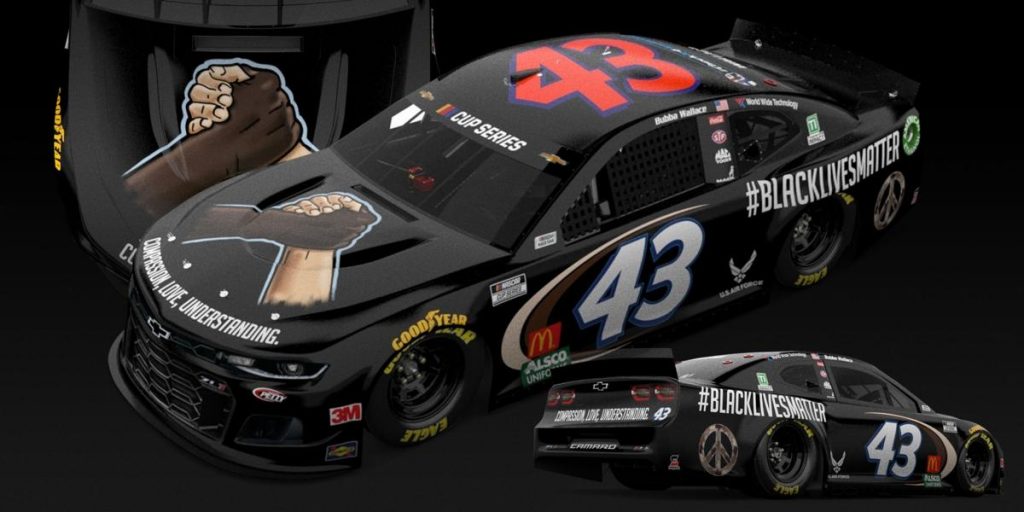 These times are very chaotic, and many people are expressing their views in many different ways.  Protests have taken the main stage.  Check out what the K-pop band BTS did to support the Black Lives Matter movement.

Bubba Wallace, a NASCAR driver, will display his support of the Black Lives Matter movement  through his racing.  Wallace is the first full-time African-American driver in the Cup Series since 1971.  He drives the #43 Chevrolet on the tracks for Richard Petty.

He announced that he would be driving in a Black Lives Matter themed car in the upcoming race at Martinsville Speedway.

The car features two interlocked hands on the hood, one white and the other black.  The words “compassion, love, understanding” are inscribed underneath the two hands.  They also appear on the rear bumper of the car.  It will also have the hashtag “#blacklivesmatter” on the rear quarter panels, as well as a peace sign composed of hands from all different races.

The driver recently wore an “I Can’t Breathe” T-shirt at a race to show unity with those who are calling for justice for George Floyd.  In addition, he succeeded in fighting to have Confederate flags removed from racetracks, as NASCAR announced officially yesterday. Several drivers joined Wallace in a discussion, officially sponsored by NASCAR, about the situation.

“There should be no individual that is uncomfortable showing up to our events, to have a good time with their family that feels some type of way about something they’ve seen, an object they’ve seen flying.”